Derby Girls and Prospects for a Renaissance on Madison

Madison is one of the most interesting streets in Salem.

It has history and diversity. With Mission on the southern edge, Madison represents the northern limits of the original downtown grid, oriented along the river and its steamboat commerce. Unlike Mission, which borders Bush Park, and a residential district, Madison also borders an industrial and commercial district, and contains links to the original Hollywood commercial center. Now a collector street, Madison crosses the barrier of the railroad and has traffic lights for crossing arterial streets. At one end it has the former Beth Sholom Temple, and at the other a mid-century neighborhood. Mid-point is the former Linen factory office, now the home of the Salem Leadership Foundation.

Full of connections, Madison should be a fertile border, a zone of mixed ecology, diverse uses, and innovation.

It's not quite there yet. Urban renewal in the Hollywood center certainly stripped it, and traffic along the arterials speeds through the neighborhood more than going to the neighborhood. The adjacent fairgrounds are a large parcel of land only intermittently used. As a City, we have frankly neglected it.

So it was very exciting to read that the Cherry City Derby Girls will be moving into a warehouse on Madison. 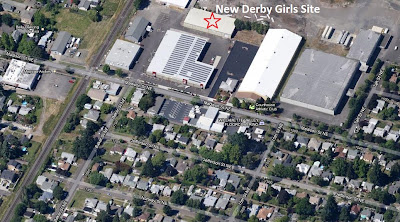 Tomorrow night the Hearing Officer will deliberate on the move.

The technical details may not be very interesting - and in fact, on the surface look like making something simple and obvious more complicated than it needs to be. The hearing has three pieces, for a "Specific Code Interpretation/Zoning Adjustment/Site Plan Review." Hopefully it is unproblematic, because it looks like it's a big serving of win all the way around. As the neighborhood association said,

[The] use of the space will actually help the neighborhood. Such wholesome activities must be encouraged...The zoning adjustments will be slight and as there is already an athletic establishment [the Courthouse] in the immediate area, this seems like an excellent match & a 'good fit' for the neighborhood."

I don't know if the Derby Girls really want to be known as "wholesome," but in the big picture, for the life of the neighborhood, it certainly seems true. It's hard not to see this as a small and welcome increment of gentrification. Visitors with some amount of discretionary income will be using it as a center of activity, and maybe it will help attract other kinds of small business and residential life.

The Derby culture seems to share a great deal with car and rockabilly culture, and it may be too much to think that significant number of people will ride bikes to the clubhouse. Still, the site is on the grid, there's not tons of traffic, and it will not be difficult to reach for short trips of two or three miles.

More than this, with it as a focus for young and young-spirited adults, the clubhouse and track could provide the critical mass of people and traffic for a small scale mixed use development, like what is envisioned in the new NCMU zoning. Salemites may not wish to model development on Portland's streetcar districts like Hawthorne, Belmont, Alberta or Mississippi, but Madison could offer a strong candidate for a thriving walkable neighborhood.

Madison has tons of potential, and it's exciting to see this.
Posted by Salem Breakfast on Bikes at 12:01 PM

What's in the building with all the solar panels on top? May I also suggest you get rid of the word verification widget? I tried it five times before I could break the code.

The building was the old linen factory - there's a link to an old photo in the body of the piece.

Currently, according to the plans in the staff report, it has two vacant bays and two occupied bays; in the two occupied spaces are an engineering firm and a dog obedience school.

As for the verification widget I'll look into that. I'm sorry, shoot! Comments are unmoderated and and allow anonymity, though, so that's the only filter against spam. And I do have to delete some spam occasionally. Thanks for the suggestion and observation that it was difficult.