On Council Monday are several things that remind us the ways that thinking in the short-term and early-process can create downstream and longer-term problems for the community.

I don't get this at all. Urban Development wants to hire at the airport - but the City has a budget problem!

In fact, it looks like a position would be funded not from new revenues, but rather from shifting city funds from one pot to another, from Public Works to Urban Development.

Ultimately there's not enough information in the staff report to evaluate this. But somehow I doubt that the fees paid to the transfer station will arise mainly from airport users. Instead, the costs for the airport staff person look like they would be shifted from airport users to people with garbage and recycling. And if Public Works is going to shift that money around for something not directly related to waste reduction, I think active transportation would be a better investment than air transportation.

(To be clear, I don't think that user fees always have to come back directly to users. My objection is that investing in the airport is an unwise and short-sighted investment that benefits too few.)

At Council two information reports on development plans show the ways that we cause problems for ourselves at the beginning phases of development, problems that externalize and defer costs (otherwise impose costs), on others downstream, making later mitigation or retrofitting necessary. These reports also show the limits of our atomic focus on individual parcels of property, failing to note that the parcels exist in relation to other parcels and depend on wider networks in the community and infrastructure, especially in transportation.

Or, you could just way, we shoot ourselves in the foot by facilitating sprawl. (There's no way to talk transportation without also talking land use.)

The City denied a proposal for a cul-de-sac in the Wallace Ridge Estates subdivision.

Basically, current planning standards seek to avoid excessively long blocks and cul-de-sacs in street patterns that offer few connections with other streets and other neighborhoods. So a cul-de-sac was denied.

The proposal not to connect Mountain Vista failed to meet the connection requirements.

But even without a dead-end, as you can see from the map, Mountain Vista will still offer a long block face! It's still hard to see this as a very walkable development. Our development standards still seem to permit roads and residential enclaves that hinder the easy movement of people.

Large Orchard Parcel to be Developed

In west Salem, the former Lindbeck Farms orchard will be developed and its subdivision for a 180 unit apartment complex, a 119 unit residential care facility, and a few single family houses, appears to be uncontroversial. 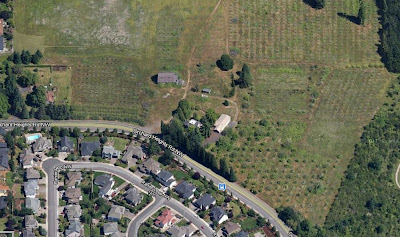 What is interesting here (and perhaps something to which in the past I have not given sufficient attention - people focused on development in west Salem may go "duh!") is way that large scale development puts pressure on the transportation system. Of course there are Transportation System Development Charges - but these are nowhere near the cost of a new bridge. The problem is that the TSDC are oriented towards incremental changes to the road system, not to the stair step function, the dramatic phase shift, of a new billion dollar highway and bridge.

Rather than externalizing costs in this way, if the City's determined to have a new big bridge, new development in west Salem should be assessed a bridge fee as a way of capturing accurately the infrastructure costs of serving that new development with cross-river movement. Tolling should also be implemented. This way, too, robust transit, bicycling, and non-auto mobility will be priced more accurately - and seen for the bargain they really are! With better pricing, better decisions can be made.

(You could also ask whether the density of 180 units would better support a mixed use development along the lines of what the NCMU zoning envisions. But that's another matter.)

* Again, I don't know if a blanket argument can be made. A growing population might need a new tap water supply, or a new wastewater treatment plant. New development might be seen as "off-loading" costs for these onto a larger population as well. But I would suggest, at least on the surface, that a better supply of tapwater and a cleaner treatment of city effluent could benefit all residents more clearly than a new highway and bridge, which has deleterious effects for the community.

More general arguments about growth will have to wait for another day.

In the Mill Creek Urban Renewal Area the City proposes to clarify widening projects on the Aumsville Highway, Kuebler Road, and Turner Road. There could be an opportunity here to make for better bike connectivity to Corban College and the industrial park, but it may be too far out from the city center to attract meaningful numbers of bike commuters. Still, there could be an opportunity here if the City wanted to grasp it.

Finally, last fall the Urban Renewal Agency amended the eligible project list to make public art not associated with a public building project a permitted investment. Now the agency proposes to add the oversight of purchases or commissions to the Public Arts Commission.

Salem needs needs more good public art! And unless they start going crazy with purchases - or someone can point out some nefarious wrinkle to the scheme - it seems hard to object.
Posted by Salem Breakfast on Bikes at 9:00 AM

And on the Downtown Advisory Board agenda for Wednesday is an art purchase:

"Should the DAB recommend agency board approval of $33,000 from the RDURA Vision 2020 Project Budget to purchase two sculptures for the Salem Conference Center Sculpture Plaza?"