Bike and Walk Salem Hearing in One Week

The Public Hearing for the new Bike Plan is just one week away! 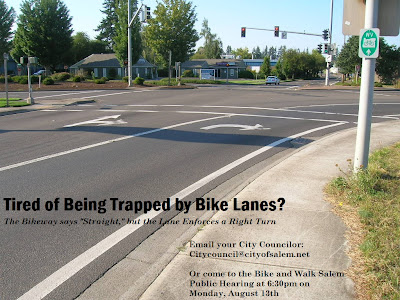 Just a reminder to talk to your City Councilor if you haven't already!

Also, talk it up with your friends, colleagues, and peers. With a couple of exceptions, the organized bodies of people who bike in Salem don't seem real active on the bike plan. There's little or no chatter on email lists, Facebook, Twitter. So be an Ambassador! Share the news! Twist some arms!

Here's some talking points:
The City Club of Portland is undertaking a study of bicycling, and advocates have created a convenient wiki, "The Case for Cycling." It's a pretty good resource for additional arguments and details.

Here's the City's Bike and Walk Salem site. For three years of notes on the bike plan update, see here.

Dual-turn lanes often trap people on bike in the bike lane with a forced turn. In order to get straight across the intersection as the signing for the Willamette Valley Scenic Bikeway indicates, a person must bicycle vehicularly and take the lane. (Notice there's no crosswalk even - this intersection is extremely unfriendly for people on foot and on bike.) Vehicular cycling is a tool available pretty much only to "strong and fearless" cyclists, especially when speed limits and design speeds, as they are here going onto the Parkway, get high.
Posted by Salem Breakfast on Bikes at 7:00 AM

Unfortunately in this town you have to drive vehicularly a lot of places, or you don't ride!