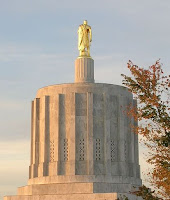 Did you know the Golden Pioneer has a column in the Salem Business Journal?

Me neither! But thanks to a reader, now I do!

It turned out to be an unexpected site for some third-bridge history and scepticism.

The Pioneer's tone is maybe cranky old wise guy and sometimes sage.  He's been around and seen it all.  A little jaded, perhaps.  His interest, it seems, is to looks at things mainly for freight mobility.

(It's not played straight-up, and it's hard to say exactly who is the audience and how strong the credibility and influence, however.  Still, it's an interesting critique, and maybe there is less business support, too, than we might fear.)

Looking down on the City for decades, the Pioneer this month observed some history.


I-5 was designed and built in the late 1950’s early 1960’s with the Salem Parkway already in the design, as was Salem’s “Third Bridge” across the Willamette River at Pine Street....

Fast forward to 1980-1981, and the City of Salem objected to the “Third Bridge” crossing the river at Pine Street. Next the Mission Street extension was considered. This option was to extend Mission Street (US Highway 22) with the “Third Bridge” crossing the river South of the current bridges and linking directly with US Highway 22, West bound....

The City of Salem and Marion County then opted for an overpass to direct Mission Street (East-West Highway 22) traffic over Mill Creek, and run the traffic between Willamette University and Salem Hospital on the North side of Mill Creek. Now Salem has all East-West truck traffic being directed through downtown Salem....

The “Third Bridge” is nothing more than a figment of the Salem City Council’s imagination, where it should remain.

It's also great to see marathon planning.  That will join the Monster Cookie and Peach as big event activities.  Maybe a Sunday Parkways is not far behind?
Posted by Salem Breakfast on Bikes at 7:00 AM