In a side conversation, the first words from a visitor at City Council last night were, "Did you guys lose some sharrows in an overlay on Chemeketa?"

In fact the life cycle of the sharrow, so short already, might be a fine template for the bike plan itself. Shiny and new, some enthusiasm, and now moving on to other things of more interest.

Last night Council kept the record open and continued the hearing on the bike plan. They took no action.

The key is not whether Councilors think it is a good plan or a bad plan. The key is not technical in this way. It is, rather, whether their constituents are clamoring for better facilities for people who walk and bike.

And the answer to this is plainly "No."

It was great to see Salem Bicycle Club President Larry Miles give valuable testimony, but there were only a couple of other club members in the audience at Council.

Here's the current home page for the club. It talks about advocacy in general, but the page says nothing about going to Council, writing Council, or the importance of the plan. It's no different on facebook or the monthly newsletter (which had only a small blurb in August). One can only infer that it is of secondary importance. Even if that's not true, that's what it looks like. 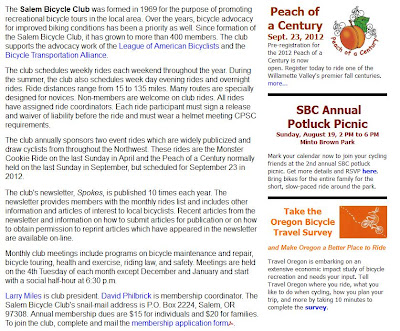 And this is not an isolated instance. There were no business leaders or others saying this is important.

So if I were a City Councilor, I'd look at all this and say,


Just how important really is this? The folks who are about to get foreclosed on and have to drive 30 miles to their job, they're not busting my chops for better bike facilities. And it doesn't even look like it's very important to the bikers at the bike club. I think this is just something cooked up for a narrow, narrow slice of hippie, smart growth bikers. Come back to me when you've got more support.

To be clear, no Councilor has said anything like this, but it seems obvious they just aren't hearing from folks that this should be a priority.

At this point, it's on advocates, on us. This is politics, unfortunately. If we can't persuade our fellow citizens - if we can't even persuade the bike club! - they should care about this, then maybe Salem has exactly the level of facilities it deserves.

We have a couple of weeks, maybe a month. It's time for a serious get-out-the-vote effort with real arm-twisting! There's really nothing more important for Salem bicycling. If you haven't done so, please email your Councilor at Citycouncil@cityofsalem.net. And get your friends and colleagues to do so. If you're on facebook, plaster the message around. Email your friends. Surely the moment is "all hands on deck."
Posted by Salem Breakfast on Bikes at 11:30 AM