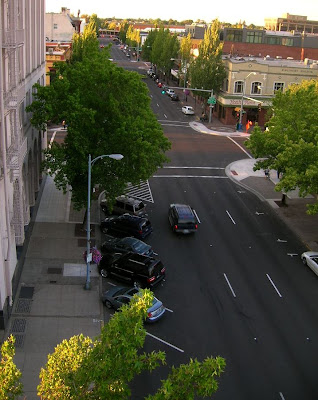 On a lovely summer evening, at about 8pm, the streets were mostly empty, downtown quiet and even in spots desolate. Would adding parking and auto capacity change anything?

Or is the situation actually begging for addition by subtraction?


On Wednesday at 5:30pm, the Salem Downtown Partnership is hosting an open house and presentation on the greenway and streetscape plan. It will be the Grand Ballroom (4th floor), 187 High Street NE.

They'd like a count, so please email the partnership to RSVP.

The greenway and parks project would reduce auto through-put in many cases and give some of the right-of-way to people on foot or on bike.  For most hours of the day, downtown streets don't have much traffic (see this video of State Street!), and it seems likely that they can be rejiggered positively - in ways that will actually increase the number of people downtown, while maintaining or even decreasing the number of autos downtown.

Some of the rhetoric around the project talks being a regional draw.  This points to the one reservation I have.  I hope the focus stays on the street and pleasant mobility for Salemites, and not on botantical tourism from afar. The streets should remain as a means, as a way to improve connections, and not viewed so much as an end, a tourist destination in and of itself.


Smith sees Salem as having an advantage similar to the city of Victoria, B.C., which benefits from the Buchart Gardens, the same distance (16 miles,) as The Oregon Garden is from Salem. ”Having major landscape downtown will draw some of the 80,000 botanical tourists who visit The Oregon Garden every year,” she says. “Once here, those tourists will sleep in local hotels, eat at local restaurants, buy gas and visit other attractions – just as they do in Victoria.”

The Oregon Garden has constantly struggled and probably shouldn't be a model. If there's a tourist attraction to downtown, shouldn't it be related to the stock of historic buildings, and not a gardenified street? The whole "Lord & Schryver" angle also seems a little fussy and formal, too much modeled on European formal gardens and the aspirations of a provincial gentry from the last century, and not enough on a kind of Northwest urbanism for the 21st century.  But perhaps the nod to the landscape and garden designers is just a catchy slogan rather than substantive borrowing.

These are small details, and the overall vision is exciting. Hopefully Salemites will collectively be able to gather around a vision for real change and connectivity in downtown!
Posted by Salem Breakfast on Bikes at 6:00 PM