The Salem River Crossing Task Force last met on July 24th, and tonight members meet again for the third and final time as they try to select a locally preferred alternative.

The meeting is scheduled for Wednesday, August 15 from 5:30 to 8:30 pm at the Salem Public Library, Anderson Room (585 Liberty Street SE).

There's a bunch of new materials posted to the task force's web page.

Here's the bridge bracket with eliminations to date added: 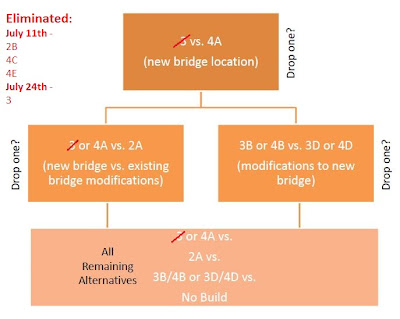 It's interesting that the no-build gets a "bye" in the earlier rounds and appears against the "best" high-build option. For skeptics of the need for a giant highway and bridge, it should triumph over the folly of the "strongest" case for the big build.

But I expect that the rhetorical move will be to say - "you've gone this far, now are you really willing to tank it all and say that the no-build is best?" By placing the no-build at the end, the process may bluff a bit, and hope to ratchet up the drama and tension.

At the same time, it appears already that no single alternative will prevail as "preferred alternative." An early tally at the July 24th meeting:

In lieu of a preferred alternative, the consultant team is preparing a "feedback memo," which will detail the range of opinions on the non-eliminated alternatives.

There's also a tally of comments on the draft EIS and informal poll. Just reading them, they are not easy to understand. The percentages corresponding to the first column below (marked with the "no build" flag) sum to 191.9 rather than an even 100, so without more explanation it is not possible to say what they mean exactly - but as with the task force, there's no single alternative with a commanding majority. 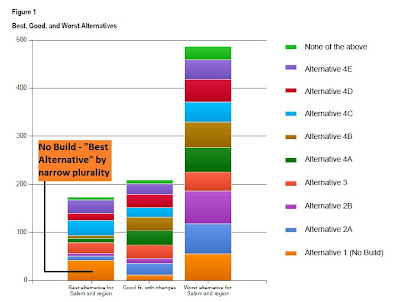 The meeting notes (July 11th, July 24th) themselves are somewhat interesting, and it is good to see a number of Task Force members raising and reiterating concerns and objections. At the same time, some of the statements by staff are non-sensical or wrong. For example, in discussing the funding, one staff person said:


TIGER grants have $500 million grant minimum now, so not sure if cost is such a big factor with Alternative 3.

But this is not true! According to the USDOT,


On June 22, the U.S. Department of Transportation awarded nearly $500 million from the TIGER 2012 program to 47 transportation projects in 34 states and the District of Columbia.

The $500 million is the total grant amount, not a minimum for a single grant! This misstatement is indicative of the funding fantasia under which boondoggle boosters labor.

If you go, there is time for public comment, and at the meeting on the 24th, one person presented interesting studies and policies from the 1980s and 90s that he sugggested were being ignored or minimized.

Since the Task Force does not appear likely to achieve consensus and land on a single preferred alternative, the Oversight Team will probably freelance rather than pick "no build." Perhaps they're the ones least able to say, "we've gone this far, but nevertheless we're going to pack it in for the most sensible option, the no-build choice."

Of course, in any non-boondoggle process (one not hard wired from day 1 to produce the desired outcome, the most expensive boondoggle that the folks standing by with wheelbarrows to haul off the cash think they can sell), the requirement would be that the alternatives to no-build must beat no-build by an extraordinary and scientifically sound margin, evaluated in light of all regional funding demands.

That is, rather than asking people to consider hypothetical routes with imaginary total cost figures that have been carefully sanitized to avoid alarming the taxpayers, an honest project would present each alternative to no-build with its corresponding figures for gas tax hikes, tolls, property tax hikes, and auto registration fee hikes, and it would present them in a way that would also show the voters the other capital expense demands in the affected regions, particularly in the Marion-Polk area where the boondoggles are salivating over hiking the property taxes countywide to build themselves a tidy income stream.

The goal of the boondogglers is to use the anchoring effect, where people can be sold outrageous crap so long as you get them playing along with questions that foreclose critical thought, such as "which of these imaginary free bridges do you prefer" rather than, say, "how many teachers, cops, fireman, and parks should we layoff and close because we took all the money out of those programs to give it to the Highway Department so that they could funnel it to contractors to build an auto age relic?"

I was at the meeting tonight and the final vote of 22 Task Force members was 10 for Alternative 4D which is a new bridge that connects Hwy 22 to the Salem Parkway (the most expensive of the options still under consideration), 7 for "no build, 3 for other widening and bridge options, and 2 abstentions. A report with pros and cons for all 5 final options that were considered will go to the Oversight Team made up of elected officials for their meeting on August 23rd. They are free to do whatever they want with the input from the Task Force. I thought the "no build" adherents on the Task Force were very articulate in their reasons for opposing a new bridge. The cost-benefit ratio is bad, the disruptions to neighborhoods are bad, and you'd have to ask 160,000 residents on the east side of the river to pay for what is mostly a problem for the 25,000 residents on the west side -- a non-starter.

Thanks for the update, Jim! I couldn't make it, alas.

Do we know who the Oversight Committee members are? Is it worth emailing them and emphasizing our choice? For me, it's the "no build" option. Jeff

Jeff, all the information about the project is at .

Most of the Oversight Team are on Team Boondoggle, unfortunately!

Clark says on the same strategy:

"Carbon taxes are arbitrary and punitive. offer real options that have real benefits. Citizens are savvy consumers; we will choose efficient, cost-effective modes. Carbon taxes are designed to take away our choices arbitrarily."

And this is what they say in public comment!

The flip side of these sentiments, as you might imagine, is support for massive roadway expansion projects.

I don't think that the Oversight Committee is all that interested in critical inquiry, therefore. As Walker points out, the process is "hard wired from day 1" to produce a certain outcome. The dice are loaded, the process is rigged.

It will be interesting to hear what others have to say, but I suspect that our efforts for rational transportation policy are better directed not to this particular Oversight Committee decision but rather at other decision points and moments in the process.

Any politician who gets behind tolling, property tax increases, gas tax increases, Federal earmarks, etc. (most or all of which will be necessary to pay for Alternative 4D) is destined to run into a wall of public opposition. I say bring 'em on!