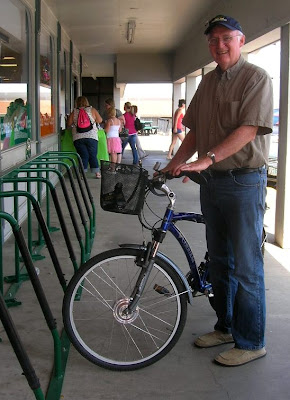 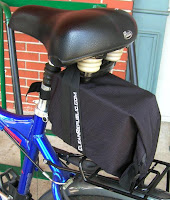 In the sun is no better time to be on a bike!

At the LifeSource Resource Fair yesterday, we got to talk with retired State Librarian Jim Scheppke, who was there to talk about KMUZ. He also showed off his new battery assist!

It's a front-wheel drive and required only that he swap in a new wheel. The battery is secured under the saddle.

For him it's been hugely liberating, and has made the bike the preferred vehicle for short trips during the summer! It's the difference between a hot and sweaty slog up the hills, and a relaxing ride to take in sights, sounds, and smells.

(In the Sunday paper, there's also a nice piece on Jill Summers, who doesn't have a car and uses her bike for transportation!) 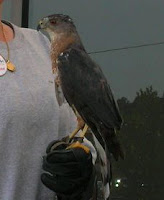 Also at the fair were folks from Turtle Ridge. They showed off birds from their educational flock of birds too injured or habituated to humans for rerelease in the wild: A juvenile crow, a red-tail hawk, a kestrel, and a cooper's hawk (pictured).

I often see a red-tail and a much smaller hawk (a sharp-shinned, I think) in Bush Park. This year I have also followed a pair of small hawks, also sharp-shinned I believe, who have nested in a very urban site in downtown Salem! One day I counted two adults and three juveniles. I've also seen adult bald eagles not just at Minto or by the river, but one day even soaring above the Capitol. Cheezy, perhaps, but remembering the ravages of DDT, it was moving in both an environmentalist and patriotic way.

After the fair it seemed logical to visit the cemetery. 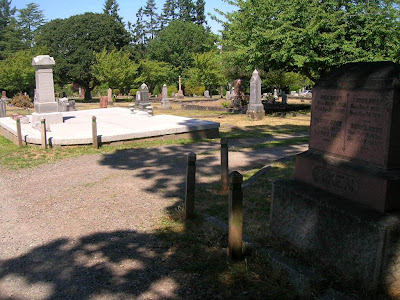 Elisabeth Potter and other Friends of the Cemetery were there, and I chatted with Elisabeth some about her upcoming testimony to Council on the Cemetery. She remained adamantly opposed to a path connection, but we had a friendly conversation.

On leaving the cemetery, I noticed bollards at a curve. One of the plots had new granite curbs and a new concrete topper over a vault. I can't remember what it looked like, but I believe that folks in cars had cut the corner too closely, and damaged the curb and top. In the photo the nearside plot (in shade) has sustained damage to its curb as well.

In Potter's letter to Council for Monday, she mentioned two recent instances of likely vandalism, monuments toppled in February and April of this year.

It seems to me that the current system isn't working as well as it should, and that Friends of the Cemetery ought to want to explore ways to make it better, not to retrench over a system that has some visible flaws. 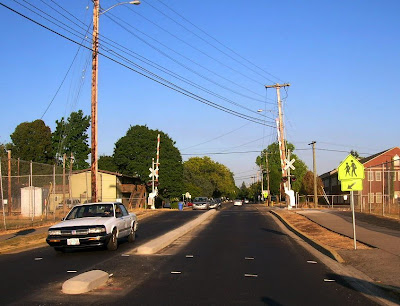 In what appears to be part of the Rail Quiet Zone improvements, there's a new curb channel on D Street at the rail crossing. D street narrows down at the crossing, and in its previous configuration the yellow line did permit cars to pass. Now there may not be enough room for a car to pass a person on bike, and it will be necessary in many cases for a person on bike to take the lane in order to discourage an unsafe pass.

The City should strongly consider sharrows at locations like this where concrete creates a restriction in lane width and single-file traffic becomes crucial.
Posted by Salem Breakfast on Bikes at 11:00 AM

Thanks for the nice post about me and my bike! Question: why did I have to go all the way to Portland to buy this Hill Topper electric bike conversion ? I think one our great bike shops in Salem ought to sell this. You could promote it to older folks like me as a way to get back into using a bike as our primary means of local transportation. I think it would sell well here.

My wife and I ride through that section of D street almost every day. We always have to take the lane (no other choice) and then turn on/off of Garnet st. This MIGHT help stop people from trying to pass when I am clearly signaling to turn left. I will update when I figure that out. Sharows would be a great thing all the way down D st. where there is no bike infrastructure!