Seeking Comfort: From an Omafiets to a British Three-Speed

But one that you should be reading if you're not, is the Upright Cyclist. Having adopted the "nom de blog," B+, the writer maintains a low profile. But B+ offers great perspectives on life and working with and around the constraints posed by bike transport. 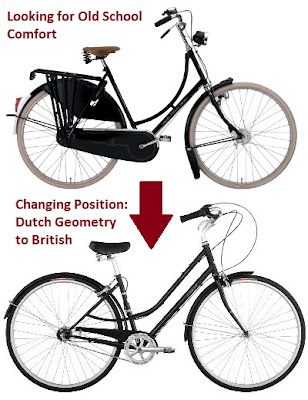 I have often plugged the Dutch geometry. When I have taken bikes on short rides, I enjoyed the increased visibility and relaxed posture. But I have never commuted on them or done significant amounts of hill climbing.

It turns out there might be a significant constraint on their usefulness around here.


I had the opportunity to see and ride a splendidly-equipped Dutch bike and immediately took to its fully-upright riding position, as well as its solid construction and excellent components for all-weather cycling. At first all was delightful. Then, gradually, it became clear that my knees are more "English" than "Dutch." The slack seat tube angle on the Dutch bike meant that I could not get up out of the saddle to "pump" when taking off or going uphill, and in general I found that this position was not agreeing with my legs.

It seems likely that this geometry is better suited for the flats of north and east Salem, and that other geometries are necessary for the hills of west and south Salem.

B+ also writes about community, philosophy, and spirituality:


Utility cycling makes a form of sauntering possible. Unlike some cyclists, I don’t travel quickly on my way, head down and straining. I move through the topography with a lot of intentionality, varying my route slightly all the time, exploring here and there, greeting people and not infrequently talking with them. The bicycle becomes more than a means of transportation—it actually becomes a way to participate in our world, which is really a low-key act of resistance to the passivity and isolation so common today.

Over the summer B+ has been working through some of the hardware and mechanical details of the new bike, and writing about further explorations on the new bike.  It's great reading.  Check it out!
Posted by Salem Breakfast on Bikes at 12:01 PM