Volunteer Recognition and Downtown Advisory Board this Week Today at 5pm the City of Salem will hold the annual volunteer recognition in the plaza between the library and civic center.

The Bike and Walk Salem Advisory Committee has put in a lot of work and their work is almost, almost done! Its members deserve a hand.

Even more, how about the members of the River Crossing Task Force? They've sat through even longer meetings, sometimes - or even often, depending on your perspective - enduring a biased process. We probably don't give enough credence to the corrosive effects of public processes that aren't always aimed at truthful and optimal outcomes. When the dice are loaded and the theater absurd, it's sometimes hard to avoid the cynicism and other bad feelings. So the members deserve special thanks, especially those who spoke up critically and stood up to the nonsense.

On a lighter note, you'll also get to see our Director of Public Works play in his band! 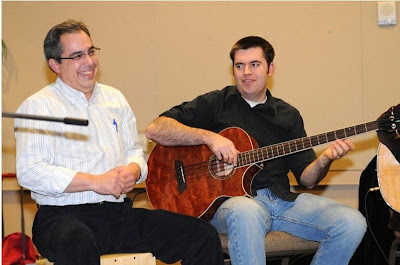 Audiolenz has several other City staff - but of course Public Works is especially important to people who bike!

Listen to Audiolenz on youtube! So bike on over, say Hi to Peter, and say thanks to the Salem volunteers.

Also! Thursday the Downtown Advisory Board meets at noon in 295 Church Street. They'll get an update on the Minto Bridge and Path; talk about the Downtown Parking Task Force; and learn about downtown vacancies and the grants and incentive programs to combat the vacancy.

Elsewhere, Portland has announced the plan to plaster 20mph designations all over its neighborhood greenways.

This new 20 mph speed designation enacted in House Bill 3150 will make the 20mph zone 24/7 - not just during school hours like a school zone designation.

There are a few restrictions: The streets must carry fewer than 2,000 cars per day, have the speed at which 85% of the traffic is traveling lower than 30 mph, and have pavement markings like sharrows to indicate the presence of people walking and biking.

Salem traffic engineering is reluctant to initiate use of this tool, so it's on neighborhood advocates to press the City when it such traffic calming is desired.  It could become part of the family friendly bikeway system.
Posted by Salem Breakfast on Bikes at 9:00 AM

The Oregonian says it is 70 miles worth of greenway signed for 20mph.