If there's something we ought to be able to agree on, it's that the lack of consensus on the Salem River Crossing alternatives suggest the universe of formal alternatives doesn't actually meet real needs.

The Salem River Crossing Oversight Team meets on Thursday, August 23, 2012 from 12:00 to 2:00 pm at the Mid-Willamette Valley Council of Governments (100 High St. SE, Suite 200, Salem), to start working on a final "locally preferred alternative" for the "record of decision." (See the Citizens Guide to the NEPA for more on the process.)

The agenda suggests the process will go well into the fall - and given the track record so far, winter or even spring of 2013 seems more likely.

It doesn't take a complicated thought experiment to show the problems. Again, spending $75 million on 25,000 battery-assisted e-bikes, one for every citizen of West Salem - that would solve a lot of problems: Reduce greenhouse gases, reduce automobile congestion, improves freight mobility, improve emergency vehicle response, and cost a lot less. Other solutions that more accurately meet the purpose and need are not difficult to accumulate. (And better ways of articulating the purpose and need are possible, too!)

The alternatives on the table, however, show a poverty of imagination. They are all from the 1950s, big highways and bridges, a legacy of Eisenhower-era thinking. None of them are likely to meet the real needs of citizens in 2050 or 2075. They all look backwards, imagining a world of more of the same, rather than forwards, a world in which there will be important differences in mobility and resources constrained and allocated differently than they are today.

If one of the alternatives was really forward-looking, we would certainly see something closer to a consensus - probably not unanimity, but surely a more of a majority.

The Task Force was deeply split.

The final memo summarizes opinions on the alternatives that made the final cut.

Here's the summary on the most popular - and most expensive - 4d: 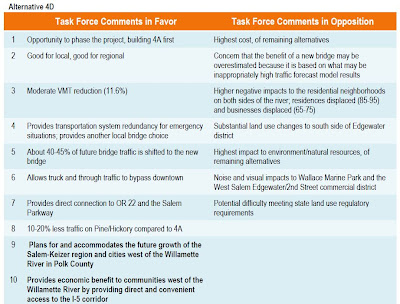 One of the things that maybe is a little clearer her is how much damage Salemites are asked to sustain for people who don't live in Salem: Displaced businesses, homes, and families; increasing local tax burden at the same time we are making cuts in schools, fire, and police; the cost to riverfront parks and natural areas.

There's not much here, actually, for people who live in Salem. (If it's jobs you want, a public works project to pour missing sidewalks would generate far more local jobs at a lower cost than a massive highway and bridge project, by the way!)

And the process has not been intellectually honest. The modeling is suspect - again, it uses the very same modeling of the CRC, and even the State Treasurer, hardly a contrarian figure, has suggested that the modeling is inadequate in important ways, and uses 20th century assumptions rather than our best guesses at 21st century conditions.

Equally important are the straw men, chief of which is transit. In no way has a robust transit component been looked at. Instead, analysts used two park-and-ride lots to make sweeping conclusions about transit's inadequacy. (It will an unsurprising irony if the Oversight Team looks at, but does not register, the Oregon Electric tracks possibly visible from the window at State and High.  Fortunately, I understand one of the Team is aware of them, and took pictures.)

So it may or may not be an exaggeration to say the process is rigged. But it's certainly biased.

(Bridge supporters might point to the just announced "expediting" of the CRC, but as Willamette Week points out, the same thing was done 4 years ago. It's just rhetoric, not funding.)

As the Grant Neighborhood Association wrote in their public comment,


If Salem cannot afford to run buses on weekends, how can we support another river crossing? And if we are financially capable to support another crossing, why not use those funds to support and improve our current infrastructure, invest in alternative transportation and raise the quality of life for our residents?

For more on the River Crossing see a summary critique and all breakfast blog notes tagged River Crossing.
Posted by Salem Breakfast on Bikes at 11:52 AM

Non-Motorized Majority
Sometimes a look or two to the past can be an inspiration when considering policy choices like a Third Bridge for Salem. Going back even farther in time than the days of Oregon Electric Railroad, what was the “traffic” crossing the bridge to West Salem 100 years ago?
There is a published count of traffic in 1916 that shows less than half of the crossings were by cars. (Even if there was agreement on a mega-million dollar option for the Salem River Crossing and money fell from the sky, it would take until 2016 to open.)
The Daily Capital Journal reported on October 16, 1916 the results of a month long census of all bridge users. It showed the 21,008 cars were outnumbered by 24,165 horse drawn vehicles, motorcycles, bicycles and pedestrians. The count did not separate out the bicycles from the other users, but maybe there will be a day in the future when the majority of the crossings will once again be non-motorized (not counting walkers or battery-assisted e-bikes).

Great post! I sincerely wish you would boil this down to 500 words and send it in to Dick Hughes at the Statesman-Journal. Their coverage of this issue has been very inadequate. Maybe they realize that and would give you a few column inches on the opinion page. I attended two of these meetings and got the distinct impression that 4D was mostly about improving "regional" traffic flow, and so your question about why Salemites should pay for it is right on. I think it would enable stupid things for Polk County folk like a faster trip to the Woodburn Outlet Mall or even to jobs in the Metro area (at least until gas hits $6 a gallon, which it will, maybe sooner than we think). I think these are the kind of things that proponents are thinking of. We need to discourage these 20th century behaviors that are killing the planet, not enable them.

@Anon - Isn't that historical traffic count great! And it deserves even wider circulation. In retrospect we've really shortened up the adoption curve of the car, making seem as if all of a sudden people were driving cars everywhere, but of course for many years horse-drawn wagons and carriages remained important. Not to mention bikes and streetcars. Do talk it up!

Though it's buried a bit, you'll also be delighted to know that this same document is included on p. B-7 in Appendix B - Travel Characteristics, of the 2011-2035 Regional Transportation System Plan of our Metropolitan Planning Organization.

@Jim, thanks for the kind words, but the Breakfast Blog is just scholia! A compilation of dribs and drabs. Hopefully the Task Force members, who know so much more, will themselves go public now with a determined and incisive critique of the process and its products. One of the on-going debates we have, too, is message vs. messenger, and I have come to the conclusion that as advocates we sometimes spend too much time on the technical and rhetorical details of an argument, as if saying it better (and louder) will be more persuasive. But persuasion seems to be more effective with the right messenger, no matter how well-crafted the argument. We need to find the right business/political/cultural leader to articulate the case!

Certainly, one thing I don't understand is why downtown merchants would want a by-pass that would make Keizer Station and the Woodburn Outlet mall the preferred shopping destination.

It's all because we're asking the wrong question, a question about cars, and not asking how we provide mobility for people, many of whom will use cars, but not all.