Portland's Pedalpalooza started last night, but the biggest news might be the high-brow/low-brow marriage between the Portland Art Museum and the World Naked Bike Ride!

Opening at the museum this weekend is Cyclepedia:


Drawn from the collection of Vienna-based designer and bike aficionado Michael Embacher, this special exhibition features 40 bicycles—racing, mountain, single-speed, touring, tandem, urban, folding, cargo, and curiosities—representing every decade from 1925 to the present, each chosen by Embacher as examples of pivotal moments in the evolution of bicycle design.

The museum imprimatur might remind us of the lost opportunity at ODOT headquarters for bike-related public art. If it's good enough for the Portland Art Museum, why not for the renovated Transportation Building?

But it's not just about art!

Back in April the Museum announced that in a cooperative venture with the World Naked Bike Ride, the ride would start at the Museum and would include a special admission for ride participants, naked or otherwise. Admission is only $1 per article of clothing! That's free if you're in the buff.

The Museum opens at 8pm and the ride starts at 10pm. 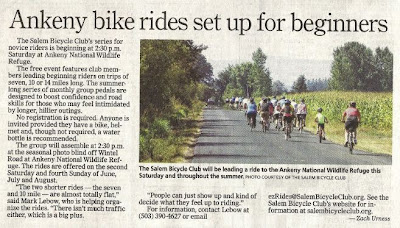 From the SBC calendar:


This ride is a slow-paced ride on low-traffic roads for novice cyclists. The ride starts at the seasonal wildlife viewing blind on Wintel Rd, 0.1 mile west of the Marlatt Rd intersection.

That notice was in yesterday's paper, and above the fold in the same section was a nice feature on biking at Silver Falls. The SJ's really picked up its coverage of recreational bicycling, which is great to see. 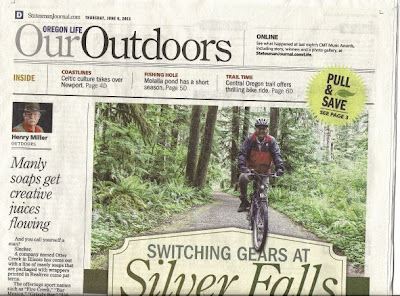