Declare Your Independence! Go Gas Free. It's a Patriotic Thing

Last week the President announced his initiative on carbon pollution:


Many Americans who already feel the effects of climate change don’t have time to deny it — they’re busy dealing with it. Firefighters are braving longer wildfire seasons. Farmers are seeing crops wilt one year, and wash away the next. Western families are worried about water that’s drying up. And while we know no single weather event is caused solely by climate change, we also know that in an increasingly warmer world, all weather events are affected by it.

The costs of inaction can be measured in lost lives and livelihoods, lost homes and businesses, higher food costs and insurance premiums, and hundreds of billions of dollars in emergency services and disaster relief. So the question is not whether we need to act, but whether we will have the courage to act before it’s too late. And how we answer will have a profound impact on the world we leave to our children, and to future generations.

This plan will cut the dangerous carbon pollution that contributes to climate change. For years, groups like the American Lung Association have warned us that carbon pollution threatens our health and the air our children breathe. We limit the mercury, sulfur, and arsenic in our air and water, but today, there are no federal limits on the amount of carbon pollution that power plants can pump into the air. That’s not safe. So we’ll work with states and businesses to set new standards that put an end to this limitless dumping of carbon. 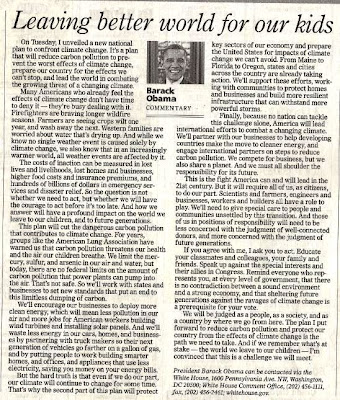 It doesn't just have to be the power plants.  Transportation also creates a lot of carbon pollution.

Here's an easy way to whack as much as 20% of fuel costs and reduce emissions: Make a commitment to Fuel-Free Fridays. Make the commute and errands by bike or on foot.


Or pick a different day of the week to go gas-free. 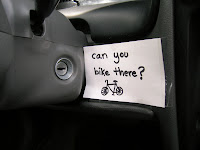 Or tape a reminder next to your car ignition, and ask yourself whether you really need the car for each trip.

Folks don't have to go whole-hog with bike transportation. But if they can make enough of the short trips by bike - well, maybe they'll think about ditching the second car. Think of the savings!  It's the patriotic thing to do.

This writer certainly has.

It's got other benefits, too. The more we bike, the harder it will be to push for the "So-Lame Alternative" bridge and highway whose finances will yield closed libraries, lousy schools, a crippled bus system, fire stations closed and police stuck in a seismic house-of-cards.

So go gas free!
Posted by Salem Breakfast on Bikes at 9:30 AM