The annual conference of the Association for Gravestone Studies happens rarely out here on the west Coast.  Portland and San Francisco have hosted in years when the conferences were split into west and east coast editions.  But that's it.  New England, as you might expect, seems to dominate.  So for Salem to host the event this year, in a year without a split, is kindof a big deal.  It's worth paying some attention.

And it turns out there will be some interesting talks between today and Sunday.


On Wednesday night the 19th, John E. Eck and Amy Stutzenberger, University of Cincinnati, School of Criminal Justice will present a talk titled, "A Crime Scene Approach to Preventing Theft and Vandalism in Cemeteries."

As for vandalism, it would be so very interesting to learn what Eck and Stutzenberger might have to say about encouraging or disouraging walking and biking traffic in cemeteries!  What are considered best practices these days?

And on Saturday, there will be an official tour of Salem Pioneer Cemetery.  Conference attendees can see for themselves the costs and benefits of the chain-link fence with a single point of entry.  (It is interesting to note in the nomination to the National Register for the cemetery, this chain-link fence is explicitly called out as  a late and non-original addition - in the lingo, a feature "non-contributing" to its historic character.)

It remains an interesting irony from this vantage point that dogs and heavy cars are ok, but we don't want to encourage more eyes and ears on the cemetery from people walking and biking.  Indeed, in the nomination the cemetery is said to provide


south Salem with green open space of 52 acres which attracts passive recreational use by strollers and dog-walkers much as, in the East, the early rural cemeteries attracted leisure outings and helped give rise to the movement for urban parks.

How this is incompatible with walking and biking connections is something that remains murky! 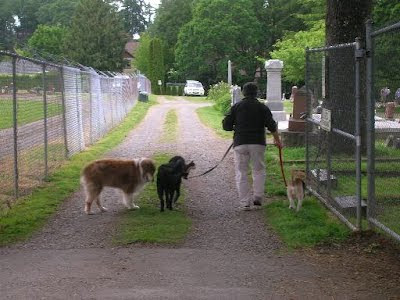 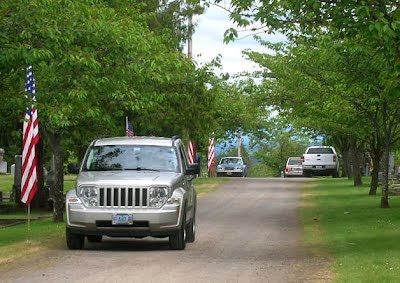 A talk on Friday night the 21st will be about community mausoleums. In "A New and Useful Burial Crypt: The American Community Mausoleum" Mark Nonestied, Director of Exhibits and Programs for an historic site in central New Jersey will talk about "the development of the community mausoleum from its beginnings in Ohio in 1907 to its proliferation throughout the country in less than two decades. It examines the architectural design of these structures, public reaction to them, and some modern preservation issues." This is especially relevant with the Mount Crest Abbey Mausoleum of 1913 (just to the west of the cemetery) that is facing some of its own preservation issues.

Other lectures range on topics from shipwreck cemeteries, Puritan texts, headstone iconography, to things like the economic networks in and around the funeral and burial businesses.

The full list of lectures and times is here.  According to a note in the paper,


the evening lectures Wednesday through Saturday will be open to the public and free of charge at Cone Chapel in Waller Hall on the Willamette campus.

Email ThisBlogThis!Share to TwitterShare to FacebookShare to Pinterest
Labels: Pioneer Cemetery and Alley