Vintage Roadway Ephemera: With Median, Hood and Fairgrounds may Change 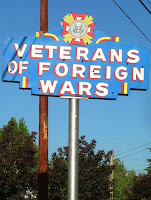 Just a block away from Broadway Commons and the new development along north Broadway, the five-legged intersection of Hood and Fairgrounds is a little bit of the land that time forgot.

It's a remainder of the Hollywood district and mid-century commercial development patterns.

Additionally, the VFW hall speaks of "the greatest generation" and its dwindling numbers.  The post was established in 1931 at this location.

Everything is vintage. Even the traffic control. 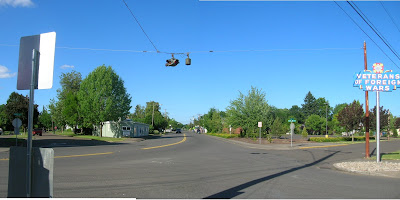 Hung on a line between two rusting poles and a telephone pole, a four-way flashing light makes you think Route 66 more than the Interstate. The way Fairgrounds Road turns into Portland Road is a clue it was part of the old highway system, an early alignment for Highway 99.  In 1931 it was at the center of things!  Yup, it's old-school.

On Monday Council approved funding a median and some other changes here, and the intersection's going to be changing.  Mostly it will be for the best, but some things may get lost, too.  Notwithstanding the speeding problems, when traffic is light, the intersection is charming and seems full of possibility.  You can imagine it being a hub of activity. 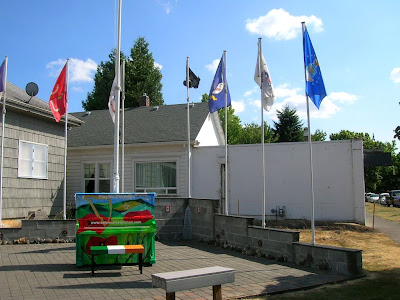 Do you remember the street piano project from last summer? One of them was here, at the VFW hall and memorial wall.

The old-school commercial buildings, the empty parking lot, and everything else stoke the imagination, and I wonder if it could be redeveloped in an interesting way, retaining most or all of the buildings.  (The new Salem Cinema replaced the Eagles Lodge, from approximately the same vintage.)

Do you have any memories or images of this intersection?  What would you like to see here?

The farmer's market has started on Thursday nights, so on your way, check out what soon may be some vintage ephemera.
Posted by Salem Breakfast on Bikes at 6:00 PM

Email ThisBlogThis!Share to TwitterShare to FacebookShare to Pinterest
Labels: Other Bike Fun, Veterans