The bike corral for First Wednesday looked like a fine success.

13 bikes at this moment, and people just came and went. One person was taking a time-lapse all afternoon and evening, so I'm sure there will be even more dynamic documentation of the ebb and flow!  Over the course of a day, it doubtless served a whole lot more people than two car stalls would have. (See end for video!)

Both City Manager Linda Norris and Downtown Revitalization Manager Sheri Wahrgren walked by discretely, counting no doubt out the corner of their eyes.  It is rumored the City may have interest in piloting an officially sanctioned corral this summer, so the bikes and lively sidewalk cafe scene was hopefully confirmation that bike mean business.

On the vacant lot at State and Commercial, right next door to Scott's Cycle, Gallagher Fitness hosted the "Brooks Run Happy Cavalcade of Curiosities." With the old-timey-carnival-sideshow thing, it seemed more than a little like the Tour de Fat. With On Your Feet Fridays, the running tribe is really doing a good job of creating community happenings!


Down the road, construction on the path connection at Miller Street and River Road was almost complete.

The new path has room for two-way traffic. (Though of course it still transitions to the execrable sidepath all rutted and rooted.) 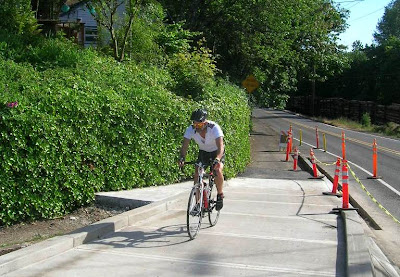 The entry is also pushed out well past the hedge, so sightlines are much better. 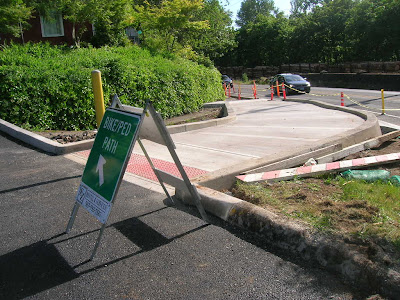 And there's bigger construction.  Interested in the new bridge over Commercial? Those 180-foot beams for which they were shutting down the street and with police escort conducting trucks the wrong way for the final stretch?

There's a little tiny dude for scale. They're big.  Under them, you can also see the old square piers, tops whacked off, at regular intervals in the water, so the continuous span of the new beams is a significant change in design.  (Compare vintage 1927 drawings here.)

That maple visible in the upper right?  It's kinda in the way, but the City and contractors are going to some lengths to protect and retain it.  It is a good example of the ways the City isn't always wantonly cutting down trees, fortunately.

updated with photo of construction at Miller all finished