File away in things that make you go "hmm..."


It seems almost certain to add pressure for a third bridge at the end of the parkway.

Lest this seem like all bad news, the City has identified the O'Brien parcels for redevelopment with medium or higher density housing and mixed-uses. That's a good thing! See three Sustainable Cities Initiatives student proposals here.

Salem Weekly continues its terrific series of brief profiles of people impacted by the proposed giant bridge and highway. 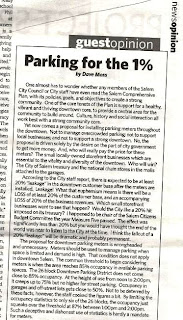 
One almost has to wonder whether any members of the Salem City Council or City staff have even read the Salem Comprehensive Plan, with its policies, goals, and objectives to create a strong community. One of the core tenets of the Plan is support for a healthy, vibrant and thriving downtown core, to provide a central area for the community to build around. Culture, history and social interaction all work best with a strong community core.

So here's an imaginary response by the Comprehensive Plan:


Someone wants to dance with me! Thank you! My friends call me "Comp" but sometimes I feel more like Cassandra than Comp, if you know what I mean. Anyway, I feel like a wallflower mostly. Oh, people sometimes talk about me, but they never talk to me, and they rarely ask me what I really think. Mostly they just put words in my mouth, you know, just talk right over me.

So here's something maybe relevant that I have said. I know it's all fancy and bureacratickal, but that's the only thing them planners and councilors understand, I guess.


12. The implementation of transportation system and demand management measures, enhanced transit service, and provision for bicycle and pedestrian facilities shall be pursued as a first choice for accommodating travel demand and relieving congestion in a travel corridor, before widening projects are constructed.
13. The Salem Transportation System Plan shall identify methods that citizens can use to commute to work and decrease overall traffic demand on the transportation system. Such methods include transit ridership, telecommuting, carpooling, vanpooling, flexible work schedules, walking, and bicycling.
18. The Salem Transportation System Plan shall identify methods that employers can use to better facilitate the commute of their employees, encourage employees to use alternative travel modes other than the SOV, and decrease their needs for off-street parking.

Some people thought it was crazy to want a connection through a city-owned cemetery and park for a walking and biking path, but I know that if people just asked me what I thought, they'd see that increasing walking and biking connections is one of my goals! But that's just crazy talk, they say. What can you do?

And then there's that bridge foolishness. I clearly said "before widening projects are constructed" there's a bunch of other stuff you gotta try first. See that number 12? Folks, they're just not listening to me. I just want to yell and throw the crockery! Like I said, they just put words in my mouth - and ignore what I really said. Then all you can do is pitch a fit.

Anyways, I'm not sure I've talked all that much about parking. Probably if ya'll wanted to reduce driving and increase walking, maybe being a little more stingy with free parking would be the right thing to do. But that's just my opinion. I know some people avoid downtown because the car traffic down there is so dang annoying. A person don't feel safe in the street, cars just rushing everywhere like they own the road or something.

And if you're concerned about the 99%, a lot of them can't even afford cars, or have lost a home, so maybe increasing ways to get around without cars would be fairer than worrying about some silly parking meter fee. I mean, if you can afford $4 a gallon gas and insurance and everything else, what's the use of complaining about a buck or two for a parking spot? That seems all mean and cheap.

Oh, I know I get to talking - it just all comes rushing out when you ask me to dance. Will you still want to dance? Please?

On the parking structures it stuck me that the latest injection of money into the Downtown Parking District from Urban Renewal was just over $1.2 mil. So while we quibble over the accuracy of the $100k per month spending on the bridge, we are spending more than $100k per month on the parking structures. That seems to be a story that our so-called "alternative weekly" should be covering.