Dribs and Drabs in the Neighborhood Associations and the News

Several neighborhood associations meet this week, but many are having annual meetings and picnics with light agendas. Predictably enough, the farther you get from areas directly affected by the proposed giant bridge and highway, the less often it appears on the meeting agenda. Perhaps not coincidentally, the City is much more zealous about outreach on the proposed streetlight fee than on the giant bridge and highway.

This week's agenda doesn't have anything new transportation-related, but the minutes from the previous meeting do make an interesting point about the allocation and timeline of urban renewal dollars:


Courtney Knox-Busch...presented update on renewal area...on the Way-Finding Project (4 new welcome centers, 18 wayfaring [think that's supposed to be wayfinding] signs, and Edgewater Blades), Toolbox Projects Gateway Area Strategic Plan to develop concepts for the West Salem Gateway Area, including hotel/market study, traffic impact, analysis and assessment study, and bicycle/pedestrian accessibility. Funding has been drained by the Second Street Project but it is anticipated by 2018, there will be money available for seeking these studies. [italics added] 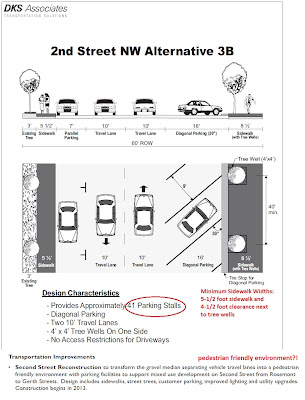 The insatiable appetitite for free on-street parking in an area that is nowhere close to 85% utilization of existing on-street stalls has pushed out other projects until 2018.  The Parking Consultant notes that "Currently, the on-street supply is occupied at a very low level (35 percent in the peak hour)."

At the Grant neighborhood's annual meeting, Director of Public Works Peter Fernandez, City Traffic Engineer Kevin Hottmann will talk more about the proposed barrier on Hood and Fairgrounds where speeding drivers fail to navigate the turn and crash into the church and school building. (See here and here for more)

Minutes from the May meeting also contain additional information about the Downtown Mobility Study:


Cara reported that the final meeting will be June 6th, 9:30 am-Noon. Computer generated models of the proposed traffic pattern changes will be presented. An open house with the same information will be held on June 12th from 4:00-6:00 pm in the Anderson Room of the Salem Public Library.

There will be several years of lag time before many of the recommendations can be implemented. The grants that financed the recent curb extensions in downtown mandate that the work cannot be disturbed for 10 years. Changes that do not affect the new construction, such as revising paint, can be made. One significant proposal is to eliminate the double turn lanes which are hazardous for pedestrians.

The fact that the curb extensions can't be touched for 10 years was news to me.  That's another reason to be more cautious with them. 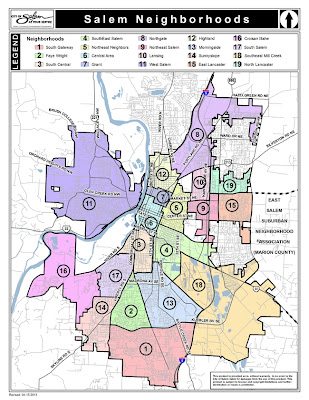 Other Bits in the News

In any event, one of the ongoing ironies in Salem is that we talk about this a lot, but practically every time we have a chance to enact a policy or create a culture or start a project that would retain and attract young people, we pretty much repudiate it!

Young people are driving less and want more alternatives to driving a car!  So let's get after it!  The more you advocate for a giant, expensive bridge and highway, the fewer resources there are for other stuff that might actually attract and retain bright "home grown talent."

The Third Bridge is an $800 million talent repellent.  Just sayin.

The compression required by the paper is always disappointing. There's so much more to say about the bridges! But it was good to see a piece about some of the history.
Posted by Salem Breakfast on Bikes at 7:00 AM