At Council for Monday, projects proposed for the bond measure surplus are a mixed bag.  Bike and Walk Salem doesn't seem to be motivating any of them, with economic development, neighborhood safety, and the  giant sucking sound of Keubler instead driving things.

The failure of Bike and Walk Salem to have a major influence on the selection outcomes adds to the evidence that it may be destined to look nice on a shelf, gathering dust, rather than become a dynamic force for change in the city.  There's another two studies proposed, but the City seems comfortable with a certain amount of study churn, the cycle of soliciting grants, finishing the studies, and moving on to the next.  It would be so nice if the City, you know, funded and enacted some study findings before moving on to the next shiny thing.

Because of the crappy economy, City staff estimate that there will be "$11 to $13 million in Bond savings" from the $100 million "Keep Salem Moving" road bond of 2008.  With these savings,

To hell with Commercial and Kuebler!  Why are we making these giant intersections even bigger?  We could have funded some of the Bike and Walk Salem recommendations.  Changes on Broadway and Hood will be helpful, but that's the smallest project. I have a much easier time with the 25th and Madrona bit, as previously noted (and here), but it's too bad more can't be done for people on foot and on bike on 25th. 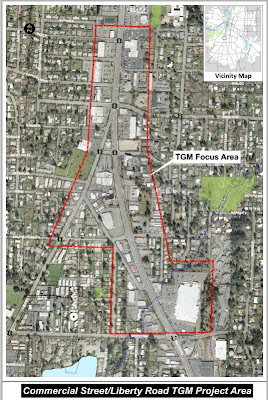 The City looks to apply for two Transportation and Growth Management grants, one for a study and refinement plan on south Commercial Street between Madrona and Ohmart for a complete street with facilities both along and across for people on foot and on bike.  (The corridor was also designated a critical ADA corridor in Bike and Walk Salem.)


This commercial district developed at a time when little thought was given to non-auto travel. Much of the area consists of commercial properties with a mix of parcel sizes, numerous driveways, and few connections between the public realm and shop entrances. This lack of an inviting, attractive circulation system can be a limiting factor for reinvestment. Although this area is experiencing a moderate resurgence of development activity, several parcels such as the old Safeway store remain vacant or underutilized.

The other is for a citywide study of arterials and collectors.  Reading the description I think of the old "Garden Road," now known as Market Street, and Silverton Road:


Many of Salem's arterial and collector streets were originally developed as farm-to-market roads. The city grew up around these roadways that are now the backbone of the city's transportation network. Many of these roads are not constructed to the City's Street Cross-Section Standards.

The applications look like fine ideas, but without movement on other fronts you have to wonder just how committed to implementation the City actually is.

There's an update on the downtown Economic Improvement District assessments and well as a more general update on the City's activities as a successor to the Downtown Partnership after the City terminated the EID agreement.  The First Wednesday theme for August will be "bikes" and it will be so very interesting to see how the City embraces bicycling downtown in meaningful or superficial ways.

There's also an update on the North Downtown Housing Investment Strategy, which includes as one goal to "Focus infrastructure investments on those that enhance pedestrian and bicycle flow, comfort and enjoyment, and support adaptive reuse of existing buildings (Liberty/Broadway)."  I like very much the use of "comfort and enjoyment"!  (But moving past shiny rhetoric is always the thing.)

As noted for the Downtown Advisory Board meeting, the Marquis nursing home ("post-acute care rehabilitation facility" is nearly meaningless to the general public!) is applying for a property tax abatement, and City staff are recommending against it. The incentive program is meant for housing "not...designed or used as transient accommodations, including but not limited to hotels and motels." The applicant says that "85% of the guests would be short term users of less than thirty days." It should be an open-and-closed case, a rare slam-dunk for the City. (Of course you have to ask - why is it even on the Council agenda?) 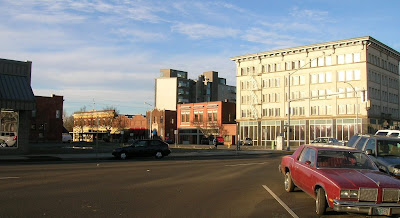 You may have seen the headline in today's paper about the corner of Commercial and State, the gravel lot and former McMahan's site (and before that the Griswold block).  Council will deliberate whether to designate the two tax lots "key properties" in the urban renewal district, and whether then to purchase the smaller lot at 129 Commercial, the former Les Newman's, a thin strip immediately adjoining Scott's Cycle, so that it can be developed at the same time as the larger, corner parcel at 260 Commercial.  You may recall that the owners of 129 Commercial had objections to the bank proposal, the City notes that


Over the last seven years four projects have been proposed for the 260 State Street site that included an interest in purchasing the adjacent property at 129 Commercial Street SE in order to enhance the type of uses, building design, and on-site parking. All attempts to date for common ownership of both sites have been unsuccessful resulting in a barrier to redevelopment of a key location within the downtown core.

The City proposes approval for the Hospital to issue $70 million on bonds.  The paper last month noted a request for $20 million:
It was interesting to see here the funding plan first - quite the reverse order of the Third Bridge.  Also interesting is tentative plans for a new rehab center on the Blind School property and $3 million for a parking garage.  (If the hospital metered parking, maybe it wouldn't need to spend so much on "free" parking!)  And interesting is the creep from $20 to $70 million!

And some stuff on airport leases (and likely boondoggles!) - here and here.
Posted by Salem Breakfast on Bikes at 12:30 PM

Comments on the SJ story are interesting -
http://www.statesmanjournal.com/comments/article/20130608/NEWS/306080016/City-may-buy-McMahan-s-site

The story seems to misunderstand the prospective purchase: One lot only, and the smaller lot.

It would be interesting to see a frank acknowledgement by the City of how much of an overpay the $207,500 purchase price is. If it is a $50,000 overpay, say, how long will it take the City to recoup that in property taxes once the City turns around and sells the property and it is developed. Maybe with a rebounding market they would recoup it directly on a property sale. Since they also cannot speak directly to difficulties the seller might have posed in previous attempted transactions, there is much here we don't know.

From two separate SJ stories today, one before the meeting, the other after -

1) “We are taking a broader, more flexible interpretation because, frankly, we want to see things get built downtown,” said Mark Shipman, a Salem lawyer who represents the owners of the Boise site. The project “doesn’t pencil” for the developers without the tax break, he said....

The Downtown Advisory Board has unanimously recommended the city provide the tax incentive to the Marquis project, said Jennifer Martin, a member of the board and a local real estate agent.

2) city staff and a number of councilors expressed strong reservations that the project, Marquis Post-Acute Rehabilitation Center, does not qualify for housing tax credits.
In fact, some note, allowing those credits would be plain illegal.
“This is clearly illegal,” Councilor Laura Tesler said. “We are trying to follow the law and not just consider the law an inconvenience.”...

Councilor Chuck Bennett urged the representatives to take a closer look at other, more appropriate and applicable incentives that could boost the project.
He emphasized that the city wants to do everything it legally can to keep the project moving forward. The issue is tabled to a later meeting in part with hopes that city staff can work with the developer to discover other incentive programs.
“We need to have the developer come to the table and give up the housing (incentive approach), Bennett said. “Let’s get serious now so we can get this built. This is a great development.”