It's hard to say whether this weather will hold up for the weekend, but if it does, consider our great Wine Country Thanksgiving.

Most wineries are open and there's no better way to visit than by bike! - And few better ways to work off those calories.

The south end of the Eola Hills are picturesque and offer a good number of wineries. 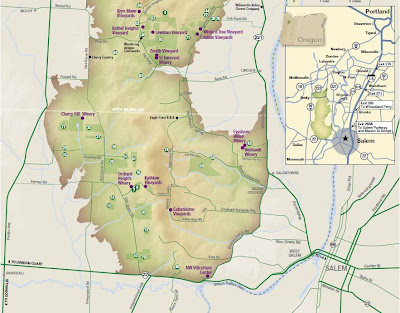 There's also a bunch of wineries in the Waldo Hills and out south towards Ankeny. For a short-hop, Honeywood and Willamette Valley Vineyards are probably the closest to downtown Salem.

(Most of the wineries do have a tasting fee, but often refund it with a wine purchase.) 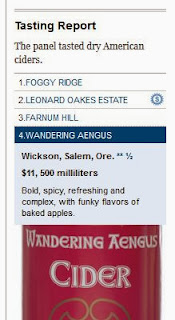 Oregon also has a young cider industry, in many ways more authentically "early American" than wine, and one of the stars, Wandering Aengus, just got a nice notice in the New York Times.

One of their ciders was the #4 choice in a recent tasting report, "Dry Cider, an American Favorite, Rebounds."

Wandering Aengus is located in town, in the Fairview Industrial Park, and have in the past offered a discount for bicycling in.

(They're updating the website - "Please excuse non-functional links, error messages, and grammatical inaccuracies. They will all be fixed in due time." - so probably best to call beforehand to make sure they're open.)

EZ Orchards also makes cider, and both EZ Orchards and Wandering Aengus also had nice pieces on the Beervana blog.

Finally, Santiam Brewing is opening The Bureau, a tasting room-slash-bar, in the Reed Opera House, and they're naming it after one of the old saloons in the Reed.  In fact, they're going to be in the exact same space.  Nicely turned!

The local brewers should have a direct taproom presence downtown, so this will be a welcome addition to Ventis, Browns, Franklins, as well as Salem Ale Works and Gilgamesh and the others.

It's pretty great that right here, there's a full range of home-grown and festive beverages for the holiday table!  Even if a visit to a tasting room isn't in order for the weekend, at area stores there are lots of great local options for Thursday's feast itself.
Posted by Salem Breakfast on Bikes at 9:00 AM

Email ThisBlogThis!Share to TwitterShare to FacebookShare to Pinterest
Labels: Other Bike Fun, Wine

One of the nicer rides I did last summer was out to the Rogue hopyard in Independence.

One of the more encouraging developments in Salem recently are the number of small breweries and tap houses that have sprung up. Many host regular food carts and seem like they could have potential to become lively gathering places. The more disappointing part about these places are that they are all located in garbage strip developments on stroads. They also don't serve food, and therefore, minors are not allowed so we can't go to any of them as a family. Portland doesn't seem to have these such hang ups. There are plenty of places where young families and singles can enjoy lively places together.

Second! Wigrich and American Bottom is a great ride! It's great to see the breweries increasingly champion the contributions of the hopyards and work more closely with them.

I keep thinking that NE Madison has the right blend of an industrial area bordering on a still-gridded neighborhood for a lively gathering place - anchored perhaps by the Roller Derby. Doesn't that seem like the right mix? How about Howard Hall or the laundry on Gaines and Broadway. Anyway, as the beer scene continues to mature, hopefully it will grow into more hospitable locations and offer more family-friendly options.

I've always thought this place would make an awesome pub or brewery. http://tinyurl.com/meflyml

Lee: I have been watching that place too. I even pitched it to the board of the Salem Coop. Its interesting that most of the newer infill buildings in the Portland streetcar districts are modeled after old service stations. If it can happen in Independence it should be able to happen here: https://www.facebook.com/MecanicoPub

I agree Howard Hall would be a great candidate too.

This gets to the point I have tried to make about "good enough urbanism". Salem has lots of potential for this kind of stuff that doesn't require sugar daddy developers or leadership from the city. The biggest obstacle could be the neighborhood associations.

Which reminds me - the shop next to the Union St. RR Bridge has also seemed like a prime candidate for this sort of thing.

RE: Service Stations. I think the soon-to-open Acme Cafe was one. I wonder how many are left on minor arterials and collector streets - the smaller streets.

As for the NAs, it will be interesting to see how they weigh in on the North State Hospital Campus. Will they allow commerce and density? Or insist on single-family housing.

The 12th and 13th Street area has a lot of potential for some adaptive reuse too.

Mecanico looks cooler than anything we have in Salem.

Councilor Dickey says via twitter that she's going to do something for food carts/trucks at Council on December 9th. So look for more and stay tuned on that issue...

RE 12th/13th - I have been hoping the Fitts/Santiam Wine/Drunken Cook convergence would jumpstart things in that neighborhood, but it doesn't seem to have happened quite yet. As you say, that's an area with potential, too!

The Bureau closed a little over a month ago sadly.