Thursday night the 21st, the Historic Landmarks Commission will hear about new street standards proposed by the City.

Staff say the presentation will include a discussion of "Sidewalk width & scoring patterns; Pedestrian bulb outs at corners; Tree wells & grates; and lighting both pedestrian level and street level." Another set of details will be discussed in one or more subsequent presentations.

In the context of the HLC, modern standards must stress compatibility rather than authenticity in historic districts, so it's of limited usefulness to see "what used to be" as if that might guide us on appropriate development and standards.  The move from mud to pavement, and from boardwalk to concrete sidewalk, is progress obviously, and we'd almost never want historical accuracy on these.

In fact, "mud" was often code for a rank slurry of poop and sticky rain-moistened dirt!  When the State Highway Commission's motto was "Get Oregon out of the Mud," read accordingly - and savor the progress.  (I think we have too much pavement, of course, but I do not mind at all that modern pavement is a standard road surface!)

In other areas things are less clear. Preservationists go to great lengths to check the scourge of vinyl and aluminum windows, and yet have much less to say about car traffic and parking management.  For both 19th century and even streetcar-era development, cars are the intrusion and disruption!  Go figure.

Anyway, here's a couple of sidewalk scenes, then and now.

In the first pair, most things have changed and the only thing really visible in both pictures is the steeple.  I love that there was covered bike parking, however.

The laundry was in a curious part of town, and the somewhat naughty sense of humor in this ad seems to hint at it.  According to wikipedia, the "stool of repentance" was "an elevated seat in a church used for the public penance of persons who had offended against the morality of the time, often through fornication and adultery."  Maybe this isn't exactly how to read the ad, but its rhetoric in other ways is also suggestive.  The alley between Liberty and High was also an axis for Salem's small Chinatown, and the low-ground was related to "Peppermint Flat," the center of bawdy house trade. This was a somewhat disreputable part of town. It is possible, too, that the laundry depended on cheap labor provided by immigrants or unmarried young women with all the bikes. And what of Col. Olmsted, who certainly sounds like a character?

Even now with the dirty laundry / clean laundry transformation, the jokes practically write themselves. (Or perhaps you have other ideas on how to interpret the ad?)

Much more of old Salem remains in the next pair of photos!

This one is great because the Semler building is the same as the Wait building, the bank is mostly the same (but longer), the JK Gill and Adolph blocks remain, the steeple is visible in both.  The essential scale and fabric - the urban bones - remain here, even if the details like windows and cornice ornament are altered, and there are a few new buildings, including the Livesley tower - which is a little oversized, it must be said.

But the street trees and awnings don't seem so different.

Without cars, people were free to stand in the road.  And of course Salem was smaller and denser, and so more people congregated downtown. That's a real loss in vitality.

The horse fair image is quite detailed and you can zoom in on it at the library's site.  What strikes you most about the then-and-now pairs?

Back to the street standards, it turns out, unsurprisingly, that the City has an administrative rule-making process - and it's interesting that in following the TSP for some time, this has never come up before.  So this is something new here!

Unfortunately there's no staff report or other materials, so it's not possible to comment directly on the substantive matters. The process requires materials be posted 15 days in advance on the City website, and there is nothing posted, so at the moment this looks like preliminary conversation and prep work.

The Commission meets at 5:30pm in Council Chambers on Thursday, the 21st.

So what about the first Methodist Episcopal Church? Was it moved and did the laundry use the same building?

It is not possible just yet to say with certainty, but the case looks pretty good!  Helpful information from Elisabeth Potter and Jim Scheppke, as well as a trip to the library this evening, turned up much.

Compare this old drawing, reproduced in The First United Methodist Church of Salem, Oregon by Orin and Mary Oliphant.  Looks like the suspect, now, doesn't it!

(The image is possibly a copy of one published in 1858 as part of Kuchel & Dresel's Pacific Views.  A copy or set of Pacific Views might be held in the UO and OSU libraries, but it doesn't seem to be in any collections in Salem. The University of Oregon has several contemporary images of Portland buildings online, and the style here is consistent with those.  The Oliphants footnoted much, but I couldn't find any illustration credits!)

The Oliphants write that this first church was on the site of the brick church we know today and, in preparation for the larger brick church, was moved in 1870 across the street to the southwest corner of Church and State.

Needing money for the big brick church, the Oliphants say,

And it seems likely that one or more members of this consortium then again moved the church to the Liberty Street site.  But this either wasn't interesting or knowable to the Oliphants, and we don't know when or why a second move happened.  By 1884 the old church building is possibly there on Liberty.

We can definitely say that in 1888 the church was no longer on the corner, and two houses seem to have been built on the corner lot.

(So that means the church was on that corner for 18 years at most - which seems more than the "where it remained for many years, first serving as an interim church, then filling various secular uses" in the National Register listing. I think that info about this second move has been lost down the rabbit hole!)

In the 1888 Sanborn the building on Liberty is an agricultural implements warehouse, but in the 1890 Sanborn the building is named a laundry for the first time.  Some newspaper accounts also begin to attach the name of Col. Olmsted to a steam laundry in 1890, so perhaps this is when he started the business there.

Chasing down the details on the second move is outside our scope here - but if readers know more, please share!

In the meantime, thanks to Jim and Elisabeth!

The SJ published a note today. It adds the Olmstead started the business in 1889, but does not add many new details. 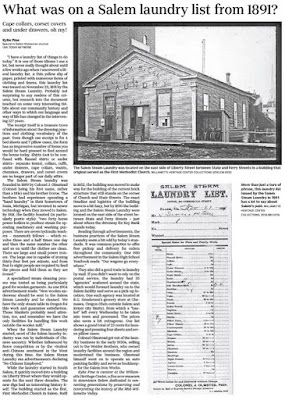 What a wonderful post and pix, SBOB! Thanks so much.

The most interesting thing to me about the Oregon Steam Laundry is that it is the original First Methodist Church building, built in 1852. I believe it was moved to this site to be the laundry. Such a shame it was not preserved — a very historic building. It probably burned down at some point.

Also, how about those spectacles over the street in the other picture. Kind of dadaesque!

But there is conflicting evidence on the laundry as an early church building, so I didn't mention it since it didn't seem that it was a settled matter.

If you can point to some primary source, documentary evidence that would be a great help! Otherwise it has seemed to depend on scattered he-said, she-said notes compiled no earlier than the mid-20th century.

This is a totally classic bump in the road chasing down a detail in Salem history!

There's this juicy note. The library's photo caption on the laundry says, "The building was formerly Salem's First Methodist Church, built in 1852 and dedicated by Alvan F. Waller in 1853." So it's not like this claim is even that obscure. But you start looking things up, and the details just don't quite come together.

For example, the National Register listing (from 1983) on the 1878 brick church says, "When the site was cleared and prepared for new construction in 1870, the old church was moved to a lot acquired on the block to the west, where it remained for many years, first serving as an interim church, then filling various secular uses....while the church suffered through financial difficulty and lengthy lapses in construction [of the brick church], the old church which had been moved across the street to the west was used by the congregation."

Here's the problem: The laundry on Liberty is two blocks west of the brick church, not one block west or just across the street. Plus the NR citation doesn't mention the laundry specifically. So do the details check out? Not quite.

The laundry building sure looks like something from the 1850s, all Greek Revival-ish. It's totally plausible, maybe likely, but I worry that someone has made an assumption in identifying the laundry with the earlier church building and that the assumption is now getting reproduced. Until I can find a more secure citation, I wasn't going to run with it.

Sorry for the brevity on the first reply.

So here's a mystery! Does anyone know the answer?

Added clip from the SJ today.