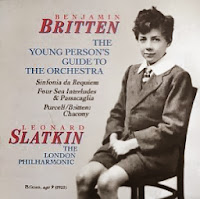 Benjamin Britten was one of Britain's greatest composers and his 100th birthday is being celebrated this month on the 22nd.

Last weekend his children's opera Noye's Fludde was performed, and this weekend one of his String Quartets will be played at the Library.

More interesting for a bike blog, he composed a bike song! Having been born in 1913, he came of age at a time and place when bicycling was important transportation, and it is not surprising he composed something when he was in his later teens.

The song, "Going down Hill on a Bicycle" is dedicated to a fellow composition student, Remo Lauricella, who was about a year older than Britten. It is paired with a piece titled "The Moon" and together they perhaps suggest nighttime adventures. It's easy to imagine adventures by train and by bike in Britain of the 1920s and 30s!

"Bicycle" nods to Henry Charles Beeching's poem of the same title (published in book in 1895, though it might have appeared earlier by itself).  In the early 20th century, the poem seems to have been anthologized fairly often, so maybe it was a favorite poem, too, for Britten:


WITH lifted feet, hands still,
I am poised, and down the hill
Dart, with heedful mind;
The air goes by in a wind.

Swifter and yet more swift,
Till the heart with a mighty lift
Makes the lungs laugh, the throat cry:--
'O bird, see; see, bird, I fly.

'Is this, is this your joy?
O bird, then I, though a boy
For a golden moment share
Your feathery life in air!'

Say, heart, is there aught like this
In a world that is full of bliss?
'Tis more than skating, bound
Steel-shod to the level ground.

Speed slackens now, I float
Awhile in my airy boat;
Till, when the wheels scarce crawl,
My feet to the treadles fall.

Alas, that the longest hill
Must end in a vale; but still,
Who climbs with toil, wheresoe'er,
Shall find wings waiting there.

The association of bikes and birds was a common trope on both sides of the Atlantic, and you can see it in the winged wheel logos for the League of American Wheelmen and the British Cyclists Touring Club.  So while it's not likely there's any great originality in the poem's imagery, the imagery was widespread and the poem did seem to be popular.

The song "Bicycle" is a student work, not formally included in Britten's adult list of compositions, and there don't seem to be any full recordings online or for sale. So it's pretty clearly a curiosity more than a fully formed work of art.  You can listen to a clip - possibly a student recording - of the first 39 seconds here.

About the Camerata Musica concert with the String Quartet...


On November 10 we welcome back the Arnica String Quartet for our last concert this fall. They have given us several excellent concerts, starting in November 2006, since their founding in 2005. They have performed on concert series at Portland's Old Church, Pacific University, Oregon Health Sciences University, Camerata Northwest, as well as Camerata Musica. The musicians are Shin-young Kwon and Fumino Ando, violins; Charles Noble, viola; and Heather Blackburn, cello. The two violinists alternate playing first violin.

The concert will be Sunday afternoon, November 10, at 2:30 p.m., in Loucks Auditorium of the Salem Public Library. As usual, admission is free.

The program includes the third string quartet of Benjamin Britten and the monumental Schubert Quartet in G Major. The Quartet is concentrating on Benjamin Britten’s quartets this year, and in March they will play all three of his quartets in a concert at the Community Music Center in Portland..

If you're more curious about Britten, a couple of months ago Slate put together an introductory playlist on spotify.  Fans of Wes Anderson's Moonrise Kingdom will have heard a good bit of Britten in it. The google will turn up much, much more.
Posted by Salem Breakfast on Bikes at 7:00 AM