Vintage Mysteries of the Electro-Matic

Remember when it was sunny and beautiful??? 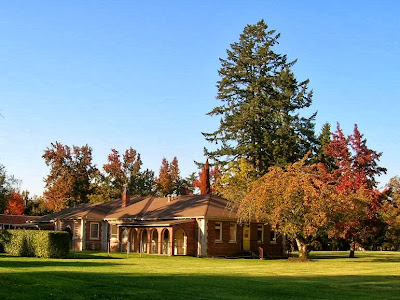 Just a block down the street from Howard Hall and the Blind School property is an old, locked cabinet. 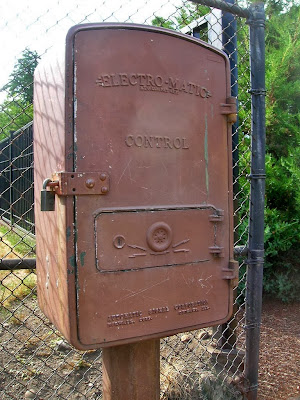 What do you suppose is this artifact from another era?

Why it's a vintage "Electro-Matic" control box of course!

(Love the mini-zaps emanating from the wheel running over the trigger pad.)

The box is at the northeast corner of the entry to McCulloch Stadium at Bush Park.  But why?  What did it do precisely?

As you can see from this 1949 photograph, people used to drive cars along what is now the footpath system.

McCulloch Stadium was built the following year, in 1950.

A few years after the 1949 photo, here's another view from the Willamette archives (looking in the opposite direction), also with cars in the park area:

I was stumped and failed with the google.  After some inquiries, a helpful reader with better google-fu found a hint in another blog!  About a box similar to the one in Bush Park, a blogger in New York writes:


They were rather frequent during the 1960s and 1970s, but I see very few these days. I believe it was a traffic counting device, though I could be wrong. The control box says “Electro-Matic Traffic control Automatic Signal Division.” There seem to be several Electro-Matic companies these days, though none based in Norwalk, CT.


[Commenter]: I remember my Dad telling me about these devices: more than just “counting devices”, they were used on streets that only occasionally fed cars onto a major, busy thoroughfare.
They were some sort of electronic eye, that would sense when a car had approached the intersection, something akin to the “pressure bars” buried under the asphalt today that perform the same function.

The traffic light on the main road would either stay green or stay green longer than normal until the electronic eye sensed movement (a car approaching the corner). The device would then alert the signal box, which would change the light to allow the car to enter or cross the main intersection. That probably explains why the arm is so long, as it had to reach out over the street to sense the approach or movement of a vehicle.

Two uses therefore come to mind: The Electro-Matic controllers might have been used for gate access or to control a traffic signal onto Mission Street.

The most likely explanation is probably to trigger the gate - and maybe the box is still in use today for that purpose!

(But it would be more interesting if it assisted with access to Mission Street at one time!)

Does anyone know?  And are there any others hidden around in Salem?

(There's also more information apparently on this Traffic Signals Forum site, but the posts are strangely password protected.  Are there trade secrets or secret traffic engineer tradecraft?  What's the deal with that?  Are we going to find the answers there about the secret Moses-Eisenhower Autoist Highway Conspiracy???)
Posted by Salem Breakfast on Bikes at 12:01 PM

Hi, check following YouTube video and you will find a complete explanation of what the control box does. The sequence is in the last third of the clip, hope you enjoy it....
https://m.youtube.com/watch?v=hu8SrcOeDZU&index=1&list=PL_hX5wLdhf_LtIyZffHmSLqooV0BTP8Ou