The Portland-Eugene Passenger Rail project has posted materials and online commenting from the Open House on Tuesday.
The presentation has charts like this with the scoring against estimated costs.

I'm not sure they chose the best scaling on the X- and Y-axes, but the charts look like Science!

If you couldn't make it to the Open House, check it out. 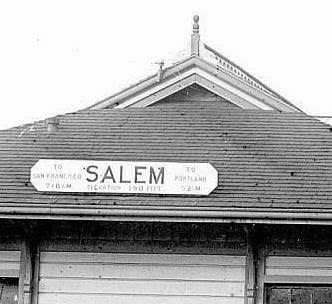 On the agenda is an update on the Baggage Depot restoration and rehab.

For some reason the old Baggage Depot's relation to the old Passenger Depot was never clear to me.  Happily, as part of the project's web page, ODOT has posted a slide deck with some images that placed side-by-side make it clear!

This birdseye isn't part of the presentation, but it shows how the Depot was almost a T-shape and had two rectangular volumes mashed together.  The one on the south end has endured!


You can see a nice view of the Passenger Depot that burned down here (but I'm pretty sure the library has it mislabeled as on Front Street rather than on 13th).

In the presentation is an interesting analysis about moving the Depot a little after the fire and whether it was rotated 180-degrees.  The evidence is conflicting and unclear!  The chimney location today, for example, doesn't line up with the historic images.  Windows and doors have all been altered as well.

When the rehab is complete, Greyhound will move into it, and there will be enhanced facilities for people on foot and on bike - it'll be a multi-modal walk/bike/bus/train hub, they say!

Check out the neighborhood meeting or online.
Posted by Salem Breakfast on Bikes at 7:00 AM