2014 in Review: Boise and the Riverfront Finally Come Together

This is the sixth year-end review on the blog. If there's one thing that's become clear from them, it's that each time momentum seems to gather for real change, things stall and revert back to 20th century norms. 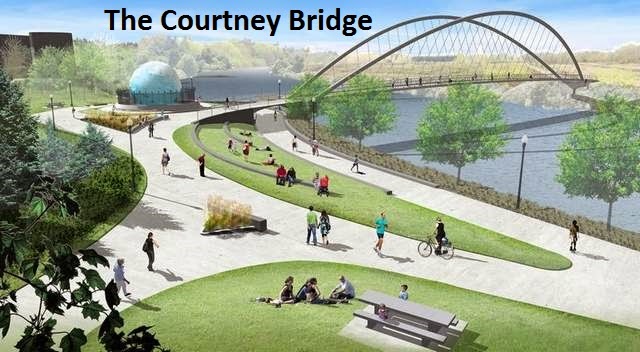 For every new bike lane, there's a giant intersection widening. A few sharrows are spattered around town, but we never build on them to develop the next step in a bikeway. We don't leverage them to make new connections, and we don't upgrade existing bike lanes to protected bike lanes or cycle tracks. In all things we are better at funding and writing plans than at funding and executing those plans.

If last year was dominated by debate and argument about parking, this year doesn't seem to offer a single neat narrative. (Maybe you will see a theme that ties them all together, or have a very different ranking?) This year's review will meander and scatter a good bit: Like our policy choices, this post will be incoherent.

Boise and the Bridges: Connections to the Park
Wallace and Glen Creek: Barriers to the Park

From here, though, it seemed like completing some huge pieces of the jigsaw puzzle on the Boise Redevelopment, Riverfront Park, and the Courtney Minto Bridge was the biggest, most important story of the year.

Developers broke ground on Boise, the City agreed to buy the Park Parcel, final funding and permits came together for the Courtney Minto Bridge. There were a lot of positive developments on an important part of the larger project to connect downtown to the riverfront.
(More on Boise here, and the Courtney Bridge here. The path system under and around the new Commercial Street Bridge is also part of the story.)

A close second, and not such a happy story, one in fact that exemplified the push-me-pull-me dynamic in our facilities, was the simultaneous small-scale ARRA make-work of the connector path between the Union Street Railroad Bridge and Glen Creek Road while at the same time the City and ODOT undertook a massive degradation in the walking and biking environment by widening the intersection of Wallace and Glen Creek.

The incoherence is Salem in a nutshell.

Path connections in Wallace Park are also likely to be degraded further by Marine Drive's encroachment on the park.

If the Boise project knit the river closer to the city, Wallace widening projects drive the city away from the river. (Read more on Wallace and Glen Creek here.)

There's more of that push-me-pull-me here...
And then some deeper background noise
These will be bigger stories in 2015 and 2016, I'm sure.
Finally, two things that really aren't significant for transportation, aren't very significant in the urban fabric, but which seem important public spaces to note nonetheless. Both the Columbarium at the State Hospital and the World War II memorials were completed.

So what's missing? Do you rank things differently? Maybe you see an actual narrative thread and set of themes!
Posted by Salem Breakfast on Bikes at 7:00 PM

While it's not a local story at all, surely one of the biggest transportation stories is the price of gas! Cheap gas isn't on your agenda, clearly, but nevertheless that's a pretty significant development this year in transportation.

Thanks for this review and for all your insightful analysis in 2014. I wanted to say that there is reason for optimism that 2015 could be the year that the Salem River Crossing project comes to an end. First, you may underestimate the influence that City Councilor-elect Tom Andersen may have. He credits his opposition to the 3rd Bridge as one of the main things that got him elected. He is going to be outspoken on the issue. Also, Dan Clem, who was far and away the #1 champion for the 3rd Bridge is gone. His successor on the Council, Jim Lewis, will be nowhere near as influential. We have heard very strong criticism of the latest designs from Councilor Chuck Bennett lately. He can have a great deal of influence with the Mayor and others if he will use it. Finally, the DLCD has indicated several times that they are not inclined to allow expansion of our UGB and grant exceptions to state land use laws to build a 3rd Bridge. Their strong opposition could also prove fatal in 2015.

Yestereday's "2014 top environmental stories in Salem" actually had only one real Salem story: the possible cancer cluster in West Salem.

The other stories were much larger in scope:
- Fukushima Radiation on the coast,
- The statewide GMO vote and associated politicking before and after,
- Bee deaths in other communities and the state-level Task Force on pesticides, and
- Drought in other counties

There was very little on Salem-area polluters, on the relation between development and environment in Salem, on the Third Bridge and transportation as an environmental issue - etc

It seems like there's a real opening for a much more focused and local approach to environmental issues in Salem.

Agreed, Anon1 and Anon2. Additionally, here's some skepticism that cheap gas will much more driving.

I hope you're right on both counts, Jim - that Councilor-elect Andersen will be more influential, and that the Bridge will finally meet an immovable road block!