Whether to Fund a Giant Bridge and Highway: Funding Fantasy Wednesday

The workshop for whether to pay for a giant bridge and highway is tomorrow! 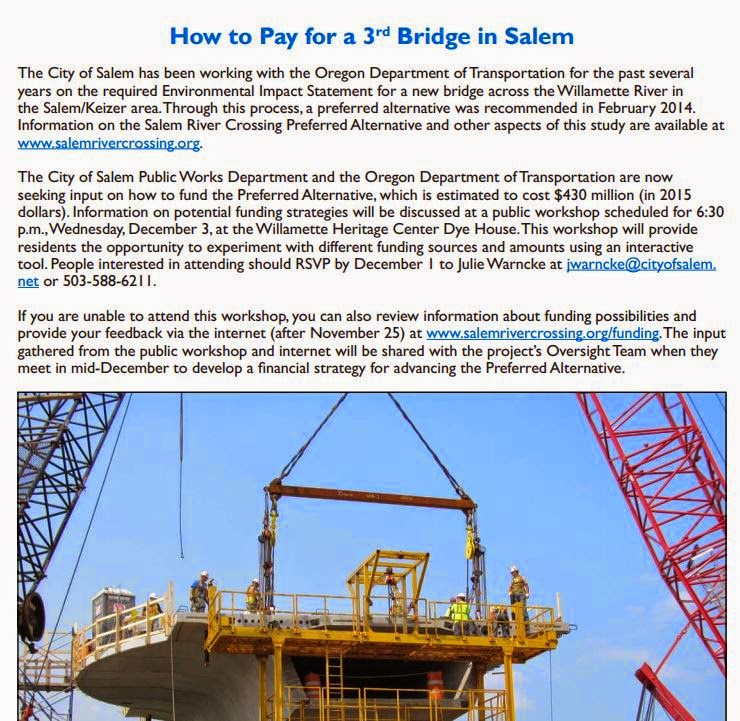 It all sounds so innocuous, doesn't it?


The City of Salem has been working with the Oregon Department of Transportation for the past several years...for a new bridge.... [The City and ODOT] are now seeking input on how to fund the Preferred Alternative, which is estimated to cost $430 million....Information on potential funding strategies will be discussed at a public workshop scheduled for 6:30 p.m., Wednesday, December 3, at the Willamette Heritage Center Dye House.

It'll be painless, really, you won't feel a thing...

Already we've sunk almost $7 million into the stacks of paper and meetings.

As you can see from N3B's year-by-year graph, there's some variation, but thinking of the project as spending $60,000 a month for more than 100 months is a way to grasp the waste in planning.

In round numbers that's a pedestrian median and enhanced crosswalk once a month, every month.

More than 100 could have been installed around the city and region.

Or how about a bike park? SATA's trying to raise $75,000 for a bike park, and that's a month and a week or two of the average bridge planning spending.

(Of course this is theoretical; the monies come from different sources and budgets and can't just be shifted from Bridge Planning to Median or Park Building, but what this does tell us is something about choices and priorities in policy.)

Over at N3B folks are organizing for the workshop. A critique of the funding choices - indeed a community-wide agreement that, in the face of other, far more urgent needs, like the seismic reinforcement of our existing bridges, city hall, and other key infrastructure and institutions, we can't afford a giant new highway and bridge - might be the best way to pull the plug finally on this folly.

If we're gonna raise new taxes, let it be for things we need, not shiny new things we want. (And of course many of us don't want it at all, but proponents of the Third Bridge should recognize that it's a want, not a need.) And let's be clear about what we won't be able to afford if we make this choice to tax ourselves for this concrete frill.

Because, of course, we're talking a lot more than $7 million!

That's one bare-bones seismic retrofit of both the Center and Marion Street bridges a year. Or about a full, enhanced retrofit of one bridge every other year.

There's a lot of different ways to think of the amount.

Interestingly, a $2.00 toll, a property tax of a dollar on every $1000 of assessed value (never mind compression!), and a ten cent gas tax wouldn't be enough!

Heck, if we'd just toll the bridges, all our congestion woes would be solved and we'd have revenue for the seismic retrofit.

So the workshop is all framed as "how should we fund the bridge," but the real question is whether we should fund it at all.

So tomorrow night remind your tablemates there are many questions whether, and not just how, a giant bridge and highway should be funded at all.

(An RSVP is not necessary, by the way!)

re: "a property tax of a dollar on every $1000 of assessed value (never mind compression!)"

The whole property taxes and compression thing is a mess and hard to understand, but I believe that with a special bond measure, if one were to pass, the tax would be exempt from compression. That's a reason bond measures are - relatively speaking - a popular way to raise funds.

thanks for the clarification!