Variations on "Main Street" are important in so many ways for us. There's downtown, North Broadway, the Commercial Vista Corridor Study, and soon there will be State Street.

So it's with interest to note the Project for Public Places blurbed the fall edition of Main Street Now. I don't know anything about the periodical, but it looks very interesting and timely. 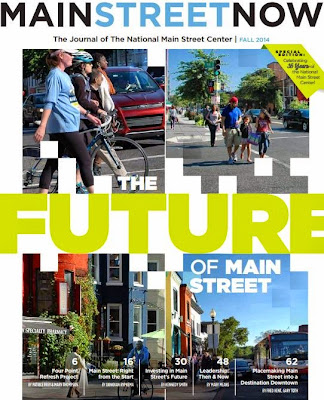 
Speed kills sense of place. City and town centers are destinations, not raceways, and commerce needs traffic—foot traffic. You cannot buy a dress from a car. Even foot traffic speeds up in the presence of fast moving vehicles. Access, not automobiles, should be the priority in city centers. Don’t ban cars, but remove the presumption in their favor. People first!...

Designing road projects to fit community contexts can help increase developable land, create open space, and reconnect communities to their neighbors, a waterfront, or a park. They can reduce household dependency on the automobile, allowing children to walk to school, connecting neighborhoods to downtowns, and helping build healthier lifestyles by increasing the potential to walk or cycle. Think public benefit, not just private convenience....

It is also essential to foster landuse planning at the community level that supports, instead of overloads, the transportation network. This includes creating more attractive places that people will want to visit in both new and existing developments. A strong sense of place benefits the overall transportation system. Great Places—popular spots that have a good mix of people and activities and can be comfortably reached by walking, biking, and perhaps by public transit as well as by car— put little strain on the transportation system. Poor land-use planning, by contrast, generates thousands of unnecessary vehicular trips, creating dysfunctional roads, which further deteriorate the quality of places.

And that's what we're talking about here!

So check it out. The Commercial Vista Corridor Study is in an important sense a project to transform this section of middle Commercial to be more like a "main street." Could be very good reading for that project.

The analysis is also, of course, totally applicable to downtown where, as it has been pointed out several times by others, the Liberty/Commercial couplet has more lanes than Interstate Five.

Climate Change in the News


Poo-pooing the concept of a carbon tax, the Governor apparently said that "I don't think you can have an effective carbon market with a state of less than 4 million people." But a carbon tax is different from a cap-and-trade scheme, which would involve the "carbon market." So this response is somewhat baffling. But maybe it doesn't have the necessary traction yet. (Report here, PSU press release here.)

You will also recall the League of Oregon Cities transportation funding proposal. Earlier this month at the MWACT meeting, folks heard about the proposal from the Oregon Transportation Forum. Both include adjustements to the gas tax.

Gas taxes and carbon taxes will be a definite topic at the Legislature early next year.
Posted by Salem Breakfast on Bikes at 6:30 AM