More on the Commercial Vista Corridor Study Issues and Opportunities

The Commercial Vista Corridor "Transportation Conditions Booklet" is posted to the website now, so let's take another pass at it.

The project team has also announced a workshop:

In the inventory of existing conditions, most of the analysis doesn't do much with the dimension of time; and it treats space as grid or empty container with things deployed in it, as a set of present or absent facilities (or kinds of facilities). But the inventory doesn't much look at how people move in space and in time. The only movements that are enumerated are turning movements by people in cars at intersections.

We look at 24-hour traffic counts, but we don't look enough at how it bunches and how much capacity is wasted because we are always planning roadspace and carspace for those two hours of "peak" traffic each day.

On this particular part of Commercial at Fairview and the Y with Liberty, there are sidewalks and bike lanes. But few use them. Why is that? Doesn't the existence of a facility guarantee its sufficiency? (Regular readers will know the answer!) But of course there's no crosswalk at the bus stop in the lower left. You will see people jaywalk here because the alternative is a three-legged crosswalk crossing. And it's ugly, even with a lawn and bark mulch. There is no element of interest or delight for the person on foot. Car speed is often high.

In order for the study to be a meaningful success it is going to have to dig deeper and propose real changes.

Let's look at a couple of ways it could go awry.

So far in the issues and opportunities identified in the Commercial Vista Study Corridor, there are a number of things that we really ought to be able to just assume, and should not require a study's analysis to "disclose."

Principally, there are a number of missing sidewalks, bike lanes, and lighting deficiencies. Can't we just assume it's obvious we're going to abate them? Do we have to fold a bunch of legacy remediation into this new study? I thought the study was going to identify ways we might go above and beyond current standards. Instead, a regrettable amount of study time and labor has already been spent identifying things that are obviously deficient.

Additionally - and this is perhaps looking more towards next year's State Street study - maybe the first act needs not to be engaging the consultant team for an inventory of existing conditions, but instead the first thing should be engaging a stakeholder advisory committee to walk the entire study area.

I wonder if these things are driven too much from the top, from the consultants and what planners "already know" about industry standards and even "best practices." Instead, maybe what is most needed is the "ground truth" from actual feet on the ground, especially the feet of those who ordinarily are driving in and around the study area. This will help better identify user issues as well as sensitize people to problems other kinds of users face and perhaps built more enduring political support for the eventual recommendations.

1. The Commercial‐Liberty “Split” is hard for bicyclists to continue safely onto Commercial St SE.
2. In peak periods, motor vehicles intending to turn left onto Commercial St SE are often backed up through several intersections.
7. Liberty Rd S currently lacks bicycle facilities.
8. Due to right‐of‐way constraints, there are no left turn lanes along Liberty Rd S which increases congestion and rear‐end crashes.

3. There are no sidewalks on the east side of this portion of Commercial St SE.
4. Transportation analysis shows minor street traffic on Ratcliff Dr SE experiences significant congestion during peak periods and fails to meet City operating standards.
9. The sidewalk facilities along these local roads are either nonexistent or have significant gaps.
11. Barriers exist for residences west of Liberty Rd S to easily access transit facilities along Commercial St SE.

5. It is difficult for pedestrians to cross Commercial St SE due to the wide roadway cross section. Land uses and transit stops encourage frequent pedestrian crossings in this
area.
6. [Year] 2035 traffic volumes will lead to intersection operations that fail to meet the City’s operating standards at this location. This intersection has the highest collision rate out of all the study intersections.
10. No bicycle connectivity exists along this portion of Madrona Ave SE.

Many of these issues are well-known and have already been analyzed in previous studies, principally Bike and Walk Salem:

One thing I worry about is that the study will position legacy remediation as a novel solution developed from the study.

Instead, can't we just assume basic sidewalks and bikelanes as a baseline, and develop enhancements that go beyond them?

Additionally,  #6, about "2035 traffic volumes" at Madrona and Commercial, looks biased towards an autoist widening solution rather than a demand management solution, one that creates additional human capacity without additional car lanes.

This winter when it snows, interested readers should take pictures of the roadways, especially where undisturbed snow shows surplus width and capacity in the travel lanes.

And again during snow storms the traffic camera at Commercial and Fairview should also reveal sneckdown extent.

With this in mind, the "opportunities" list is a little underwhelming.

Is it really a meaningful "opportunity" to say, "finish the sidewalks," as identified in #2 (etc) below?

As I read them, numbers 3, 4, 5, and 7 below are the more substantial opportunities identified in this preliminary swag (#5, because lighting was unexpected, even though it also is remediation).

1. That was Friday's cranky post.
2. Right‐of‐way currently exists to complete the sidewalk system along Commercial St SE.
3. Traffic control or pedestrian beacon design options could facilitate improved flow for motor vehicles and /or pedestrians at this intersection.
6. Improving the sidewalk system along local roads between Liberty Rd S and Commercial St SE and on adjacent side streets would improve connections to businesses and transit.
7. Alternative cross‐sections within the existing 40’ of right‐of‐way that would provide sidewalks, bike facilities, and parking could be considered as interim improvements.
8. Additional safe routes between residences west of Liberty Rd S and transit facilities on Commercial St SE for all modes of travel can be evaluated.

4. The wide right of way in this location of Commercial St SE could be used to improve multimodal mobility and access by adding a median, pedestrian crossing, or other enhancements. Narrowing the roadway cross section would also create an opportunity to widen sidewalks or implement planter strips.
5. Lighting conditions can be improved at this intersection and along the corridor.

Maybe it's a good time to revisit Jeff Speck's book, Walkable City. The book is written for downtowns, not so much for stroad mitigation. Still, its insistence on the primacy of the experience of people on foot is something that could very helpfully inform thinking about the Commercial Vista corridor. 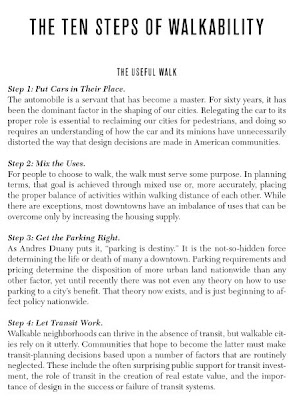 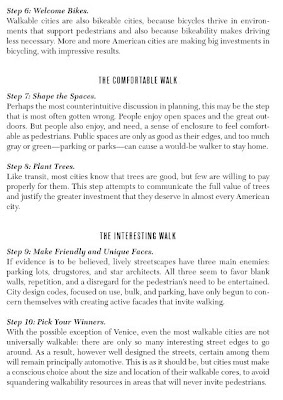 Basically, you're trying to make it so neighborhood locals will feel at ease, and indeed will want, to walk and bike for short trips. But maybe the more meaningful target audience is to make the street inviting enough that people who drive will park and feel like they could walk around, visiting several businesses on a single instance of car parking.

What will it take to make this stretch of middle Commercial a walkable neighborhood center?

The City's project website is here, and notes on middle Commercial and the study here.

This is making the rounds again today and yesterday, and it's worth considering:


Brilliant visual illustration of how much #publicspace we have given to #cars pic.twitter.com/jAYWBuO4hn
— Complete Mobility (@DewanMKarim) November 14, 2014

(It's uncredited here, but the source going around today says "The Swedish Transport Administration recently called on the skills of illustrator Karl Jirg to convey the small amount and precarious nature of street space dedicated to non-vehicle uses.")
Posted by Salem Breakfast on Bikes at 1:00 PM