It's entirely unsurprising that the environmental assessment at Boise is taking longer than expected. At a "special session" of City Council on Monday is a third set of amendments to the purchase and sale agreement for the park parcel.

The details on the environmental assessment itself don't look that interesting. Because, "duh."

There's lots of icky stuff and unknown stuff there, and no one should be surprised the process is taking longer and costs could be greater. (But one can wish that folks would start these processes more "pessimistically," and increase the odds of underpromising and overperforming instead of overpromising and underperforming.)

More interesting for our purposes are some new details on the proposed path connection along Pringle Creek.

The Original Purchase and Sale Agreement from January 2014 had a fair bit of TBD detail in Section 6.4:


This Amended Purchase and Sale Agreement now starts to fill in some of those details:


It got a lot longer!

One thing that is interesting - I don't know enough to say whether this is bad, unexpected, or entirely routine - is that despite all the subsidies in the overall project for the developer, a lot of the cost for the path connection seems to fall onto the City:
These are balanced by the fact that in the amendments is $200,000 being "held back" by the City and specifically directed for use by the developer in environmental remediation and abatement as required by the environmental assessment. That is to say, at the moment the abatement costs will come out of the purchase price and will not be added on top of it. If abatement costs go above $200,000, they will be at the City's cost or will offer the City an opportunity to exit and cancel the purchase agreement for the Park Parcel.

I don't think there's enough information here for us to say this is good or bad. I read it instead as a moment in the on-going and still-dynamic negotiation between City and developer, and not therefore something we should freeze and then rush to praise or criticize.

Council meets earlier than usual, at 5:15pm, and there is only this one item on the agenda. It truly is a "special session"! 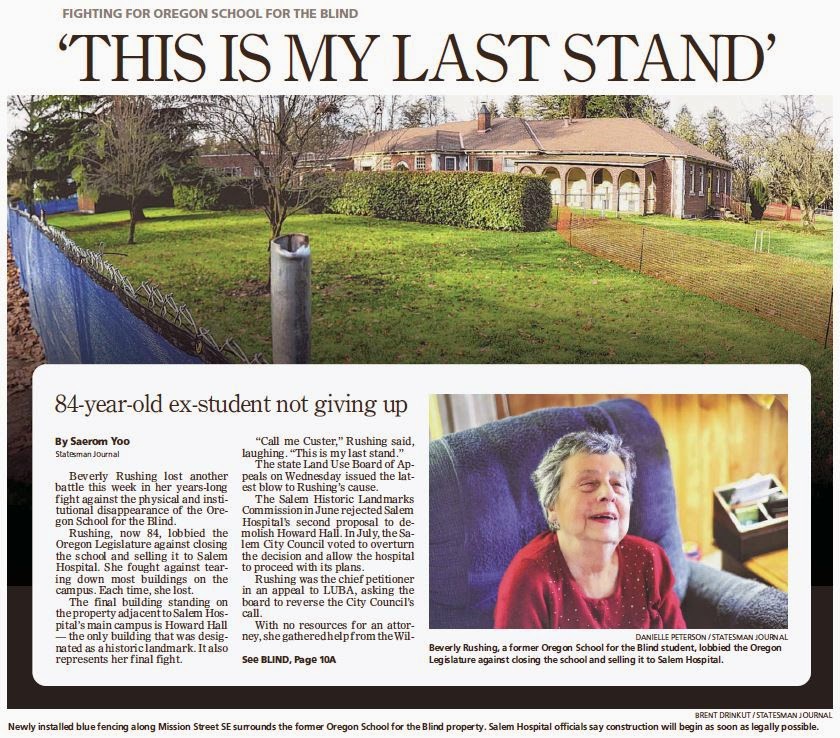 You probably saw the notice in the paper today that the first decision came down from LUBA, and it was not good. (Update - here's the decision posted to LUBA, where it is easier to read and download.)

The matters in dispute were distilled to five possible "assignments of error" and LUBA decided for the City on every one of them.

On several that were classified as a "substantial evidence challenge," LUBA noted:


In reviewing a substantial evidence challenge, LUBA's role is not to reweigh the evidence, but rather to determine if a reasonable person, viewing the whole record, could reach the conclusion that the decision maker reached.

This is disappointing. Naively, it turns out, at least some of us on the sidelines expected LUBA would do something like "reweighing" the evidence and find deficient the case articulated by the City and Hospital.

But apparently all LUBA has to do is look at the body of evidence provided by the City and say, "Oh, that looks plausible." THEREFORE: "The first assignment of error is denied." BAM. (etc)

It looks like an additional appeal on the demolition would be difficult. I suspect it's case closed now on this. Sad.

Beverly Rushing has filed a notice of intent to appeal LUBA's decision to allow Howard Hall to go down. Her story: http://t.co/zwkCU1iT9U
— Saerom Yoo (@syoo) January 7, 2015

It'll be interesting to learn more about the grounds for the appeal. It would seem necessary to find a path to "reweighing" the evidence, but an appellate review here doesn't seem like the kind of thing that would do that.
Posted by Salem Breakfast on Bikes at 11:00 AM

There are rumblings that SCAN's portion of the appeal at LUBA went much better, and that the matter has been remanded back to the City. Look forward to learning more, but this sounds like good news!

updated with note about a further appeal. And from the paper:

"On Wednesday, Rushing filed a notice of appeal with the Oregon Court of Appeals.

This is despite receiving a letter from Salem Health’s attorney Keith Bauer, discouraging Rushing from appealing LUBA’s ruling and telling her he would ask the court to order Rushing to pay Salem Health’s legal fees. Rushing doesn’t have an attorney."

You might find this useful. The Willamette College of Law summarizes LUBA decisions -

Doesn't really add anything to your notes, but it is a resource.

Word is circulating that Rushing's appeal was dismissed on a technicality and the Howard Hall side of things is over. It will be demolished.