There's so many things on Thursday!

Yesterday we mentioned the Cherriots Board meeting.

The high level goal, you will recall, is


to identify specific project to manage traffic, enhance connectivity, and provide a welcoming environment for walkers, bicyclists, transit riders, and motorists. The general approach will be to identify short-term projects for immediate implementation as well as incremental improvements that can be constructed as funding becomes available or in conjunction with private investment actions.

Tame the vastness and speed!

Between Madrona and Ohmart, with businesses like LifeSource, Venti's, Panera, Cafe Yumm, French Press, Acme, Five Guys Burgers - there are lots of neighborhood-scaled businesses that should be walkable and bikeable here, but the roadway is configured here as an autoist firehose.

The Commercial Corridor Study kicks off publicly with two meetings on Thursday:
Since the more urgent Salem River Crossing Oversight Team meeting is also on Thursday, it is convenient that two neighborhoods adjacent to the project area will be discussing the study some on Wednesday, the 10th.

Morningside will get a general update on the project at its monthly meeting.

Already moving to commentary, at their meeting SCAN will offer for deliberation a "Statement of Concern about Commercial-Vista Corridor Project." It will be interesting to learn more about concerns expressed already before the thing has formally started the public phase. Has the City messed up already? Or is it just fear of change?

The South Central Association of Neighbors meets Wednesday the 10th at 6:30 p.m. in the South Salem High School Commons [not the library, note the change!] at 1910 Church Street SE.

(For all notes on the Commercial Vista Corridor Study, see here.)

The Transportation Operations and Safety Analysis memo is posted.

Not surprisingly, most intersections rated "poor" for traffic on foot or on bike. (I wish there was an additional "execrable" designation. "Poor" is too polite.)

The crash rate analysis is interesting, especially because of the way it shows we accept a baseline of death and injury as an acceptable cost of using our roadways. 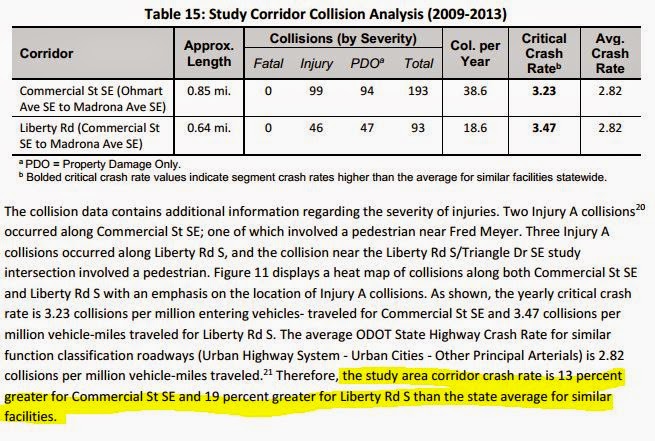 If the project aims at reengineering the roads to meet state averages, it will not have accomplished much.

A table from an analysis of street-lighting conditions with a special focus on intersections shows a whole lot of "Does not meet standards."

Finally, the preliminary recommendation does not appear to endorse a three-lane "road diet" treatment for Liberty Road South between Browning and the Y-intersection.

There's a good bit to see, and there may be more to say later!
Posted by Salem Breakfast on Bikes at 12:01 PM

So, on Lancaster Dr where I have some experience with land use, we have tried a few things to help foot traffic. One was to say that all shopping areas needed to have access to neighborhoods with pedestian paths. These unfortunately soon became quick ways for thieves to go into businesses from the rear and excape once they had burgled the businesses and hide in nearby apartments, or park their get away vehicles. So, that was soon nexted by business owners.

Second thing we tried was to say that all parking lots had to have connectivity. This was to reduce the need for so many driveways on Lancaster. This worked better, but it was hard to get existing businesses to agree due to what they said was liability issues. I think, a city code can force them to do this upon remodelling, but I am not sure if it is enforced, or if it only applies to new construction.

The biggest issue of course on Lancaster is that we need to have separation by some sort of barrier between traffic and bikes to make people feel safe. From experience we know that even at times, sidewalks are not safe from vehicles.

Of course, the persistent issueis having adequate crosswalks. We kill a person or two each year on Lancaster because the lights are so far apart, people are forced to dodge traffic to cross the street.

Thanks for the perspectives from Lancaster!

The project team has posted the traffic analysis, and the post has been updated with a few excerpts.

Thanks to the City for posting these in advance of the meetings!