There's a couple of neat pamphlets out from the Thursday Commercial Vista Corridor Study, but neither of them are posted to the project website yet. We'll update the post here when they are published.

In the meantime, already there's a small moment for that queasy, sinking feeling.

In the "Draft Transportation Issues Booklet," number 1 on the "opportunities" map is an

But we already did this!!!

People on bike are directed to continue right on Liberty and at Vista there's additional signage to turn left on Vista, with a strong bias towards using the Crosswalk.

The only problem? This is totally non-intuitive and very few people do it this way.

In fact, when we did a bike count at this site back in 2009, we found:
The problem isn't that we have failed to "direct bicyclists onto Liberty Rd S until Vista Ave SE where bicyclists can connect back onto Commercial St SE" or even that we just simply need better signage.

We have tried this, and it doesn't work because it is non-intuitive, it is complicated, it doesn't increase comfort, and by an inconvenient bicyclist- and pedestrian-displacement system it overly accommodates the autoist firehouse.

The conclusion from 2009 remains valid:


The junction is bad because it is confusing and unclear. The vast majority of cyclists make the intuitive move to continue on Commercial SE. They miss or ignore the signed bike movement and choose a dangerous and illegal merge whose prohibition is signed. But with the bike lane marking the messaging is incoherent.

We need something completely different.

(If principals on the project team have not visited this intersection and indeed biked and walked through it themselves, and instead relied on contract labor for the manual bike count they did in June, they should themselves visit this particular site later this spring in fair weather to see for themselves how people actually navigate this dysfunction junction. The technical appendices do not address the movements of people on bike, and the operations and safety memo lists count data only. )

It is interesting also to see the "land use" opportunities map. All the land here is underdeveloped, with too much surface area devoted to cars, their storage and movement. But even below this low-rise strip development, there's a group of vacant or even lower-density nothingness that should be redeveloped. 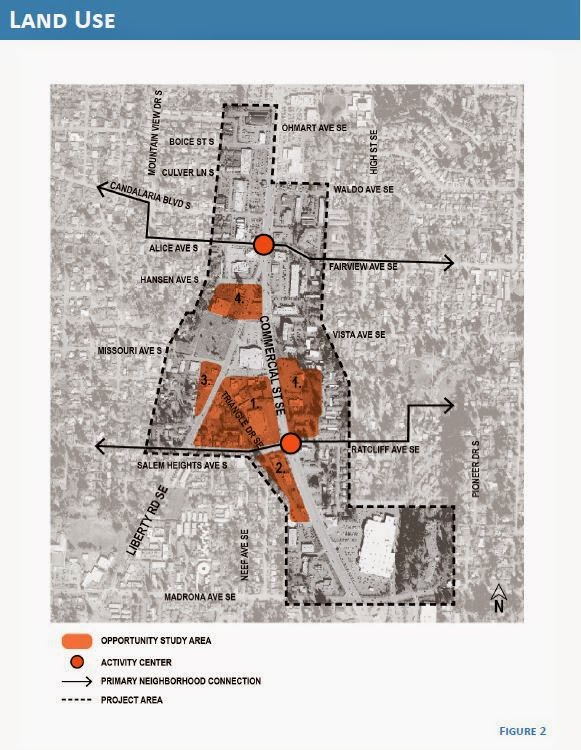 I hope the project doesn't get side-tracked with too much talk about jump-starting redevelopment on things like the Safeway parcel and its parking lot, and forget about making it easier to walk and bike to LifeSource, Venti's, and Acme.

And when it does talk about redeveloping, I hope it remembers that "main street" kinds of redevelopment, even two-story streetcar storefronts, create as much as an order of magnitude more value per unit area than do big boxes.
In the end, the draft urban design shows a clip of a standard stroady road:

But so much more is possible:

Already fans of the study may be seeing signs that should point to diminished expectations.

The City's project website is here, and notes on middle Commercial and the study here.
Posted by Salem Breakfast on Bikes at 1:00 PM

inserted a couple of clips from the traffic camera

and updated with inline links to the two reports