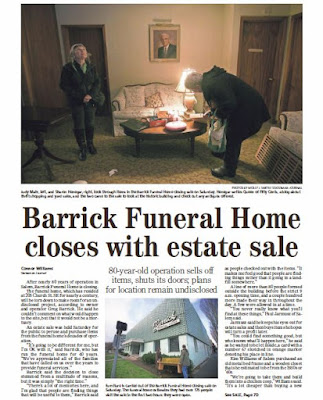 The building at the corner of Ferry and Church has always been a little mysterious. It looks like a mid-century thing, but there's an old chimney, and signs that underneath it might be the bones of a significantly older building.

There is sad news today that Barrick Funeral Home is closing.

Apart from the important role they had in rites for the dead, they also published a postcard series of historic photographs, many of which are reproduced in the library's collection.

You might also have gone to see a baseball game at Barrick Field.

Buried in the pictures from the estate sale is an image of some stained glass, and in older buildings around here, you always want to be alert to the possibility that it comes from the Povey Brothers. Hopefully it will not casually be destroyed. Even if it is not Povey Bros., it looks like a handsome piece that should find a new home.

The owner's plans are either not yet fully baked or he is wary of NIMBYism or other critique:


The funeral home, which has resided at 205 Church St. SE for nearly a century, will be torn down to make room for an undisclosed project, according to owner and operator Greg Barrick. He said he couldn't comment on what would happen to the site, but that it would not be a mortuary.

More housing in a mixed-use development like the 295 Church Street project and the McGilchrist and Roth renovation would be a boon to downtown!

Anyway, this corner is one to watch now, and the demolition, as it potentially reveals the older structure underneath, could be very interesting.

(Without knowing anything about the building, it looks on the surface like it has had many layers of remodeling, and does not seem like a candidate at all for preservation. This looks like it could be a clear instance where appropriate deconstruction and salvage of components and materials followed by new construction would represent the highest use of the site. Especially if you have reason to disagree, chime in!)

A reader sends a link to a sale listing!

They're asking $685,000 for it and give an approximate construction date of 1932. Presumably this also means "plans aren't fully baked yet."

Unfortunately, it's in an overlay zone that permits a drive-through. Hopefully that won't be the defining feature of a redevelopment.
Posted by Salem Breakfast on Bikes at 9:00 AM

Shoot, the Barrick postcard just shows one of the span units, not the lift span. Corrected the caption.

You can see it here -
https://en.wikipedia.org/wiki/Union_Street_Railroad_Bridge

Thanks anon for the second opinion!

The city of Salem just took in an application for a class 3 site plan review. Wadsworth Development Group from Utah is the applicant. They do lots of drive-through Starbucks, it seems.