Over at N3B they note the Salem River Crossing Project has been going now for a decade. But of course the fantasy for a Third Bridge has been around much longer. A 2004 report on Oregon's part of the Interstate Highway System recently turned up in some research, and it has a nice chapter on the abandoned I-305 concept, which included an extension for a Third Bridge. Even in outline a lot of this has seemingly gone down the memory hole, and many of the details were new. 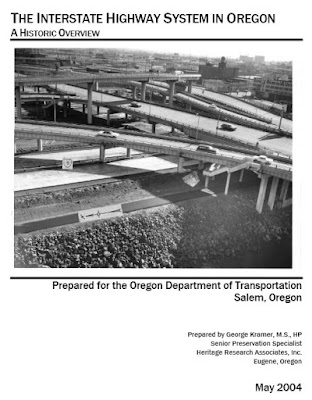 (I don't know if the author intended this irony, but if you wanted to point out the sterility and cost to cities of the urban land wasted by the Interstate system, this cover image is pretty good!)

Anyway, here's the whole section on I-305 from The Interstate Highway System in Oregon: A Historic Overview. 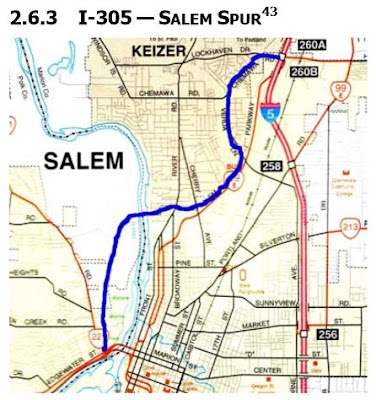 This roughly four-mile spur was to join I-5 and connect to Salem. As originally proposed, the route was to begin at Keizer on I-5 (at the time still referred to as the R. H. Baldock Freeway) and follow Chemawa Road, continuing into the existing Salem street grid. Later, the project was modified and extended approximately 2.34 miles to include a new bridge across the Willamette River, and to meet Oregon 22 (Willamina-Salem Highway No. 30), providing increased access within Polk County.

Three different corridor options for the original design were the subject of a July 1968 public meeting. The chosen alternative (No. 3), ratified by the Salem City Council, was submitted to the Bureau of Public Roads for approval in November of that year (ODOT GF, Salem Resolution 68-156, 8 July 1968). The estimated cost for the project at this time was $14.5 million (ODOT GF, Cooper, letter to OSHC, 8 November 1968).

In January of the following year, State Highway Engineer Forest Cooper, apparently for the third time, requested an extension of the I-305 corridor from the Bureau of Public Roads under the Federal Aid Act of 1968 (Figure 28).


We are submitting for your reconsideration and approval, ...a map showing a proposed extension of I-305 (Salem) from Pine Street westerly across the Willamette...an addition of 2.34 miles to the Oregon Interstate Highway System. This request has been previously submitted under our letters of August 2, 1963 and October 11, 1963...(ODOT GF, Cooper, letter to R. E. Simpson, Division Engineer, BPR, 6 January 1968).

This request for extended mileage apparently met with little favor, as the additional Interstate miles and dollars made available by the Aid Act of 1968 were highly sought after and the proposed 2.34-mile extension of I-305 carried an estimated cost of some $35.5 million dollars. As late as Fall 1970, a local “Third Bridge Committee” petitioned U.S. Transportation Secretary John Volpe to approve the project.


We are pleading to give our city a chance....we need a third bridge to grow geographically [and] economically....We strongly support our government’s actions and application for the 2.34 miles across the Willamette River as a part of the Interstate Route I-305 (ODOT GF, Phil Jamison, Chair, letter to Frank Turner, FHWA, 24 September 1970).

Despite the local and state support, the cost of the third bridge and extension to 1-305 was not reviewed favorably by the Federal Highway Administration, and the project apparently stalled to some degree, as various options were considered. Because of the delay, and also because of changes in Federal law adopted subsequent to the original submittals, the redesigned project was required to file an Environmental Impact Statement, which opened up the public discussion in the early 1970s, the same period in which the I-205 controversy was raging in the Portland area. As required by law, new public hearings on the route and proposed design were held. The following comments reflect some the new public concerns surrounding freeway construction.


Fifteen to twenty years ago the Baldock Freeway was constructed to connect Portland to Salem...the planners wisely chose to route it around the city to the east [and] Salem was spared the physical division and dissection which was the fate of many other cities....now the planners are attempting to reverse this wise, foresighted policy by constructing I-305 into the heart of Salem...I suspect this unneeded freeway will be built simply because it can be funded 90-92% from federal highway funds while other more worthwhile highway projects can not receive this kind of funding (ODOT GF, Barbara Myles, letter to Senator Robert Packwood, 6 March 1973).

Local elected officials, responding to the growing opposition to the route through neighborhoods in northern Salem, included State Senator Keith Burbridge, who wrote the State Highway Engineer regarding impact of the route.


Although reasons have been cited to justify this route, no major urban development can be constructed without creating some degree of negative impact. I-305 is no exception. This facility, however, was designed to minimize some of these impacts. The proposed route for I-305 passes largely through vacant and low-density areas upon the periphery of the Keizer community....(ODOT GF, Klaboe, letter to State Senator, 7 May 1974).

Complicating the construction of I-305 were new Federal rules that allowed monies allocated for Interstate construction to be re-allocated for other transportation projects in the area, creating a potential economic windfall for local and state governments being battered by the Environmental Impact Statements, legal proceedings, and public outcry that was becoming an increasingly regular component of the Interstate highway planning process. In December 1976, the ODOT Director Robert A. Burco informed the Oregon Transportation Commission that “Today I was informally notified....that Marion County, the City of Salem, and the local Council of Governments have all passed resolutions endorsing withdrawal of I-305 as an interstate segment and transferring those funds to other projects in the Salem metropolitan area...” (ODOT GF, Burco, 16 December 1976).

The following month, in concert with the Transportation Commission, Oregon Governor Robert Straub formally requested of the Federal Highway Administration that the Salem Spur (I-305) be withdrawn from the Interstate Highway System.


We have completed our review of your proposal ...and have determined that Interstate Route 305 is not essential to the completion of a unified and connected Interstate System....The length of the withdrawn route is 3.3. miles....In accordance with the provisions of the 1976 Federal-Aid Highway Act, the current amount of Federal funds authorized by this withdrawal for substitute projects serving the Salem urbanized area is $34.3 million (ODOT GF, William M. Cox, Federal Highway Administrator, letter to Governor Robert Straub, 30 September 1977).

“One...peculiarity about Interstate withdrawal is that the original cost of the route segments withdrawn escalate with the National Construction Cost Index...the I-305 value has increased to $54 million” (ODOT GF, Moehring, letter to Michael C. McGuire, 13 July 1983). Some of these funds went toward widening a bridge across the Willamette River and toward the completion of the Salem Parkway, which joins I-5 at Keizer and connects to downtown Salem, following much of the route originally identified for I-305. The Salem Parkway was completed in 1986.
[note 43]: The map of I-305, as well as all the subsequent unbuilt sections of Oregon Interstate, are of general location only, since, in each case, numerous route alternatives were considered before the project ended.

[Additionally, ODOT GT = "general files" in the ODOT archives]
Posted by Salem Breakfast on Bikes at 10:00 AM

I have often wondered why they just don't put a bridge in at Wheatland Ferry. This could connect I-5 to 99W. Of course if it is not about getting traffic around Salem and just to Keizer Station, then I guess this Pine Street route might be prefered.

I do recall some of the chatter about a 3rd bridge back in the 1960s. I think there was also a suggestion to extend out Kuebler too, but I guess it is pretty environmentally sensitive. The idea was that people could use the existing bridge at Independence.

This is clearly something that has gone on for decades and is probably not going to be resolved for many more. Truth is that the best crossings have already been identified.

Regarding Susann's comment, it will be interesting to see how the Newberg-Dundee bypass project that is underway affects traffic patterns, such as from the Metro area to Polk County and the coast. It may become a preferred route for freight haulers who might now be coming through Salem. It may lessen the need for any new bridge between Salem and Wilsonville.