Here, at least, though it is buried fairly deep, there is a section on non-auto road users, more vulnerable people on foot and on bike. 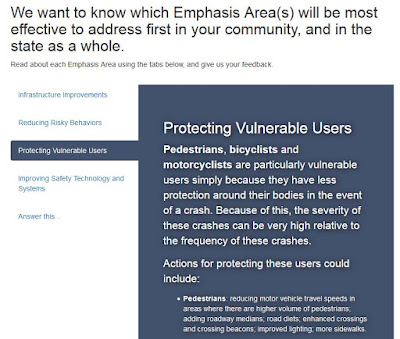 Earlier in the presentation they showed speed as the number one contributing factor. 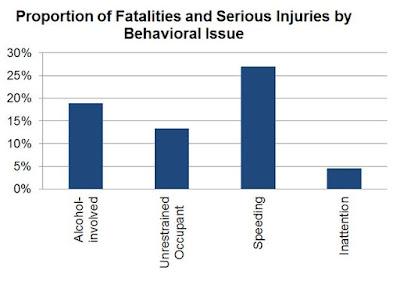 But addressing speed gets caught up in the notion of spot speed reductions rather than a system-wide reduction in speed, at least in urban areas. (It also may not give sufficient attention to the ways that road "design speed" and our engineering standards implicitly encourage said speeding, and in addition to posting lower speed limits, we need to design for lower speeds. There's a structural contradiction between our saying "don't speed" and our design and engineering which says, "if you speed, we will keep you from harm.")

More than this, the biggest harm reduction strategy is almost certainly to make it easy for people not to drive rather than trying on the edges of driving behavior to make driving more safe.

Until we are willing to define auto use as an inherently dangerous activity, we will continue to fiddle on the edges of things and not change things at the level of systems.

Anyway, check it out, and let them know safety for non-auto users is important.

From the Department of Transportation release:

The eight-member committee, appointed by the governor, acts as a liaison between the public and the Oregon Department of Transportation. It advises ODOT in the regulation of bicycle and pedestrian traffic and the establishment of bikeways and walkways. Members serve four-year terms, and the makeup of the group must include:
The committee meets up to six times per year, with several of those meetings in locations outside of the Salem area. Throughout the year, the committee gathers input from residents, officials and ODOT staff as it considers bicycle and pedestrian transportation-related issues. Travel expenses are reimbursed. Upcoming work items include implementation of the new Oregon Bicycle and Pedestrian Modal Plan, ConnectOregon VI grant application review, and input on the department’s new intermodal policies. Interest forms are available at: http://www.oregon.gov/gov/admin/Pages/How_To_Apply.aspx.

Also, Parks and Recreation has announced some proposed changes to the Scenic Bikeway program:


The Oregon Parks and Recreation Commission adopted OARs in 2009 that established a process for designating Scenic Bikeways in Oregon. Since that time a Scenic Bikeway Committee has been established and a program for rating and managing the bikeways has been developed. The proposed rule revisions will align the rule with current procedures, change committee membership to include more diverse representation, and clarify the Oregon Recreation Trails Advisory Council’s role in the designation process.
Proposed Revisions   Statement of Need/Fiscal Impact   Notice of Proposed Rulemaking

You can send your comments via e-mail at OPRD.publiccomment@oregon.gov.

It's hard to tell if these are benign or represent a diminishment of the program. If Scenic Bikeways are important to you, it may be worth a closer look.
Posted by Salem Breakfast on Bikes at 12:01 PM