On a Snow Day, Cherriots Gets too Little Love

It was interesting that the City's social media, several notes yesterday and today, conspicuously omitted transit as a commuting solution in snow and ice.

By contrast, Portland Bureau of Transportation plugs it strongly.

Even Portland's traffic engineer in charge of signals lauds it.

This is generalizing from a small sample, so it's not like it's a statistically valid inference or anything, but the difference in tone between a couple of public statements on transit is striking. 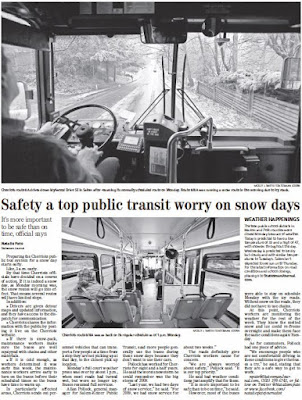 Even in the paper it's considerably more defensive in tone than Portland's celebration of transit. It's like the implied audience doesn't really know about Cherriots or believes buses are not safe.


As for commuters, [Cherriots GM Alan] Pollock had one piece of advice.

"We encourage people who are not comfortable driving in these conditions to give the buses a try," he said, stating that they are a safe way to get to work.

By itself, a greater awareness of Cherriots in our City social media won't necessarily change much, but as an indication of differences in deep civic culture and values, it says volumes: We treat transit as a fringe thing rather than a core form of urban mobility.
Posted by Salem Breakfast on Bikes at 2:30 PM