McGilchrist Block Parking a bit Careless, and May not be to Code 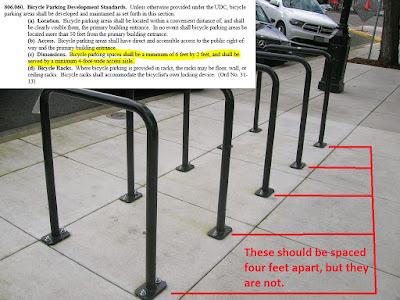 Coming into downtown, I never use State Street. Outbound for all but two blocks west of Liberty, it goes in the wrong direction and isn't useful. Consequently, I have never used or even looked at the newish bike parking in front of the McGilchrist block on State Street.

But perhaps very few others do as well. (Have you used this set of racks?)

If you wonder why we harp on bike parking here, well it's because it gets overlooked so often.

Code is perhaps ambiguous, and if you don't bicycle, the code is written in such a way that it would not be difficult to misunderstand what constitutes a "stall" or "space":


Bicycle parking spaces shall be a minimum of 6 feet by 2 feet, and shall be served by a minimum 4-foot-wide access aisle.

Staple racks like these are intended for one bike on each side, and so by code a row of them should be installed with four feet of space between each pole mount. (If you place two 6x2 "spaces" side-by-side, you get a 6x4 box; each staple rack, then, would be centered in a 6x4 box, and the racks spaced on four-foot centers.)

I didn't have a tape measure, but the spacing on these is much closer to two feet than to four feet (maybe the concrete seams are on three-feet spacing?). If you considered each staple rack as having only space for one bike, then there would be two feet of space, and it might appear they meet code. But if you intend for each rack to hold two bikes, then they do not meet the intent of code.

Nor do they likely meet industry standards. Here's what the Association of Bicycle and Pedestrian Professionals says.

And here's the detail, which allows for a minimum of three feet between racks, but recommends four. 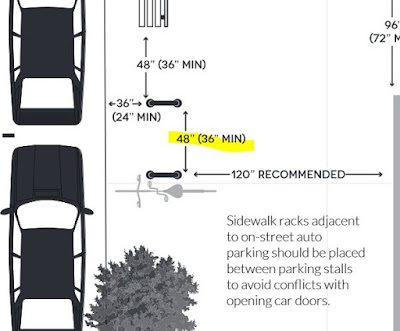 One of the subtasks for Bike and Walk Salem was to develop improved bike parking standards and to incorporate them into code. Separately, the subsequent "code clean-up" project was supposed to be "code-neutral" and not introduce any changes, so I don't believe the proposed changes went anywhere and Planning hasn't undertaken any new bike parking standards.

But it's likely that one of the side-effects of putting off this task is the persistence of bad or neglected bike parking installations. A more robust and clearer code, for example, might have staved off the disagreeable delay at Gaiety Hollow.

So, you know, this isn't a major problem. Right now, especially as we haven't bothered to make the downtown streets better for biking, there isn't the demand for bike parking to fill up all the racks downtown. Even at half capacity these racks are still usable. The spacing on the installation is really only a tiny nuisance.

But if we really want to create alternatives to drive-alone trips, as the Comprehensive Plan supposedly says (see #11 above!), we need to do a better job of making things like bike trips more attractive and an "easy" choice. Substandard bike parking installations don't help with this.
Posted by Salem Breakfast on Bikes at 12:01 PM