Now that we've got the holidays behind us, City meetings are cranking up again, and there are several small things to note this week. There's also a Statewide "vision" meeting as well, a reader pointed out the other day.

The most interesting is the update on the Portland Road study.

The North Gateway Redevelopment Advisory Board meets Thursday the 7th, and there's a substantial update on the Portland Road Corridor study.

A set of draft recommendations are out, and here are some highlights.

The top three scoring projects:
And a tie for fourth:
Projects that didn't score as highly include:

The ranking seems reasonable (though folks might overestimate the public market one at this stage). First get more people there in retail and housing, and then work on the roads. I suspect there's more latent demand for safe and comfortable walking and biking than people realize, but at the same time this an area pocked with placeless voids, and more than anything, filling it with people and activity will enliven the whole and confirm the demand for other things.

Still, I quibble with the notion of "transportation amenities," as if basic mobility for people on foot and on bike is still not considered foundational and integral, but instead is a luxury, a streetscape "enhancement" or "amenity" layered on in a secondary fashion. "Streetscape" itself suggests ornament rather than structure. 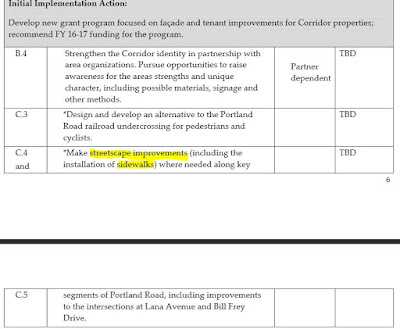 The West Salem Redevelopment Advisory Board also meets, the day before on Wednesday the 6th, and the minutes from the last meeting are also interesting.

Apparently "An estimated timeline for the underpass was reviewed (5 - 7 years)." So that's fairly near-term. It'll be interesting to learn more about what funding sources are envisioned.

Representatives from two businesses very close to the proposed underpass and Second Street extension spoke apparently about not being aware of the West Salem Business District Action Plan. It would be interesting to learn more about what mailings, emails, or whatnot failed to get through the filters. There are reasonable complaints about ways the City does not communicate effectively. But at the same time, when a process with public meetings has been going on for well over a year, and it's not just details that aren't getting communicated, but it's the whole plan concept that is missed - well, you may recall a note about the incurious nature of many Salemites on a Free Art Friday a few years back (down in the comments):


So we waited. And waited. And waited for an hour or longer. Not one single person stopped at the tree to pluck the painting from its bough. They chatted on their cell phones, cruised by on bikes and looked this way or that, but they didn't stop. I wondered how people could be so incurious (it's a word, I looked it up)....

Salemites often really seem to narrow down the focus of attention, and it sometimes seems there's also a willful refusal to notice City attempts at communication. This is a larger problem in civic engagement, that people sometimes just aren't interested in things that should be very interesting to them.

One neighborhood association had some notes of interest. Northeast Neighbors, mostly the Englewood neighborhood, meets this week and in the minutes to the last meeting were several comments.

On homelessness and how urban renewal has reduced basic housing:


The homeless situation is exacerbated by the loss of low cost housing such as the loss of the Senator Hotel when [Courthouse Square]... and the transit mall went in. The Pringle [Creek] Urban Renewal Plan destroyed much of the cheap low income housing in the area.

On the tour of Brietenbush Hall at the State Hospital:


No furniture...A lot of light. Swimming pool is still filled with water to maintain water present. State of Oregon spends $443,000 $43,000 a month to keep the building warm so that the pipes do not freeze. Fire supression system. This is a fire marshall requirement.

You might have seen on BikePortland a kerfluffle over a slide on construction activity.

Seattle is making real progress on this.

Alas, it was a problem at the Ice Cream Factory:


State Street sidewalk around Family Building Blocks closed for one month. Lane Closure for one day. [A resident said] that in New York City scaffolding would be put up instead of inconveniencing pedestrians for demolition. Discussion about the lack of pedestrian focus when making these decisions. Chuck Bennett noted that there were no allowances made for pedestrians to cross State St.

And on parking there:


The school and restaurant have the potential to cause traffic problems....[At another Family Building blocks site] There is limited parking in front of the building. Some...park in the neighborhing business parking lot. That owner will call for towing when they are there. [A resident] is concerned that a restaurant will make it hard to find a place to park.

(This is another example of a kind of ornamental emptiness: Not wanting an amenity like a neighborhood restaurant because parking might spill into the neighborhood. Truly, it's like we want a more vital city in the abstract, but when it comes to things that will actually enliven it, it turns out instead we want quiet and dead. Ornaments that nobody uses - sign me up! We really need to come to grips with the way our approach to parking inhibits better transportation and better urban vitality. There's a structural tension, even contradiction, that we aren't engaging.)

I didn't see anything on this week's meeting agenda to note.

NEN meets tomorrow, Tuesday the 5th, at 6:30pm in the Salem First Church of the Nazarene, 1550 Market Street NE.

You might see the word "vision" and find that your vision blurs and eyes glaze over. 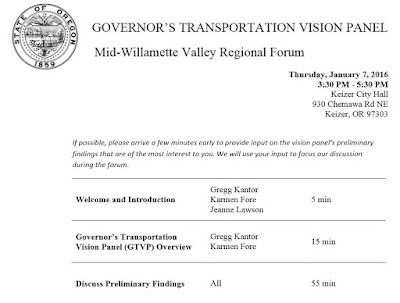 Nevertheless, Governor Brown wants to know what Oregonians want in transportation! A Vision Panel is visiting the state, and it convenes on Thursday in Keizer at Keizer City Hall.

The preliminary findings are here. One subcommittee included walking and biking, and they call for investing in Safe Routes to School, more bike lanes and sidewalks - the usual suspects.

However, the Roadways and Bridges subcommittee calls to "Prioritize increasing capacity and throughput of roadway bottlenecks through new investments."

Until we get serious about the idea that we need to meet additional mobility principally through additional non-auto capacity - and focus on better using existing auto capacity, of which we have insane amounts still - until we make the connections between the two halves, it's window dressing, not substantive, structural change. Making it easy for people not to drive will do much more for congestion than the vastly more expensive solution of building more capacity to make it easier to drive.

It's also not clear how this process would inform the new Statewide Biking and Walking Plan, for example.

The form solicits comment specifically on these recommendations:
Flexibility in school transportation probably deserves special note, as the redundancy and cost of yellow bus service layered over a regular transit system, the charlie foxtrottery of parental drop-off and pick-up zones and the staffing they increasingly require, and the plain concept of parking lots to serve teenage drivers - school transport is an egregious example of wasteful transportation.
Posted by Salem Breakfast on Bikes at 12:30 PM

Here are possible commenting themes for the vision project if you would like ideas:

- fix it first: Fix and Maintain existing capacity before building new expensive auto capacity
- add capacity with non-auto mobility instead
- speed freight and reduce emissions by making it natural for people to choose not to drive
- measure mobility of humans, not levels of service and delay for machines
- reduce posted speeds generally; design for posted speed, not 85th percentile speed
- twenty is plenty in urban environments
- prioritize safe and comfortable facilities for people on foot and on bike

CATC, the Citizens Advisory Traffic Commission also meets. There will be a hearing on a proposal to remove parking on Cross Street at Cottage Street SE. No agenda is posted, but they meet in the Room 325, the Public Works conference room, tomorrow, Tuesday, January 5, at 6pm.

There is a staff report on the CATC agenda.

Thanks for the review of the meetings and suggested comments.

Where is the agenda and staff report posted? I just checked, and the most recent one posted at the above url appears to be from August 6th, 2015.

The new NEN minutes contain a correction on the monthly cost to maintain Breitenbush Hall at the State Hospital. It is $43,000 not $443,000.