The Hub moved into a very old Safeway building on North Broadway last summer and the corner of Market and Broadway could really take off this year.
They've already announced some new programming for January and February.

First off is a class to build your own panniers out of recycled buckets.

On Sunday, January 24th they'll be hosting a workshop to make your own hauling capacity. Waterproof hauling doesn't have to be expensive like the Ortlieb bag on the right. A recycled industrial, often food-grade bucket is a lot cheaper and just as good! You'll also be able to repair it more easily as it wears.

If you'd like to learn more, the class, which includes materials, is just $25. Registration is necessary, so see here for more.

Then, on Saturday, February 6th, they're hosting a bicycle safety fair. 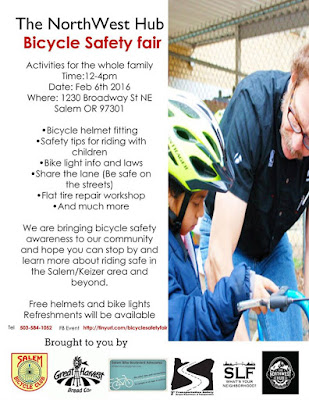 
The purpose of the event that The Northwest Hub is hosting. Is geared for the community to come together to learn and discuss bicycle safety in a safe space. We are partnering with a few community organizations and ODOT’s bicycle transportation and safety division. To put on a well rounded event that will cater to all levels and knowledge of bicycle safety and laws to the public. There will be an emphasis on providing the right information and bike lights to youth and underrepresented members of our community. The end goal of the event or long term effect is so that our community is more conscious of bicyclist on the road. While also those who drive be conscious about who is on the road as well. Safe and law abiding bicycling benefits everyone not only the bicyclist and the driver but the community as a whole.

We are reaching out to public schools and community centers in and around Salem and Keizer areas to attend this event.

Here is a breakdown of what the event will look like: The event will go from the twelve noon until four pm. In those four hours the organization that are partnering up with The Northwest Hub will be tabling (handing out information, answering questions and creating spaces where everyone will and should feel welcomed). While community organizations are tabling , there will be set times throughout the event where designated people will be facilitating a workshop on proper bike helmet fitting, flat tire repair, bike lights law and safety, and how to ride with children in the streets.

If you're already reading here, the event probably isn't really aimed at you. But perhaps you know someone who'd like to get started biking and would like a head start on fair weather in the spring.

Or, maybe more exactly matching the aim of the event, someone who is already biking, maybe dependent on bike transport, and who might be able to use additional legal and mechanical knowledge. (Since the best time to start biking really is in the fair weather so that you have time in the sun to build some habits that will carry you through the rain and cold, the timing on the event suggests it may be aimed more at people already biking rather than aimed at people who want to try biking for the first time.)

The Salem Bicycle Club and Salem Bike Boulevard Advocates will also be there.

Hopefully this can be the start of an on-going series of clinics!
Posted by Salem Breakfast on Bikes at 12:01 PM