At the Hearings Officer on Wednesday the 13th is the appeal on the gas station near Madrona and Commercial. (See previous discussion here and here.)

On the matters of the appeal itself, I suspect the Neighborhood Association making the appeal will have a difficult time. I don't see errors by City Staff - do you?

Within the framework of the existing regulations and process, the proposal seems licit and the outcome likely to affirm the Planning Administrator's decision.

But the framework itself has serious shortcomings.

At the highest level, the proposal amounts to demolishing existing mid-century cottage housing and a somewhat later office building and replacing them with a gas station.

That seems like it's a clear downgrade in land use, the kind of thing the regulatory environment should inhibit rather than allow or encourage.

It's also over a culverted creek that immediately runs through a City Park, and fuel and creeks seem like a very bad mix. Even with a "Stormwater Pollution Control Plan," which Public Works could require of the gas station, the baseline is an assumed level of pollution - which still might be unwise. It seems like we already have plenty of pollution from surface run-off with the parking lots and Commercial Street, and that risk of the concentrated kind of pollution from a fuel spill nearly directly into the creek and park is a classic "bad idea." Additionally, as we seek to transition the whole consumer and residential fleet to electric cars, why invest in gas now? Petroleum fuel just seems all wrong in this context.

Finally, it's in an area slated for improved crosswalks and medians, and all the turning movements for entry and exit for a gas station seems like a move in the wrong direction for Commercial Street safety and attractiveness.

So just at the summary, policy level, this project seems like it is a failure on multiple grounds.

But it probably meets the letter of the law.

The more interesting thing, then, is the way the Traffic Analysis is confined by the premises of hydraulic autoism and gives insufficient attention to users of the road other than drivers and their autos. This remains a great shortcoming in our policy and regulatory frameworks and is a structural contradiction with our interests in reducing drive-alone trips and in improving conditions for the traveling public not making drive-alone trips. If we truly want to reduce drive-alone trips and to reduce emissions, at this nuts-and-bolts level of planning decisions we should see the outcome and evidence - and we don't.

We see the disconnect best in the "median" that was analyzed. Rather than analyzing the pedestrian medians proposed in the Commmercial Vista Corridor Study, they analyzed the potential of a completely new and different median!

The Traffic Analysis included the claim that 38% of trips to a Fred Meyer gas station also included a stop at the main store.

That means a bunch of people will be trying to cross Commercial Street between the two parking lots, making a "driveway to driveway" crossing. 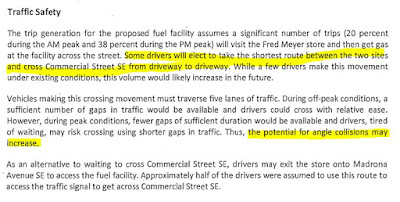 The discussion of this is rather vague, though, noting only "the potential for angle collisions may increase." Of course a meaningful subclass of these "angle collisions" are classic right- and left-hook collisions with people on foot or on bike. Instead, The main assessment is quantitative and on delay for auto travel, not on safety for all users:

Even in the evaluation of traffic with the proposed medians, it's still about delay. Additionally, the quantitative metric for safety, that the area falls below a "threshold rate of 1.0/mev," is in an important way non-sense.


The crash rate is expressed in terms of the number of crashes occuring per one million vehicles entering the intersection (MEV). As a general rule, when intersections have crash rates higher than 1.0 collisions/mev, additional analysis may be performed to identify specific crash patterns and evaluate the potential for safety improvements. All of the study crash rates fall below this threshold.

People on foot and on bike would not agree that this is a "safe" section of road or cluster of driveways and intersections. It feels perilous! While there were only 5 reported crashes involving people on foot or on bike during the window of 2009-2013, this certainly underreports the minor collisions, "close calls," speed, and proximity, that contribute more generally to a personal assessment of safety.

The Commercial-Vista Corridor study did a much better job of capturing this, it should be noted. (Still, relative to the car traffic modeling, analysis is not as sophisticated.)

Until Traffic Impact Analyses include a full multi-modal assessment, they will futher entrench hydraulic autoism and work in contrary ways to other planning projects and policy goals.

So here are the Traffic Impact Analysis conclusions, which only assess the road as a firehose for cars. 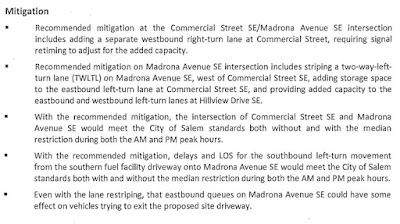 In total, the gas station proposal may meet the letter of the law, but it also violates the spirit of a lot of things.

The kerfuffle over bike parking at the Lord & Schryver museum also goes before the Hearings Officer on the 13th.

I'm not sure there's anything substantive to add to previous notes:
More than anything, the squabble shows bike parking as a second thought, an annoying detail, something in the way. The museum could feature it, see it as something consistent with the ecological and aesthetic values of the garden, as well as with its public park or recreation purpose, but they don't.

Cherriots and the Chamber 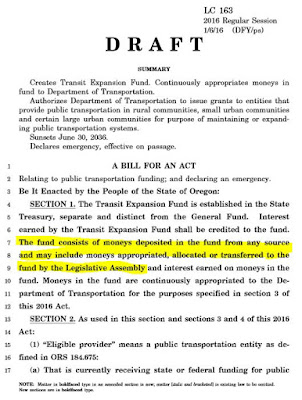 In the packet for a work session yesterday, Cherriots included a draft of the legislation being circulated by the Chamber of Commerce to fund transit expansion.

It creates a "Transit Expansion Fund," which "consists of moneys deposited in the fund from any source and may include moneys appropriated, allocated, or tranferred to the fund by the Legislative Assembly..."

You'll note that the proposal doesn't actually appropriate any money or identify any funding source.

So as I read this thing, it's Potemkin bill, designed to look like doing something, but designed not actually to do anything.

Indeed, it would be surprising for the Chamber to support new taxes to support transit in a more substantive way. At best this looks like a "zero sum" approach that calls for reallocating from some other funding source.

Maybe this will develop in more interesting ways, but at the moment it doesn't look like a very serious proposal.

(See below for note on edit.)
Posted by Salem Breakfast on Bikes at 12:01 PM

Edit: Deleted section on Hillcrest here and copied it into a different post on the Fairview Park.