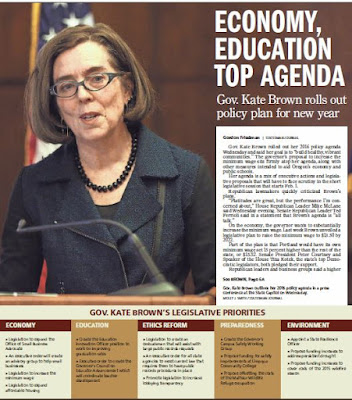 You'll probably have seen the story about the Governor's agenda for the short session of the Legislature this year, which kicks off on February 1st.

It's the E's I guess: Economy, Education, Ethics, Environment. And then a P for Preparedness thrown in.

But no T for Transportation.

Senate President Courtney and Speaker Kotek had already dismissed notions about a transportation package this year and pushed it off to the 2017 session, though Rep. Davis from Wilsonville has said he would introduce a smaller transportation bill that includes a four cent gas tax. But there hasn't been much talk or enthusiasm for this since.

There may be a few related odd-and-ends, though.

You may recall the transit bill the Chamber looks to nudge here and there, though how much passion they'll have for it remains a question. On Friday the paper had more on the concept, co-sponsored it turns out by Rep. Post (R-Keizer) and Rep Buckley (D-Ashland):


Post's bill would establish a way for transit authorities, like Salem-Keizer Area Public Transit, also known as Cherriots, to request funding grants. To qualify for a grant, a transit authority would have to serve an area with a population less than 200,000, or refrain from levying employer taxes. It also would need to specify how the grant would be used and what benefits it would create to receive and keep grant money.

Something that jumps out here - and didn't earlier - is a matter of tone: It seems like the concept approaches transit agencies from a baseline position of distrust, like they are engaged in misbehaving and have to be monitored closely. There's something patronizing about this bill perhaps. (The paper also declined to point out that there was no money attached to the bill.)

The other concept is from Senator Courtney, but it doesn't seem to apply to Cherriots at all. "Courtney's bill would allow transit districts funded by employer payroll taxes to add an employee tax." In excluding them, he doesn't seem to be rooting for the home team. This is hard to understand. Hopefully more will come out about it.

Our whole approach to transit just seems strange and even dysfunctional.

Salem Weekly came out with a strong endorsement of the carbon cap-and-trade concept Senator Edwards talked about late last year. (But the Governor under her E-for-Environment heading doesn't seem also to share enthusiasm for cap-and-trade.)

There also seems to be some interest in a deal to make inclusionary zoning legal.

Maybe there's a few other things, but I just haven't seen that much chatter about things of direct interest here, and there may not be much here to follow in the session.

Draft bills don't seem to be in the database yet, so more things might emerge when keyword searches are possible, however.

Do you know of any other transportation and urban land-use issues that have realistic prospects this session?
Posted by Salem Breakfast on Bikes at 10:30 AM

We have a bill!

Those are the ones that jumped out immediately.

Willamette Week has a note about a case made at City Observatory against inclusionary zoning.

City Observatory's most enthusiastic recommendation? "If we want to make housing more affordable, let’s get rid of parking requirements."

It's worth a read.

A lot of the tesimony was in favor. Cherriots was there, for example.

Significantly, ODOT also testified and they were dubious:

"HB 4078 requires ODOT to set up the new program, despite no dollars being allocated to the newly established fund. ODOT recommends the legislature consider delaying the implementation of the program until dollars are allocated."

BikePortland has a story on SB 1553, which contains a section about the "negligence gap" when motorists hit and hurt or kill vulnerable users. It may not be very broad, however, as "Underhill estimates the law would only trigger for a total of about 15-16 cases statewide per year."

"HB 4078 ... is now dead in committee. I had hoped to find a way to responsibly fund transit districts like Salem-Keizer by not raising taxes and incentivizing districts to be more responsible and accountable. The chair, Rep. Caddy McKeown informed me on Friday of last week that there was no funding available from the co chairs of Ways and Means. I was very grateful that she took the time to tell me in person and appreciate the work she did to move it forward to a hearing. Sadly, I will not be able to keep my promise to help those who want stable transit funding in Keizer and other smaller communities."

It is significant that there was indeed a punitive component here as if transit was routinely "irresponsible." It also was a zero-sum game by "not raising [new] taxes" for transit and instead taking the funding from some other worthy project or aim.