Several interesting things appear at the year's first full meeting of the Policy Committee for our local MPO, SKATS, which meets next Tuesday the 26th.

There's not much in the way of decisions to make or "action items," but the documents (it's a big packet, 106pp.) show much about our current values and the policy and funding choices resulting from them.

The Intersection of Autoism and Denialism

At the top of the agenda, and looking back to 2015 for a moment, in the minutes for the October meeting they selected a representative to sit on the Greenhouse Gas Target Rule Advisory Committee for the State. SKATS operates by a "consensus" model and generally arranges things so that all votes are unanimous or at least are "unanimous." So the maneuvering and then explicit split vote here is rare and at least a little revealing:


Commissioner Sam Brentano volunteered to be the SKATS nominee for the DLCD GHG Target Rule Advisory Committee. Mayor Anna Peterson supported Commissioner Brentano's candidacy for the PC representative. She believes that MPO technical staff will likely attend the meetings even if they aren't there in an official capacity. Commissioner Brentano commented that he is not opposed to having technical staff available as long as it would not negate his position. [on which see just below]

Chair Cathy Clark commented that a lot of the greenhouse gas emissions reduction work that needs to be done is the same work needed on the streets, sidewalks, and bikelanes.

Commission Brentano commented that it is his goal to make traveling from point A to point B as easy and safe as possible. Chair Clark commented that she favors high quality service for all modes so that individuals have good choices available to them. Due to economic disparity, if a person has the means, they have choices not available to those with less resources. She favors GHG emissions reduction efforts if it comes with the funding for the infrastructure to achieve it.

Committee members discussed finite resources. Mayor Peterson noted that sometimes trying to do everything equally doesn't have the best results. Roads that are in bad repair impact commerce. A strong economy lifts everyone up. She believes that staff will likely attend the meetings. She disapproves of providing DLCD the opportunity to choose a single representative which could translate to a staff person rather than an elected person representing the SKATS area. Mayor Tiffin expressed concern about nominating two candidates to DLCD. SKATS staff can act in an advisory capacity to an elected official....

The amended motion to submit Commissioner Sam Brentano for consideration by LCDC as the elected official to represent the SKATS MPO on the GHG Target Rule Advisory Committee and to include forwarding Mike Jaffe for DLCD to consider as a technical representative passed with four votes for the amended motion, three against the amended motion, and one abstention.

Commissioner Brentano is on record previously expressing "disapproval of performing an assessment [of greenhouse gas emissions]," believing it would be "used to the MPO's detriment..."

And back in February he suggested "he believes that the impacts of greenhouse gas emissions is based on faulty information" and disbelieved "that efforts in Marion and Polk County to reduce emissions over time would have a significant impact on global emissions."

Assessing the Proportion of Bike/Ped Spending

The report on Federal funds actually spent, the "Obligation Report," is always interesting to see. 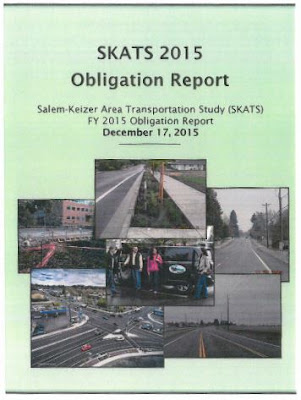 Did we really spend more than 10% of Federal funds on actual bike/ped stuff??? 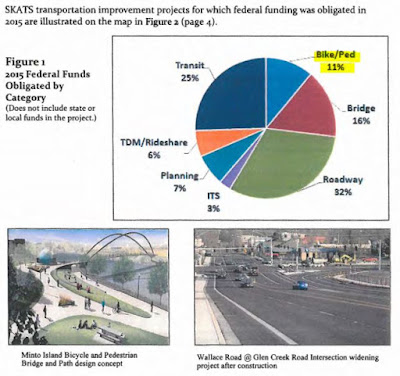 That's just under $2 million, apparently, out of a total of about $14.5 million. Three projects, much of them to retrofit rather than improve sidewalks and bike lanes, one on Brown Road NE, one on Chemawa Road NE, and one on Delaney Road in Turner, made for the bulk of the $2 million.

Also included in it are some additional funding adjustments on the Minto bridge and a couple of other projects, but the main obligation of funds already occurred. These are small amounts, though, mostly "rounding errors."

(You'll note that the report is pleasantly larded a bit with a couple of pictures of the Minto bridge! Also note that the 16% in the pie chart for "Bridge" work is mostly the Winter Street Bridge replacement over Shelton Ditch; it's not for the Salem River Crossing.)

The Chemawa project shows some of the factors over which to quibble. 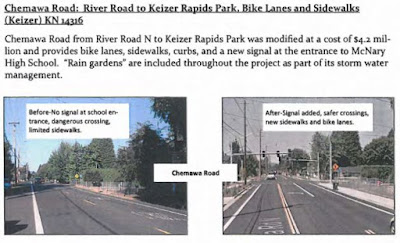 It's a little like going to a restaurant and having to order the steak because that's the only way to get your favorite asparagus dish. But you didn't really want the steak, and so the "cost" to you of the asparagus is the cost of the whole steak entree. That's how we tally up a lot of bike/ped projects.

Back to Chemawa (side-by-side image above), with the center turn pocket at the High School, Chemawa here is wider, though the lanes may be narrower, and the speed is still signed for 30mph. Even at the dead end for a park, it's signed for 30mph.

Even apart from the question of apportioning asphalt for cars vs. asphalt for bikes, how much is this really a bike/ped project? Does it structurally help people on foot and on bike, or does it merely add a veneer to a very autoist project?

On a continuation of the Chemewa project, last year a driver struck and killed James Alton as he was trying to cross the street.

It may be that without additional calming and slowing, retrofitting to 1980s standards of sidewalks and bike lanes is not sufficient.

Overall, the way we tally up bike/ped project spending seems like it's padded in order to seem more impressive than it actually is.

On the agenda is also formal adoption of three projects for additional funding with a little over $1 million in extra funds. These came from the short-term extension of MAP-21. (MAP-21 has now been replaced by new legislation, the FAST Act, on which see below.)

An enlargement and adjustment of the intersection at Lancaster and Macleay is the main thing. (Some previous discussion of it in comments here.)Two other projects are for Information Technology.

Last month the Feds passed a new transportation bill, the FAST Act, and in addition to the one-time extra that will do those three projects, there is an on-going bonus for us. Having assumed the decline of the Highway Trust Fund, SKATS staff projected for significant reduction in funding over the 2015-2020 TIP cycle. With the FAST Act passage, about $1.4 million a year gets to be added back. Staff are working on ways to split it between the 2015-2020 TIP and the 2018-2023 TIP just beginning and planned for adoption in the spring of 2017.

This will be something to watch.

Other than that, details on the FAST Act don't seem very relevant here. As you can tell by the name, it's still dominated by hydraulic autoism.

The Policy Committee will also see the draft of the Work Plan discussed at the TAC earlier this month.

This is an outrageous decision by local elected officials to nominate a climate change denier to a state committee setting targets for greenhouse gas reduction targets in the state. The law is already in place to reduce greenhouse gas pollution to 75% below 1990 levels by 2040. What good would do to have a "denier" sitting on this implementation committee? There is nothing useful that he can contribute. I hope DLCD rejects the SKATS nomination of Commissioner Brentano.

Learned this week that those nifty flashing pedestrian light arrangements, like the ones between South Block Apts to City Hall and across State at the Capitol, cost $25K to $30K, so maybe we are spending 10%. Still, it doesn't seem quite the thing to claim credit for improving bike/peds access if all you're doing is installing death prevention devices like these.

Someone at our neighborhood association meeting commented that pedestrians are a traffic calming device.