Well, the City's got some new narrative mapping toys from ESRI, and they've put together a feature on the redevelopment of the Riverfront.


For many years, the City of Salem and Salem's Urban Renewal Agency have been working to reconnect downtown Salem with the Willamette River. This work began in 1975 by establishing an Urban Renewal Area (URA) to provide a dedicated funding source, clear goals, and objectives. This work to create a connection continues today.

It's interesting, but at least from here seems like it is still too much oriented towards folks who already have an interest in urban renewal. If it is meant to be popular, it may not be written broadly enough for a general audience. But if it is meant for those who, say, are already active in neighborhood associations and some familiarity with City policy and policy-making, it's likely much more useful.

It is also possible to draw different or even counter-narratives from it.

One of the most suggestive features is an overlay of a 1961 downtown aerial map with a circa 2014 (pre-Howard Hall demolition) aerial map.

(There doesn't seem to be a way to link to an internal chapter heading. So you'd navigate to it by the sixth button/chapter on the far right-hand scrolling set-up.) 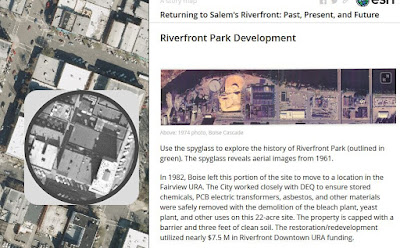 From here it's much more interesting to look at the mostly intact urban fabric of 1961 - though there have already been some demolitions and surface parking - and to see the way fire and demolition have created our lattice of parking craters, the erosion of surface parking lots that suck the life of the city. 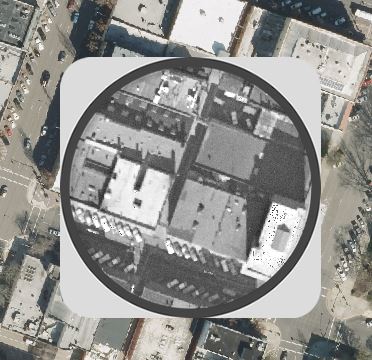 Shifting the "spyglass" north a bit, you can see the current expanse of surface parking lots. 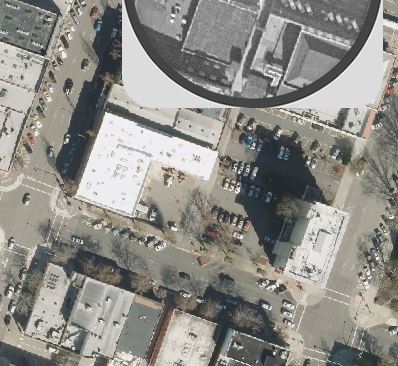 This is an easy way to look at all the parking lots downtown and to see the basic forms of buildings that preceded them.


The 1961 aerial goes down partway through Bush Park, so you can see other instances of clearing houses for parking or commercial development. The State Agriculture building is bisected on the eastern edge of the 1961 aerial, which approximates 12th street.

You might find some other interesting things to examine.

Earlier in the narrative there's a classic expression of our fondness for "ornamental emptiness."

Oh, the fall colors and saturation is pretty - but there are no people! It's barren emptiness.

We like to structure our public spaces so they look pretty and are available in theory for people to enjoy, but we do not also structure business, residences, and low-traffic streets with meaningful adjacency so people actually find the spaces inviting and easy to reach. They are more ornamental than functional. Here there's OR-22 on one side and the 9-5 weekday hours of the SAIF campus on the other. A hidden stucture of car-orientation is coded into our ostensibly walkable public spaces.

As it argues for the general value of urban renewal, the larger narrative does not account for ways that the Pringle Creek Urban Renewal District was not a success.

The whole thing is worth a look. Even if the story the City is telling in it does not command 100% assent, it is nonetheless fertile, and there are other stories to tell with the material!
Posted by Salem Breakfast on Bikes at 12:01 PM

About the SAIF building remodel they say, "The total cost of the project is estimated to be $110 million, with the cost of the main building renovation to be amortized over a 50-year period."

So an interesting question might be whether some of this cost ought to be "charged" to the cost of the Pringle Creek Urban Renewal Area.

Isn't the massiveness of this rehab additional evidence that the "bulldoze and brutalism" approach of that urban renewal district was not a success, at least in terms of creating an excess of value over the value of "doing nothing" and allowing a "natural" rate of incremental change?

I have always been puzzled about why the Bligh Building was never replaced. Seems to me to have been a prime location for shops. There must be a story there somewhere. Perhaps someone knows.

When I was a child, I was good friends with the Heuy's that managed the old hotel/residential rooms. Donna and I learned hot to cook at the hands of her mother who was our 4-H leader. Interesting experience going into that building with all the segmented warren-like rooms, some of which had been turned into 25-cent-a-night sleeping rooms.