De-bricking the Brick: More Restoration at the Gray Building

I don't know if there's actually a rivalry now, but with the restoration of the McGilchrist and Roth building on the northeast corner of Liberty and State, the overbearing awning and ahistorical brick work on the Gray Building of 1891 on the northwest corner is looking increasingly dowdy. (If there is a little competition, who wants to argue?!)

So it's great to see the Hearing Notice for what looks like a de-bricking of The Brick! 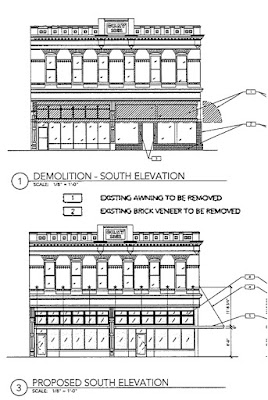 It's not a huge deal, but every time I look at it, that brick veneer on the corner and running along the lower wall where it meets the sidewalk is such a jarring moment against the small splendor of the older building. It's just wrong. A refresh and reset of the building facade will make a perceptible difference on the mood at that corner.

The demolition and restoration requires a "Major Historic Design Review" at the Historic Landmarks Commission. They'll be meeting the 19th about this.

On the surface, it sure looks like a slam-dunk, and hopefully there will be no complications.

(But then you have to wonder if The Brick restaurant and bar is also going get an update?)

As a footnote, it should also be noted that in the Hearing Notice, there are two historic photos. The reproduction in the Notice isn't very good, but one of them shows people biking downtown and again shows the mixed transportation ecosystem and lively sidewalks we used to have.

Now if a project would surface for the building situated on the NE corner of Ferry and Liberty. Call me greedy, but I'm loving these old building redos.

The Brick restaurant and bar is closing December 30th, says the SJ. The "de-bricking" as you say, will be complete.