The Historic Landmarks Commission meets tonight, Thursday the 19th, and there's some awards, the new storefront for the Gray Block, as well as a discussion of the North Campus of the State Hospital. 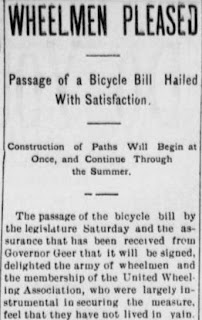 A couple of days ago, State Archives posted a picture of one of the pages in the Bicycle Tax register of Yamhill County from 1899.

This, Oregon's first Bicycle Bill, was supposed to fund a system of dedicated sidepaths along County roads.

It was a bust.

Marion County surveyed 10 routes, started construction on a few of them, but abandoned things quickly after payment, compliance, and collection all were problems. As with projects today, initial construction wasn't the hard part, but subsequent maintenance a great problem. The dirt and gravel paths deteriorated quickly.

The Oregon Supreme Court decided the tax was unconstitutional in 1901, and a licensing scheme followed as a thinly transformed replacement. It fared no better.

Portland and Multnomah County managed a little longer than less urban areas, but by 1906 the paths were largely abandoned there too.

The story is more than a footnote, but less than a full satisfying story. Maybe it's a Beckettian story of initial optmism, enthusiasm and churn, and then waiting, dwindling, and emptiness. It's very modernist, actually. The bicycling itself wasn't a fad, and it continued, but the path effort with a distinct rise and fall was something of a fad.

The paths are still not accounted for in our official transportation histories, and they should be. At the same time, they did not bear enduring fruit and in aggregate does not present some kind of positive model that we can retrieve and emulate now. It deserves more honor and attention, but it must be reckoned a noble failure.


Annual Awards at the HLC

You may recall the Hearing Notice for "de-bricking The Brick." The Staff Report is short and recommends straight-up approval.

The picture also shows signage for "Gray lofts," and second story housing here would be terrific.

All in all this looks great!

North Campus of the State Hospital

So. Here's the interesting part of the meeting. (Still here?)


During the 2015 regular session, the Oregon State Legislature directed the Department of Administrative Services (DAS) to demolish 4 main buildings and 1 minor building on the North Campus...DAS has chosen to take advantage of [Salem's streamlined alternative historic review process]...and is currently completing their historic clearance review with the Oregon SHPO [State Historic Preservation Office]. Part of this process includes developing a proposed mitigation plan....The HLC [Historic Landmarks Commission] has been asked to review and provide comments on the proposed mitigation plan and forward it on to City Council for signature.

Most of the other buildings are sited poorly, are unattractive, and have other problems. Sure, it would be nice to repurpose them, but we're really not going to miss them. Really.

One of them, Breitenbush Hall, has a distinguished pedigree, however, having been designed by Pietro Belluschi, Oregon's most important architect, and it will be a shame to lose it.

It is important to remember that we lost one of his buildings in 2013, and another is very much at risk downtown.

The number of his buildings is dwindling. The ones in italics are probably going to be demolished.

The proposed mitigation plan for the north campus is written in the framework of State Institutions, patients, and their history. Apart from the photographic documentation, the plan is not written to account for the significance of any of the architects and building forms.
I don't know what is in the universe of the possible here, but is there some way to allocate resources to the preservation of a different Belluschi building?

We saw a variation of this problem on the Winter Street Bridge replacement at Shelton Ditch. Instead of memorializing a very minor bridge with some signage and such, why didn't we shift mitigation resources to investing in and preserving the much more significant Church Street Bridge?

It seems like we ought to be able to sell special "demolition permits" for historic resources and then turn around and apply those funds to other, difficult preservation projects that need help. If we could monetize demolition better, there would be pricing signals for it, so people and institutions wouldn't undertake it so lightly, and there would also be a source of revenue for actual preservation projects.

I don't know. But it seems like in the mitigation plan there should be more thought given to architectural history in addition to the institutional history.
Posted by Salem Breakfast on Bikes at 7:00 AM

SBOB, I hope you will pull the last bit up into a main post, it's a very thoughtful and creative idea that has a ton of merit. I think it sometimes happens informally through the horse trading of back room politics that dominates in development deals, but having the system be formalized and available for intervenors to propose (and oversee) would be excellent.