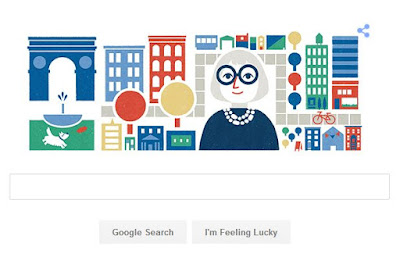 In so many ways we work in her shadow and in the light she also cast. In her opposition to Robert Moses and his plans for Manhattan expressways she is our patron saint in opposing the Salem River Crossing. Her thought is involved in the creation and institutionalization of neighborhood associations and in the modern planning profession.

Lots of news and commentary sites devoted one or more articles to covering her and her legacy (and some criticism, too). Hopefully you saw some of it. If not, she's definitely worth some research and reading. Her legacy and thought is far from being fully absorbed: It's a blend of conservatism and progressivism with an important element of libertarianism, and the whole evades easy categorization. It is rich, but too often gets stripped down and flattened out, even co-opted. City planners who today tout mixed-use developments might also elide the fact she was skeptical of top-down and master planning initiatives.

She will not be boxed in by our tired cliches!


[Public sidewalks] bring together people who do not know each other in an intimate, private social fashion and in most cases do not care to know each other in that fashion...if interesting, useful, and significant contacts among the people of cities are confined to aquaintenceships suitable for private life, the city becomes stultified. Cities are full of people with whom, from your viewpoint, or mine...a certain degree of contact is useful or enjoyable; but you do not want them in your hair. And they do not want you in theirs either. 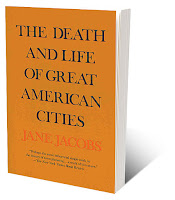 The tolerance, the room for great differences among neighbors - differences that often go far deeper than differences in color - which are possible and normal in intensely urban life, but which are so foreign to suburbs and pseudo-suburbs, are possible and normal only when streets of great cities have built-in equipment allowing strangers to dwell in peace together on civilized but essentially dignified and reserved terms...Lowly, unpurposeful and random as they may appear, sidewalk contacts are the small change from which a city's weath of public life may grow....

A well-used city street is apt to be a safe street. A deserted street is apt to be unsafe....there must be a clear demarcation between what is public space and what is private space....Second, there must be eyes upon the street, eyes belonging to those we might call the natural proprietors of the street....And third, the sidewalk must have users on it fairly continuously, both to add to the number of effective eyes on the street and to induce the people in buildings along the street to watch the sidewalks in sufficient numbers.

Minutes from February Cherriots Board 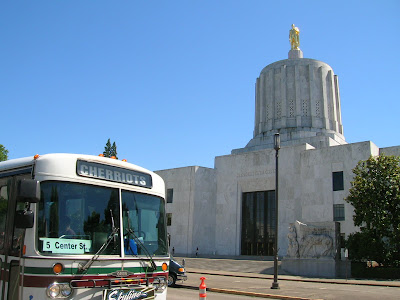 Back in February the Cherriots Board met for a retreat, and the discussion looks like it was very interesting. The minutes are worth reading in full.

But here's some highlights and - maybe some new pragmatism and skepticism!
New Life for CATC?

Lately one of the themes in criticism of Salem governance has been that we need more citizen involvement and and need more advisory committees. We have been skeptical of this here because it has seemed like the existing advisory committees and boards have struggled with full membership. If I have counted right, we have 38 vacancies right now on 14 different committees. If we can't fill the ones we have, what use is served by creating more underfilled committees?

One of the committees that has seemed terribly underutilized is the Citizen Advisory Traffic Commission. It doesn't meet very often, and it seems like it is used more to adjudicate over parking squabbles than to advise the City on traffic planning and more substantive matters.

So it was great to see this week that they would be getting a presentation on the Downtown Mobility Study.

Even as a set of recommendations weaker than we would like to have seen here, it deserves a much more speedy implementation. A quarter century is too long a wait!

Getting them involved and thinking more about bigger planning issues is a great idea. Maybe this will be the start of an invigorated board.

Remember the abduction story from Monday in West Salem? It's been updated by the PD:


Update 05/05/16: The 9-year old child was re-interviewed today by his School Resource Officer and recanted his story, saying he had runaway because he did not wish to go to school.

Salem Police officers are investigating an incident where a 9-year old child reported that he was approached and grabbed by an unknown male.

The child was walking from his residence to a bus stop near the intersection of Stellars Eagle St NW and Bald Eagle NW at about 8:30 am this morning when he was approached by an unknown male adult who grabbed his arm. The child was able to pull away from the suspect, who then pushed the child to the ground. The child was able to get up and run away as the suspect followed in his vehicle. The child was eventually located walking along Highway 22 by an Oregon State Police trooper. The child sustained a scrape to his arm and was transported to Salem Health for evaluation.

The suspect in this case is described as a white male adult in his thirties with blue eyes and wearing a Boston Red Sox baseball cap. He was driving an old black and rusted vehicle that squealed when he drove.

The Salem Police Department would like to remind parents to have conversations with their children about "stranger danger." Younger children should be in the company of a responsible adult whenever possible. When not under the supervision of an adult, children should stay in groups and be aware of their surroundings. If they feel uncomfortable about their surroundings or people around them, they should immediately leave and contact a responsible adult. If approached by a stranger, children should not talk to them, accept rides or anything else from them and should immediately leave and report the incident to an adult. Likewise, all of us should be aware of our surroundings and watch for suspicious activities and immediately report those activities to law enforcement. When preparing to report suspicious circumstances, callers should note the type of activity, descriptions of all involved, any vehicle descriptions such as make, color and license plate, and any direction of travel if the subject has left the area.

Car danger is way, way, way more of a threat to kids than "stranger danger."
Posted by Salem Breakfast on Bikes at 12:01 PM