Governor Talks past Salem for #BiketoWorkDay on Social Media 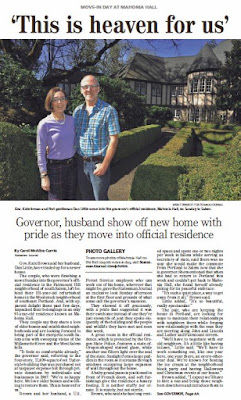 After a period when Salem seemed spurned as a home for the Governor, a year ago in March Governor Brown made a pleasant fuss about living in Mahonia Hall.

And it has seemed that, as much as is possible for a person with statewide duties, she has consistently acted as if Salem was actually a home. People routinely report seeing her in banal, ordinary hometown activity.

So it was interesting - though not really very surprising - that her remarks today on Bike to Work Day talked past Salem and instead seemed to address primarily a Portland audience.

She tweeted out a link to bike counts on the Hawthorne Bridge and showed scenes from somewhere that is not Salem and seems certain to be in Portland. (Do you recognize the location or event?)

You can't really fault Governor Brown here. She's got an election coming up, and there are lots of reasons why a politician might want to speak to Portland more than to Salem. That's where the bikey audience really is, and where key voters are. But still...

This year the City's primary activity seemed to be the Proclamation on "Traffic Safety Week." 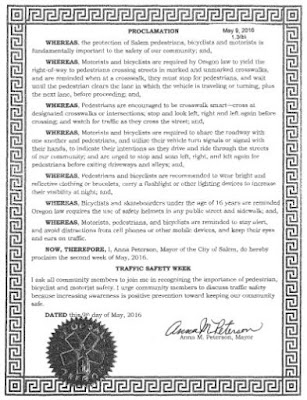 Looking to next year, and with a new group of City Councilors who, even if they do not personally bike all the time, are at least sincerely interested creating more real options for traveling citizens, is the City at all interested in officially structuring and supporting Bike to Work Day next year in such a way that Governor Brown can't ignore activities in Salem?

(If we elect Governor Pierce, his statements on transportation have already seemed so highway-centric, that it seems unlikely Bike to Work Day would be at all significant for him. It seemed pointless to write this in a neutral, agnostic way. A draft of it was risible!)

A Different Take on Bike to Work

There wasn't a whole lot of Salem #BiketoWorkDay stuff, but this picture today from the Broadway Coffeehouse bike trailer at Waterplace was pretty great!

Even if it wasn't the "conventional" bike to work commute, it was a bike to another's workplace! (More here.)

(I want to know, though, how this worked with the one-way couplet on Commercial/Liberty. The bike lanes make left-turns exceedingly difficult and this is an instance where our system practically enforces some amount of sidewalk biking.)
Posted by Salem Breakfast on Bikes at 1:00 PM

I can criticize the Governor for consistently pushing highway construction while simultaneously talking about climate change. As we saw in the Vision that just came out, if taking cars is not the first funded priority, then it becomes just flowery talk.

I think the photo of Brown is from the kickoff event for the "7 Bikes for 7 Wonders" promotion Travel Oregon put on last year.

Huh. Not that it's a terrible or random choice, but it's a choice even more disconnected from the particulars of "bike to work day" and maybe a little autoist after all. Thanks for the info.

The route from Broadway Commons/Highland/Grant to South Downtown is a bit circuitous, but a good ride on Church Street right up until the hill. At that point, you can go up the hill on Church and back down on Liberty. Or cut across at the post office, under the Pringle Parkade and "walk your bike" up the last few steps to Waterplace. So – I guess I’m avoiding the question by avoiding Commercial/Liberty.