Council meets on Monday, and the first public announcement about one of this year's TGM grant applications leads the agenda here.

But first, we had an election! A second ratifying vote is necessary in November, and new Councilors won't be sworn in until January, but as you already know some significant change is on the horizon. As N3B and Councilor Andersen have already written, there is now a substantial bloc of 4 votes for a more rational and truly balanced transportation policy here, and it seems very possible that in that group Mayor-elect Bennett will find congenial company sometimes, perhaps even often, yielding some 5-4 votes (or better!) for more transportation options in Salem. This in turn may have upstream influence on how our MPO, SKATS, and our local area commission on transportation, MWACT, approach some topics and decisions and allocations of federal and state funding.

(At the same time, we may find ourselves with Mayor-elect Bennett acting like Justice Kennedy on the Supreme Court, where all argument is effectively tailored to him, and he alone becomes the main decider on 5-4 splits. Something to watch.)

And second, a housekeeping detail. We have a new format for Staff Reports! 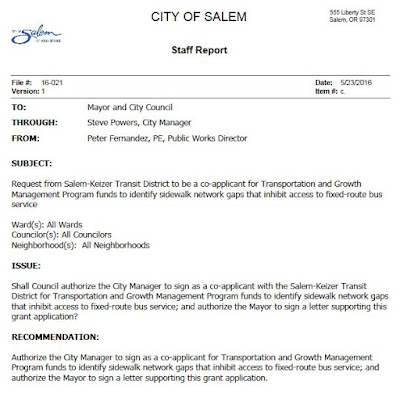 Looks like it's generated from new software with automated fields or something. For us, it's more legible, and it will be interesting to see if it makes any additional improvements on the user/citizen experience.

So Cherriots wants the City's participation on a TGM grant application to support analysis of sidewalk gaps on and near key transit corridors.


Oregon’s Transportation and Growth Management Program (TGM) is a partnership between the Oregon Department of Transportation (ODOT) and the Oregon Department of Land Conservation and Development (DLCD). Through planning assistance, the program helps Oregon communities create vibrant, livable places where people can walk, bike, take transit or drive where they want to go. [2013-2015 Biennial Report]

What's not to like about better sidewalks connecting with transit?

Current TGM grant funded projects in Salem include:
And scads of others in the past.

Salem has historically submitted solid grant proposals and been generally successful winning funding for the studies.

Final grant applications are due June 10th. It will be interesting to learn what the City applies for. (TGM site here.)

This is interesting for two reasons. First, the Red Lot is the origin and end for most of the Salem Bicycle Club's rides, and area bicyclists will be intimately familiar with its asphalt expanse.

More importantly, this is a striking expanse of nearly treeless wasteland, and if there's not going to be more building on it, it would be nice to have more trees on it. The reduction in required landscaping is curious. So that'll be interesting to follow.

In some code clean-up and housekeeping, the City wants to mend a gap regarding duplexes in commercial zones:


While there are ways to allow multiple family residential use of three units or more and existing single family dwellings under these various code provisions, there is currently no provision addressing existing two family residential uses....duplexes that are destroyed may not be rebuilt. This makes it difficult to provide mortgage financing for these existing duplexes and provide for their ongoing upkeep.

Because of our sort-and-separate approach to zoning, this is a problem. With a form-based code approach that focuses on what buildings look like rather than what activities we conduct in them, this would be less of a problem. (See here and here, for example.) The two other pieces in this clean-up, for a dance studio and for self-storage in the lower level of GrossOut, are also consequences of our sort-and-separate approach.

As we think about siting things, homes and businesses, with greater adjacency and walkable connectivity in less car-dependent patterns, we will need to think through more deeply our commitment to sort-and-separate.

(The current item is a "future report," amusingly titled "Proposed Amendments to the Salem Revised Code to allow physical fitness," as if fitness was currently illegal. And in a way it is, since our code remains so relentlessly car-dependent and car-oriented! A truly walkable city order and code would look very different in many ways. The matter will appear formally for first reading on June 6th.)

The City's working out a longer-term lease deal with a food cart on some surplus land in exchange for the lessee taking on some improvements. That sounds like a nice thing!

There's a request to modernize our approach to short-term rentals - the Airbonb problem. That will be important and it seems like that's a more pressing matter than revisiting the Uber problem of the alt-taxi sector.

The local Marijuana Tax to appear on the November ballot is apparently only going to fund Police rather than go to the general fund. That's an interesting move.

And finally, the Public Art Commission wants to draw a firm line between art that is donated or otherwise comes to the City and art that the Public Art Commission formally "accept[s] into the City’s public art collection...." The Commission wants to "reduce its scope" to only those pieces it has "accepted," not those pieces it might have inherited or might find itself inheriting in the future. It seems like there might be a little bit of snobbery lurking here. Perhaps I am wrong to be a little suspicious of this, but it seems like it might put the accent on "art" at the expense of the "public" part. Too much gate-keeping maybe.

(And, please, no unkind comments about any of the candidates, winning or losing, for Council or Mayor! The election was sometimes bitterly contested, and it will be nice just to celebrate positive prospects for transportation.)
Posted by Salem Breakfast on Bikes at 7:00 AM