The Oregon Transportation Commission meets tomorrow, Thursday the 19th, and there's lots of relevant matter on the agenda.

The OTC is a little like ODOT's board of directors. At the same time, as we saw with Catherine Mater's removal not so long ago, its real purpose seems to be to rubber-stamp, and not to exercise independent judgement and oversight.

So it's not exactly clear always what to say about it or how best to try to lobby or advocate for change. In some ways its purpose seems to be to mystify power in order that the real source of it can remain concealed! 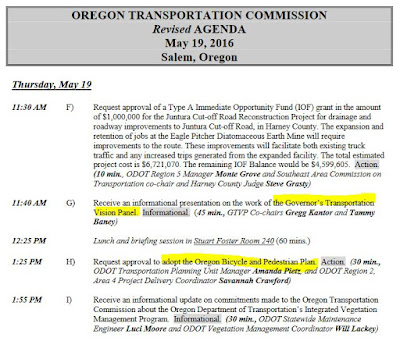 Still, on the agenda are three items of interest here:
The Bike-Ped plan is the most directly relevant, but we've already said plenty on it. This image from the executive summary seems to capture its essence: 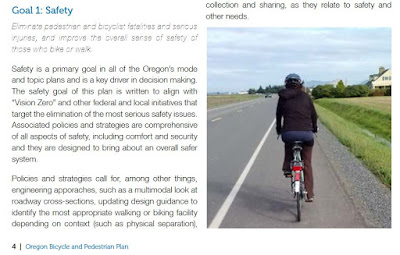 The person is riding in street clothes like a commuter or errand-runner, they're not all spandexxed-up with a road bike. They aren't dressed like a traffic cone in high-viz and they shouldn't have to be. It's a little more inclusive this way.

But they're on what looks like a two-lane rural highway with a standard 1980s bike lane, still very subject to zoomy car traffic. As illustrating "safety" it's limited; as illustrating comfort for "interested but concerned" cyclists it's even more limited.

It seems to me, though, that the image fairly accurately represents where the plan is - and is not.

The Oregon Bicycle and Pedestrian Advisory Committee submitted a further letter on next steps. 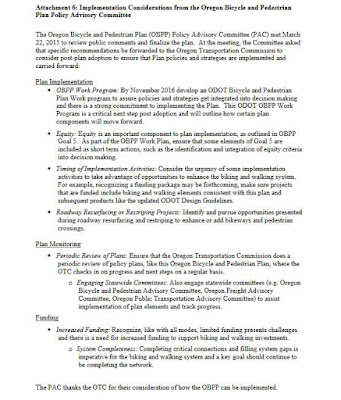 In the letter they ask ODOT and the OTC to:
The Plan is short on concrete details and actions to accomplish its goals, and lacks many qualities that would seem to position it best for strong success. It would be an overstatement to say it's being set up for failure, but it's positioned at the moment for only a kind of very tepid and limited success, more rhetorical perhaps than actual. 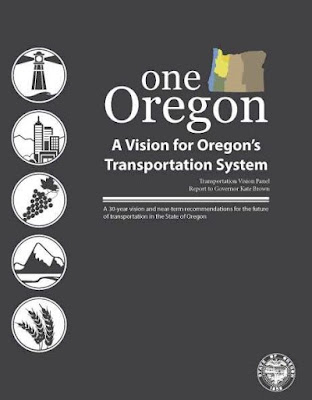 The report from the Governor's Transportation Vision Panel might merit a separate post. Over at SCV (the post seems to be gone now) one long-time ODOT veteran said merely that it looked like it could have been written 20 years ago.

That lack of forward vision is of a piece with the Bicycle and Pedestrian Plan - there's a pattern here! 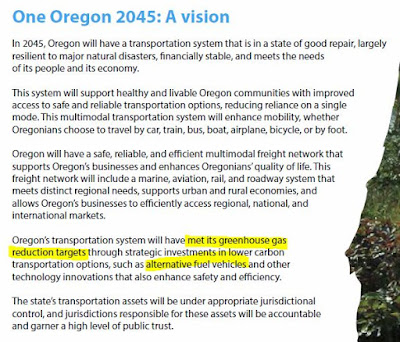 In fact, after a bunch of fancy graphics that amount to padding, the core of the "vision" says it all: "alternative fuel vehicles" is the center of its vision for greenhouse gas reduction. But no amount of alternative fuel will get us there if we don't also dramatically reduce miles traveled by car. The "vision" remains intensely autoist, bound still by dreams of the 20th century.

Finally, MWACT is meeting with the OTC formally at the meeting and informally afterwards at Bentley's.

In their letter they list priorities - very highway and rural oriented autoism:
(With changes to our City Council in January, it may be that we can also shift some of the emphases at the level of MPO and regional ACT!)

This was in the paper today from the Daily Astorian:

"Taking a page from the Obama administration, which talks a good game on openness but actually suppresses the free flow of information, Gov. Kate Brown takes the position that a majority of the Oregon Transportation Commission can meet privately as part of a planning committee without any notice. As Hillary Borrud of our Capital Bureau reported, the planning group — appointed by Oregon Transportation Commission Chairwoman Tammy Baney — is discussing what issues a contractor should examine as part of a review of the Department of Transportation."

Something to file away...

"SALEM – The Oregon Transportation Commission last week adopted the Oregon Bicycle and Pedestrian Plan, an important document that creates a framework for making decisions about bicycle and pedestrian facilities and programs throughout the state. Although it does not list specific projects or design requirements, the plan does identify biking and walking needs and opportunities, with policies and strategies for achieving a connected, safe and efficient network today and into the future.

The plan was developed over the past two years with extensive stakeholder and public engagement, including advisory committees made up of stakeholders from around the state representing the active transportation community, businesses, non-profits, local governments and other organizations. The newly adopted plan will replace the 1995 version, with a much more extensive policy framework. The adopted plan becomes a modal element of the Oregon Transportation Plan, the state’s long-range planning document. This raises the prominence and importance of biking and walking travel options with other modes and topics, requiring explicit consideration and integration of biking and walking needs into transportation decisions across Oregon. Next up is implementation of the plan.

"We will be taking the hard work people put into this plan and putting it into practice,” said ODOT’s Transportation Planning Unit Manager Amanda Pietz. “Several of the policies will immediately guide decision-making, while others will result in specific deliverables, such as updated design guidelines.”"