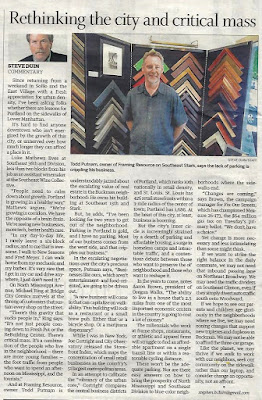 Did you see Steve Duin's column today in the Oregonian or over the weekend online?


Yet change is more necessary and less intimidating than some might think.

If we want to strike the right balance in the daily commute, we may not need that inbound passing lane on Northeast Broadway. We may need the traffic dividers on Southeast Clinton, even if they simply divert auto traffic a block or two south onto Woodward.

If we hope to see our parents and children age gloriously in the neighborhoods where we live, we may need zoning changes that support new triplexes and duplexes in Buckman. We may not be able to afford the three-car garage.

Like the planet, we may thrive if we walk to work with our neighbors, seek our community on the sidewalk rather than our laptop, and consider change an opportunity, not an affront.

It was a measured take on city and transportation change, and Duin's writing itself is always a great pleasure. 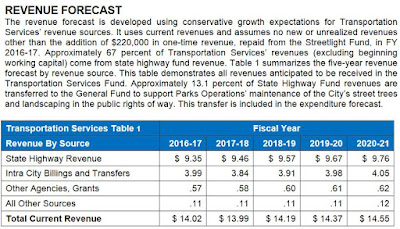 The City's arrived at a draft budget. Part of that is a forecast. Here it is on transportation:


The primary funding source for Transportation Services is the City’s monthly allocation of state highway fund revenues, which include motor vehicle fuel taxes; heavy commercial vehicle weight / mile taxes; and title, licensing, and registration fees from the Department of Motor Vehicles (DMV). The state highway revenue represents 67 percent of the Transportation Services Fund total current revenue. The statewide motor vehicle fuel tax is currently 30 cents per gallon of retail fuel sold. The City’s allocation is based on a per capita distribution of the portion allocated to cities. Salem’s current share of the city apportionment is 5.80 per cent. Fuel tax revenue is sensitive to economic factors such as the regional price and availability of fuel, incorporation of fuel-efficient vehicle technologies, and consumer behavior. [italics added]

A couple things to note. First, in round terms, the gas tax is funding only 2/3 of the Public Works budget.

Additionally, this is an operations budget, not one for capital projects, so a lot of it is for payroll, not for asphalt and concrete. When it is for materials, it is for pothole repair, not road widening.


Expenditures in the forecast are proposed to include the restoration of two previously eliminated positions – a senior traffic technician (all five years) and a signs and markings worker (four years). In addition, two positions to support street maintenance are proposed with a cost offset through a reduction in the expense for seasonal workers and the elimination of another position. The conversion of seasonal positions to full-time positions addresses limitations in how seasonal workers can be employed in compliance with the Affordable Care Act. The additional positions respond to capacity shortages in street and sidewalk maintenance services. 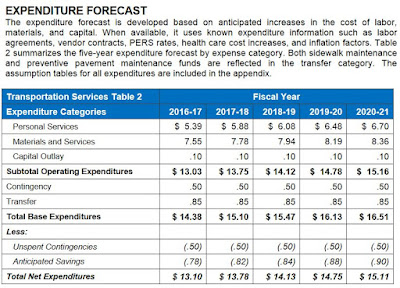 While the specific details might differ, in general our situation here reflects the national situation. The gas tax and user fees don't come anywhere close to paying for the road system.

There is an tremendous subsidy and transfer from things like home value to roads. We subsidize autoism a lot. Cars don't pay their way.

The rest of the budget documents are here. Public Works is mostly in book 2, but I'm not sure there's anything additional to say. Maybe there will be later.

It looks like the next event will be a formal Public Hearing at Council on Monday, June 13th.

There are a few interesting things in the neighborhood associations this week.

It's always frustrating and darkly amusing to read the gyrations involved in school drop-off/pick-up accommodations. Grant is gridded, flat, compact, and it should be easy to walk and bike. Free parking, too, is problematic. In the minutes to the last Grant Neighborhood meeting was another discussion:


Teresa Tolento, principal at Grant, was present to explain the proposed new student pickup configuration for dismissal . She has been working with Salem - Keizer School District Transportation Dept and Salem Public Works. The plan will extend the loading zone along Winter Street by about 25’ to the north of the current zone. There will be no pickup on Cottage and that is proposed to change to a 2 hour parking zone. The neighbors recommend that they enlist city parking enforcement to keep a watch and enforce during the instigation of the plan on both Cottage and Winter streets. Neighbors also suggested that the parking along Cottage may be more effective if it were 90 minutes, so that it is not longer than the parking limits within the surrounding reside ntial permit parking areas. State employees will still use it if they can walk north and move their car within a 2 - hour time block. Unfortunately, like the library, or downtown area, there will be no meters to act as enforcement. There was also a discussion and recommendation to speak with Kevin Hottmann at the City about whether a “volunteer” pass could be utilized by volunteers at Grant School to be able to utilize a longer parking time. Tim reminded Teresa that Salem Alliance Church’s parking lot on the corner of Hood and Cottage is always available for free to staff and visitors. Mike moved that “Grant Neighborhood support the proposal and recommend that the parking on Cottage be regulated to 90 minute time blocks.”

It just seems like we keep talking around obvious solutions!

At NEN there will be a presentation on an improved crosswalk on Market Street!

At downtown at CANDO, they'll be talking some about the Winter-Maple Bike Boulevard project.

since this is a bike advocacy group, it is natural that you think that riding your bike or walking to school is a no-brainer. But I wanted to share that a few years ago a great effort was made to overcome one of the major hurdle to kids biking or walking to school...safety. A grant was received by Salem-Keizer Schools to initiate 'walking buses' in several schools. It involved creating walking groups from nearby neighborhoods to school so that parents would feel it was safe enough to let their children use that mode. Parent volunteers would gather children at set locations and walk them to school. It was somewhat successful, but took a great deal of effort and coordination to keep going.

The bottom line is that parents...myself included..,will not risk my child or now grandchild's life just to help traffic congestion. The risk of stranger danger is real. But more than that, it is not safe to let children walk or bike to school, even if there are sidewalks, bike lanes or traffic guards at major streets.

The worst places where children are struck is right in front of schools. Having been a school crossing guard at one time, I know that cars do not respect pedestrians.

So, it is fine to advocate for such things, but it is essential that we all recognize that the situation around schools is not going to go away. The best we can hope for it that we have ample eyes in the area to watch kids, enforcement of speed zones and constant reminders to parents not to encourage their children to run across the street to get to their car.

BTW, when my children were going to elementary school, I walked with them. Now that I have grandchildren, I walk them to the bus stop even though it is just a block away. Frankly, I wish that all children who live more than 6 blocks from school could ride a bus again.

Briefly, just to address one point (there might be more to say later)...

A few years back the NY Times reported that "About 115 children are kidnapped by strangers each year, according to federal statistics; 250,000 are injured in auto [crashes]."

This is an example of ways that our risk-assessment is meaningfully out of whack. Being in a car is far more dangerous!

The situation at schools can change!

You don't mention the school, but I believe the program was tried at Hallman Elementary, and for a variety of fairly specific reasons Hallman is more challenging than Grant would likely be. (Here's a 2013 story from the Statesman that OPB picked up.) It would be interesting to learn more about the challenges - there has not been a full public review of the project, I don't think, and there ought to be. It is probably not yet accurate to say "we tried it and even though we did everything in our power to succeed, it didn't work."

Part of the context, too, is that the School District hasn't embraced walking and biking with real enthusiasm and commitment. If it's treated as a lark or a non-essential program, it is not being positioned for success. Leadership matters. Many of the success stories I have read about start with a Principal who is fully committed, and this has seemed to be lacking here.

Schools in Portland and Eugene and elsewhere have conducted strong walking and biking programming and it has worked. It's highly unlikely that there is some special reason it cannot work in Salem.

(Also, you write "cars do not respect pedestrians." It is a small point, but an important point: People driving may not respect people on foot. This is like the "the car struck the pedestrian." Cars are under the control of a human operator, and the operator, not the car itself, has agency and responsibility.)

Eugene has a full time coordinator I believe. Programs in Eugene and Portland seem to rely on a lot of young college age volunteers to organize the bike trains and similar activities. Groups like the BTA actively recruit them to keep these programs going. Parents then embrace it as a before and after school activity. We don't seem to have that here and we don't seem to have a large pool of young volunteers to draw from. It just doesn't seem like a high priority for parents so I think its hard to fault the district for that. Kids are so heavily programmed these days and on such tight schedules that its really hard to get parents to even consider complicating their schedule with biking or walking.

While Grant School is in a great walking neighborhood, many of the students are driven in from long distances for the bilingual program. In this case, it's not necessarily a driving vs. walking choice. It's a specific program choice. That being said, I agree that we can make change for the better and that it takes leadership to see it happen.