Will it be a walk of shame, a walk of horrors, or just a plain walk?

On Friday the 13th the Public Art Commission will check out our alleys downtown.

They've long been a source of fascination and an attraction for improvement schemes. Back in 1984 the Salem Tomorrow plan made some proposals.

The City did act formally on the alleys just a few years after the report came out.

But we still haven't fully leveraged that investment.

The most successful of public art installations on the downtown alleys are almost certainly the Grasshopper and Fly from 1988. They're at least the most charming. About them a person wrote, "I used to work across the street from the fly, but I never knew the story behind it or even the existence of the grasshopper." There's quite a mural on side of the alley opposite the Grasshopper, and still people don't travel the alleys or look around enough to notice them.

The problem with the alleys isn't the amount of public art and decoration in or on them.

The problem with the alleys is that we don't have interesting businesses on them, we also have too many parking lots associated with them, and they connect to streets that can be too busy, some of them state highways. They are insufficiently walkable.

Another alley should provide proof of this. 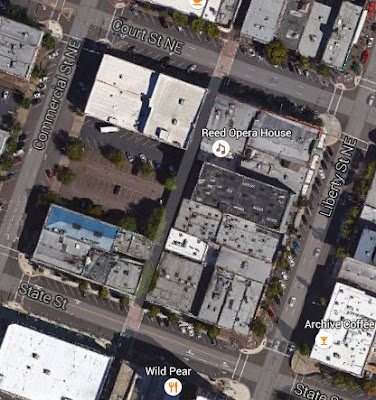 The alley in the block bounded by State, Liberty, Court, and Commercial should be anchored by the Reed Opera House.

It used to have continuous storefronts on all four sides, but fires and demolition created a large parking crater on Commercial Street.

In the 1996 Downtown Plan, there was proposed for the parking lot a new building and a plaza.
Nothing ever came of that redevelopment concept, but there is new life today on the alley.

With the first phase of the restoration on the Grey Building, Amadeus put in a very nice alley entry. One of the Arta-Potties has been placed near there. And just this month the Vagabonds started the soft-opening for the Victory Club.

The Victory Club, and just one block north, the 1859 Cider Company, which will also open from the alley, seem key to the actual renaissance of our downtown alleys.

It's the walking arising from business activity, and not principally the art, that will make these spaces lively. This summer should provide strong evidence for this claim. (Or disprove it, it's true!)

This is not to say that art or other street furniture will not be useful. But they are seasonings that lift, elevate, and complicate. The business activity and attractive storefronts are the onion, the stock, and the salt - the foundational flavors.

The reason the "Penny's Plaza" doesn't work is because there's a parking garage on one side, a small parking lot on the other, and a business entry that is superfluous because there are also two other entries on Chemeketa and Liberty. Most significantly, the skyway above the alley stole most of the foot traffic between the parking garage and the store. Even the elevator entry is turned around so it doesn't make any connection with the alley.

It looks like it's supposed to be friendly for people on foot, but it's actually profoundly autoist.

And rather than creating interesting circulation, it is a pocket for loitering and an unattractive void in the fabric of our downtown blocks.

As they consider our downtown alleys, the Public Art Commission and the Downtown Advisory Board's streetscape committee should give strong consideration to structural problems with alley circulation and not merely think of surface decoration. Just applying bric-a-brac to the surface of things will not by themselves enliven them.

The Public Art Commission will meet "in the Alley between JCPenney's and the Chemeketa Parkade" on Friday the 13th at 10:00am.
Posted by Salem Breakfast on Bikes at 9:00 AM

There's a proposal out now to name the alleys at the HLC.